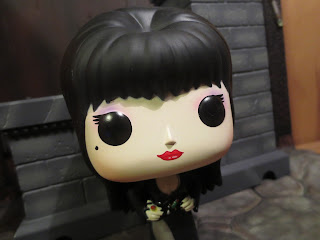 Originally I intended for Elvira to be part of 31 Days of Toy Terror or Re-Halloween 2016 but by the time I finally was able to pick her up it was almost Halloween and the schedule was already completely filled. Now it's December and I'm reviewing Elvira. I've been a fan of Elvira since I was in Middle School but I can't say I've picked up many Elvira collectibles or action figures over the years. I was thrilled to see Funko move the Mistress of the Dark into the POP! line, and I guess the POP! Television range makes the most sense due to her debut in Elvira's Movie Macabre in 1981. Let's get better acquainted with this ravishing horror host, shall we? Join me after the break... 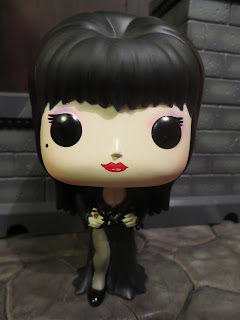 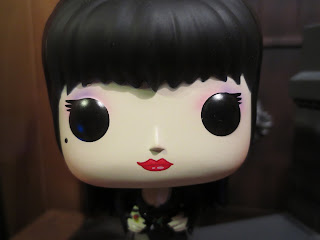 * Nailing a basic human face as a POP! is more about capturing a few simple details and Funko has done a pretty nice job with Elvira. Her lips actually look to be more of a tampographic stamp rather than just a paint application and her makeup is pretty distinctive: She has the blue and fuchsia eye shadow, long eyelashes, and her signature beauty mark. 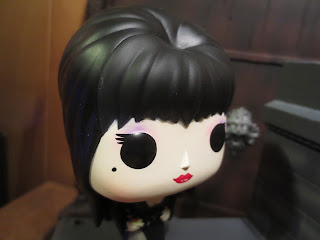 * What really sells this as Elvira is her distinctive hairstyle. It's kind of like a beehive and I seriously doubt many people other than Elvira could pull it off and make it work. 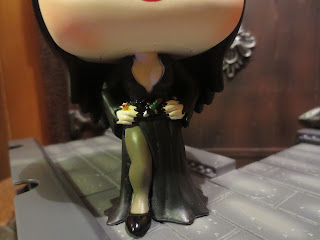 * Folks, I gotta apologize because I have the hardest time in the world photographing the bodies of POP! vinyls. I guess it's because of the large head which casts shadows down onto the smaller body. That being said, this is without a doubt Elvira. The curves, dagger, and sassy pose are all accounted for. Funko did a nice job with this one. 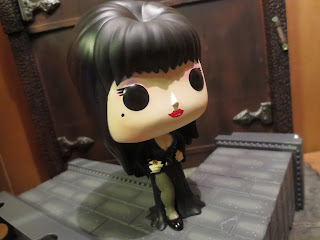 * Elvira, like the Elsa POP!, has that really cool "leg stepping forward out of the slit in the front of the dress" thing going on here. Not only does it look wicked cool but it helps to keep the hostess with the mostess standing firmly on your shelf! 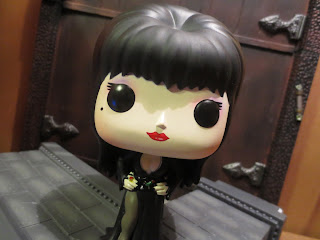 If you're a fan of Elvira then I doubt there is any way you're going to be able to skip this Funko POP! of her. It's a cool little collectible and is instantly recognizable as the Mistress of the Dark while still having the distinctive Funko POP! style. She's not the most complex POP! ever, but it's clearly Elvira which means it's a lot of fun. I love these more unique and one-off POP! vinyl figures, as they add something really special to your collection.

For more POP! Television figures, check out the following reviews: