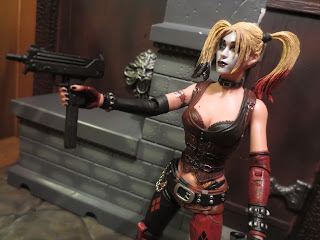 Want to hear something pretty crazy? I'm pretty sure that this is the first recent NECA figure that I've reviewed this year. They just haven't released that much stuff that's captured my attention this year. Fortunately, they managed to capture my attention this year with a new Harley Quinn figure. This is actually a scaled down version of their 1/4 scale Harley Quinn from Arkham City (which I really want) but down in a 6-7 inch scale. NECA has released a few Batman figures and a Christopher Reeve Superman in this style but Harley is the first figure from them I've picked up. I managed to find her at my local Toys 'R Us and she was the last one on my shelf. 2016 has absolutely been a huge year for Harley Quinn and it's nice that NECA is paying her some tribute before it's over. Let's check out the first lady of Arkham City after the break, shall we? 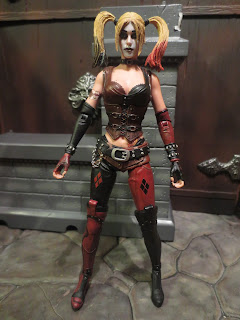 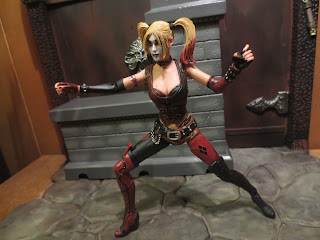 * Harley has some incredible articulation! There isn't an overwhelming amount of joints but everything is here to put Harley in some great poses. Things like the balljointed mid-torso and head really add a great deal of expression to the poses she can take. Heck, even her pigtails are articulated. She's quite sturdy, too. NECA has had some trouble with breakage on some of their DC figures but this one feels absolutely solid. 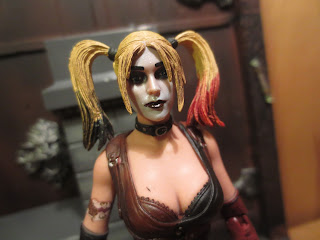 * Arkahm City was definitely a turning point for Harley Quinn in popular culture. While Arkham Asylum gave her the sexy nurse outfit, that kind of seemed like a specific costume for her in that scenario. Arkham City's new outfit and pigtails with red and black dyed tips definitely felt like something new (although some folks hated it at the time). I love the look and the hair is really nicely done. The pigtails actually swivel to help complement poses and the paintwork is gorgeous. 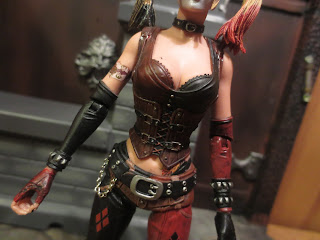 * Harley's outfit is incredibly detailed and NECA has captured it very well. The corset-like top has lots of different buckles and textures that help to add to the complexity. Of course, there's also a really cool belt with a real metal chain on the side. 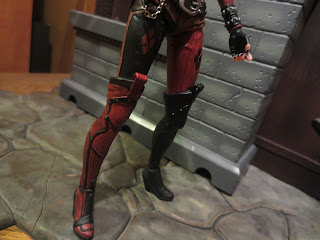 The paintwork is pretty good and features that grungy Arkham-verse aesthetic that kind of defines the style of those games. Everything looks neat and clean while still having a bit of that "rough" look that makes for a more interesting looking figure. Harley's boots are wicked cool and a great example of the quality work NECA has done here. 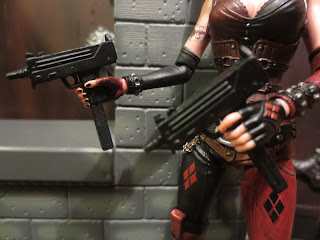 * Harley comes with two submachine guns that kind of look like Ingram MAC-10s. They're pretty cool, although the sculpts are a bit softer than I'd expect on a NECA product. They fit beautifully in Harley's hands, though. 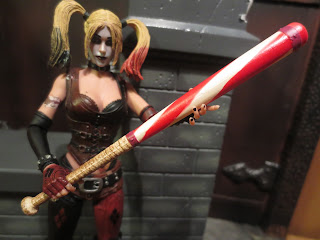 * More than the machine guns, Harley is remembered for wielding a colorful baseball bat in Arkham City. While she's most commonly identified with a mallet, the baseball bat has become a pretty well known Harley weapon, especially thanks to the Suicide Squad film. This bat looks great and has a fairly detailed paint scheme. 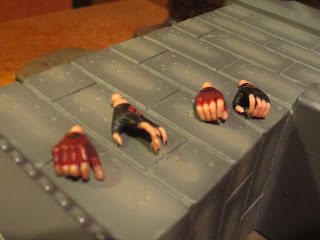 * Harley comes with four interchangeable hands: Two right hands and two left hands. They're true balljoints and they swap out very easily with little concern for breakage. There is a set of hands designed to hold the submachine guns, a right hand for the baseball bat, and a gesturing left hand. 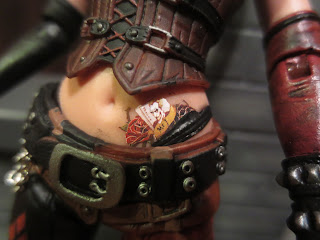 * Check out Harley's tattoo. It's really, really detailed and really, really small! The tattoo print is crazy good and is peaking up right over Harley's waistline. There's another tattoo on her right bicep that's also pretty impressive.


* There's something about Harley's face that just seems off. It's not a bad headsculpt at all, but it strikes me as more of a really good Harley Quinn cosplayer rather than the Arkham City version of Harley. The expression is also a bit lifeless for Harley, if you ask me. 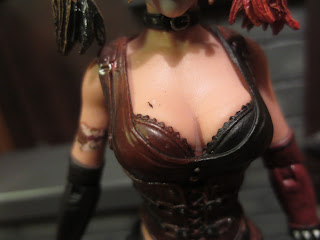 * Yes, there is a very obvious splotch of black paint on Harley's right breast. Awkward. 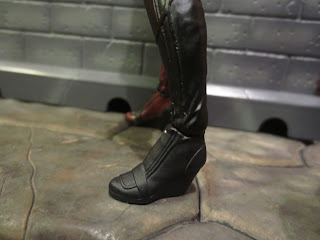 * Harley's boots are really cool but they definitely make it difficult for her to stand up properly. I wish NECA had included a display stand for her. Even a simple black or clear disk would have been welcome. 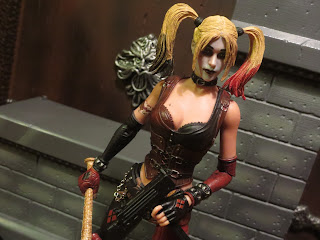 I'm not sure what's going on with the DC licensing that's letting NECA release figures of those characters but I'm glad they're getting the chance. At this point, I'd love to see NECA get the chance to tackle some DC property themselves without having to do just a scaled down version of one of their impressive 1/4 scaled figures. Harley is a Great and a 1/2 figure and a great tribute to a pivotal media appearance for the character. There are a few little flaws here and there, but this one is worth the hunt.