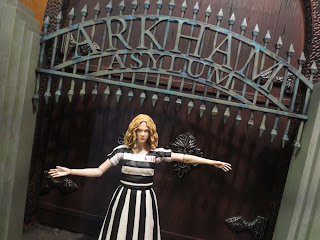 Disclosure: As of this writing I've only watched maybe 4 or 5 episodes of Gotham. I like what I've seen (although the concept is still kind of strange to me) but I just have a really difficult time sitting through TV shows for some reason. Still, I'm a sucker for Batman related action figures, especially those based on more obscure characters or characters never before made as action figures. As part of series 3 of their Gotham line, Diamond Select Toys has released some pretty interesting characters: A young Bruce Wayne, Victor Zsaz, and Barbara Kean. Today I'm looking at Barbara Kean, young Jim Gordon's fiancee who apparently ends up doing some time Arkham Asylum. I'll be 100% honest: While it's cool to have a figure of Barbara Kean-Gordon, the biggest reason I picked this figure up is because of the giant Arkham Asylum included in the package. How cool is this, right? A new Batman character and an Arkham Asylum gate? Incredible! Let's check this one out after the break... 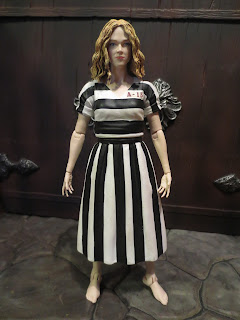 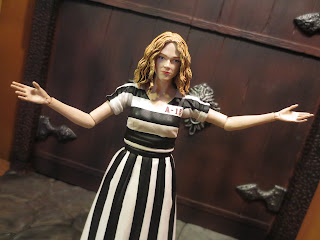 * Looking at Barbara Kean from the waist up, she's a pretty cool figure. I like the movement on her arms, her expressive hands, and the fit of the Arkham Asylum issued dress. It's got a cool vibe that definitely isn't "modern" but it fits the odd mixture of time periods that so many successful Batman shows and movies try to capture. 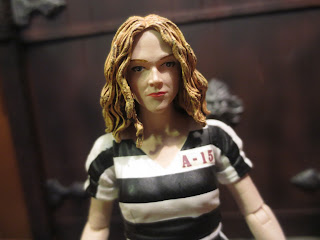 * It's tough to tell how much this portrait resembles actress Erin Richards as Barbara Kean because the figure is sculpted with a bit of an angry facial expression. It's incredible how much a facial expression can change the appearance of a sculpt. It's a nice looking portrait, though, and the hair is quite well done. It looks rather unkempt, befitting someone staying in Arkham. I also like the A-15 inmate number on the front of the dress. It's just a cool little detail. 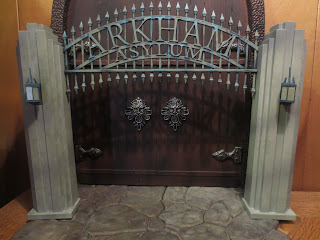 * And here's the reason that I bet most people are picking this figure up: The Arkham Asylum gates. Well, know, their aren't any doors or anything, but how cool of a display piece is this? It comes in three pieces and stands 10 5/8ths inches tall at the apex and around 13 1/2 inches long. Remember that Toys 'R Us sells versions of these figures for a cheaper price without the diorama accessory. Looking at this piece, who would buy Barbara Kean and not want the Arkham gates? 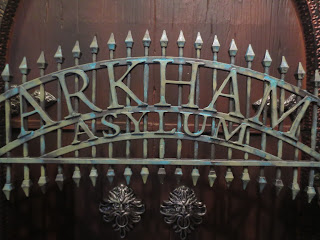 * The Arkham Asylum name on the top of the arch is really impressive. The sculpt is very sharp and just looks fantastic. The paintwork mixes a few colors to make the fence look aged. If you pick this one up, there's no way that this accessory isn't becoming a key part of your Batman display. 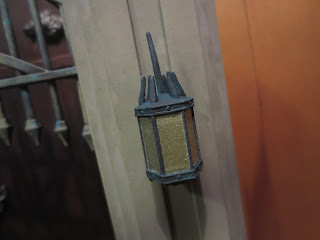 * These little lanterns are pretty cool, too. They also kind of have that greenish-blue patina that metal sometimes gets with age. 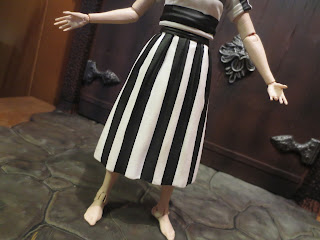 * Barbara looks like she has some great leg articulation but it's completely useless underneath that striped dress. The dress is just a big, hollow piece of hard rubber that keeps her legs from moving. It also has some questionably painted lines and doesn't really have any shape to it. Just disappointing, really. 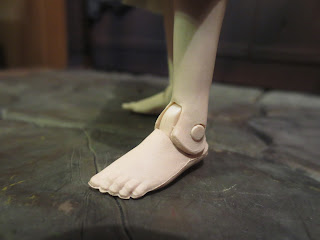 * Barbara has some really odd looking swivel/ hinge ankles that absolutely mar the sculpt. Considering that running around barefooted seems to be part of the character's look here, plus knowing that her dress essentially makes her unable to be posed below the waist, it's odd to see Diamond add these in. They're really awkward and they actually make it harder for her to stand. 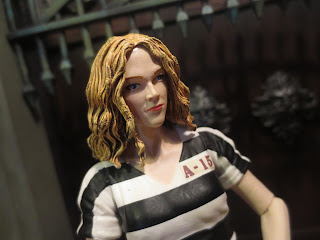 Barbara Kean by herself isn't a very good figure. It's cool to get a figure of the character but the oddly chosen facial expression and the useless lower body just don't really work. As a figure, she'd be an easy pass and receive an Eh rating. Throw in that Arkham Asylum sign, though, and this package really elevates. Action figure dioramas are far and few between and this one is definitely worth considering. At $22 bucks, I think collectors who display their figures or photograph them should definitely consider the sign. I have a feeling it's going to be prized by Batman collectors once everyone discovers it. 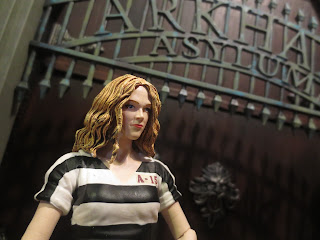 This is the first figure of Barbara Kean that has ever been released, so that's kind of cool. The only other Gotham figure from Diamond Select Toys, I've reviewed is Harvey Bullock, so check that one out.