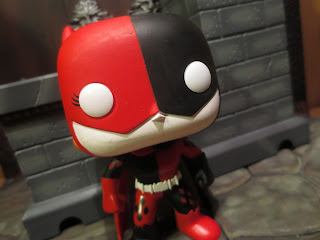 Today I'm looking at a very unusual POP! from Funko's DC Comics POP! Heroes range of vinyl figures: It's Harley Quinn disguised as Batgirl. Called an Impopster, this is a completely unique concept seems to have created rather than something from a DC Comics storyline. It definitely seems like something Harley might do, though, so it's not utterly ridiculous in concept. It's kind of fun, actually, and definitely appeals to me as I love both Batgirl and Harley. It uses the Batgirl body that was used on the original Batgirl POP! Let's take a look at this rather unusual POP! after the break... 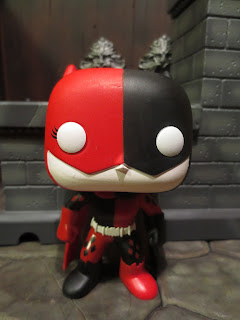 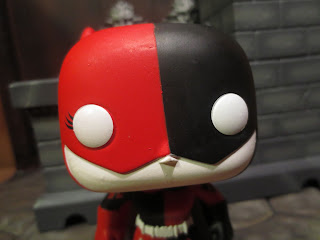 * The first think you notice about this Harley Quinn Impopster is those round, white eyes. They definitely set a different vibe which helps to really give you the idea that something is off with this figure. That's a good thing here, though, as it makes the red and black painted figure seem kind of mysterious and even a bit sinister. The color scheme here really is quite fantastic. 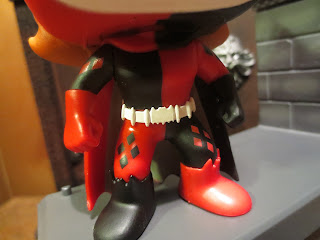 * The earlier POP! figures had chunkier, less descript bodies, so that's what you're seeing here with the Impopster Harley Quinn. Still, there's some nice detail such as the utility belt (now white) and the bat shaped cuts on the boots (now alternating red and black). 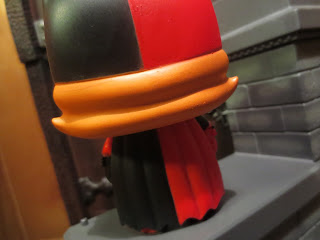 * On the back of the figure you can see some red hair cascading out from underneath the cowl (did Harley dye it or is she using a wig, ala Yvonne Craig?) and the cool half red/ half black cape. Again, I just really like this color scheme. It's very striking! 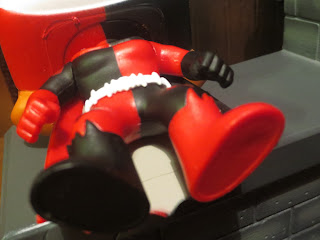 * This is a tough one to photograph but, if you look at the back of Harley's cape visible between her legs, you can see that it has been left unpainted. I'm not sure why this was done (cost saving measure, perhaps?) but it really is odd. The grey doesn't match anything else on the figure so I doubt it is "intentional" in the sense that it's a design choice. 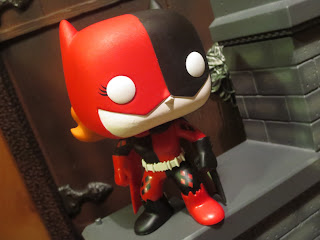 Is this just a repaint? Yeah, but it's a fun one. It really does seem like a fun storyline for Harley to try and imitate Batgirl, so I'm giving Funko some props for doing something a bit unique here. The colors scheme is great and the white eyes give the figure a unique appearance in the series. It's a cool addition to either a Batgirl or Harley Quinn collection and I'm giving it a Good and a half rating.

There's actually another figure in the series with the same name but a different number. It's Harley Quinn Impopster #124, which is Harley as Batman himself.

If you're just looking for more POP! Heroes, check these out: