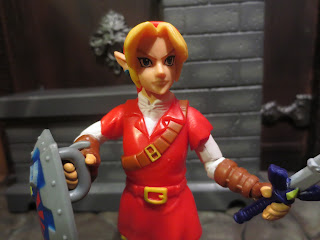 I'm finally breaking into series 2-3 of Jakks Pacific's World of Nintendo line and it's with another figure of Link from The Legend of Zelda: The Ocarina of Time. I'm actually currently playing the Nintendo 3DS version of this game (I picked it up on Black Friday) and it's been one of my favorites since it's original release. Jakks has given us a few characters from the game so far and this is also their third Link variant from the game. I've not been a huge fan of the past incarnations of this figure for a couple reasons, particularly the off articulation scheme and the difficult to attach shield, and I'll go ahead and let you know that this figure isn't improved at all. Link in Goron Tunic simply features Link in the red Goron tunic that allows him to withstand the extreme heat of the Death Mountain crater. It's a repaint, but at least it's a game accurate repaint. Ready for a closer look? Then join me after the break... 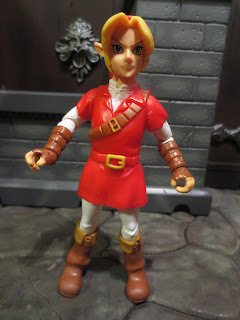 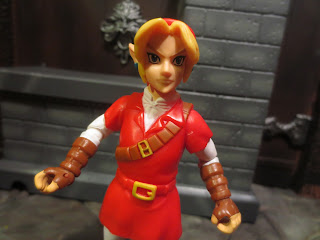 * As I mentioned above this figure is absolutely a straight up repaint, and thus the only real difference between this Link and the original version is that his tunic is red. It looks good, and it makes sense as a variant, so it's not a complete waste. Again, check out my full review of the standard figure released earlier this year for all of the details. 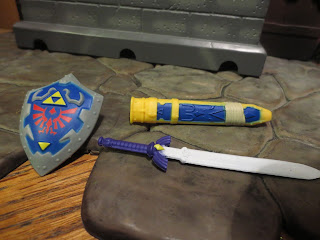 * Goron Link includes all three accessories that the standard version included. They're still cool, sturdy accessories, although the shield is a pain to get on Link's hand. Actually, it's almost impossible. Put it on and leave it on is my recommendation. 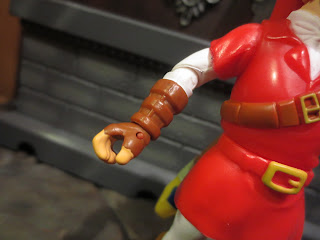 * Considering that Link in the Goron Tunic is not only a simple repaint but the second repaint of this same exact mold released this year (Shadow Link uses the same mold), I really wish Jakks would have thrown something else in to make this a bit more appealing. Link's bow, a bomb, or the Megaton Hammer all would have been really cool additions to the figure. 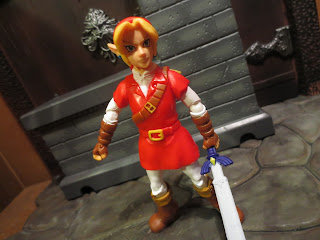 Honestly, this is a pretty Eh figure, just like the previous release. It's not any bad or better than the original release and maybe a bit worse since it doesn't come with anything new or unique, especially considering the price on these figures has jumped up a bit over the past 6-8 months. I really considered skipping this guy but the thought of being able to add a unique looking Link to my collection got the better of me. I'd be completely open to more Ocarina of Time figures, but only if Jakks redoes the articulation or offers some new accessories.

I've reviewed a couple of Link toys on here including a Link figure offered as a preorder bonus for Ocarina of Time back in 1998, and from World of Nintendo the Skyward Sword Link, the Ocarina of Time variant of Link, the Windwaker Link, and Shadow Link.

For more World of Nintendo reviews, check out the following: