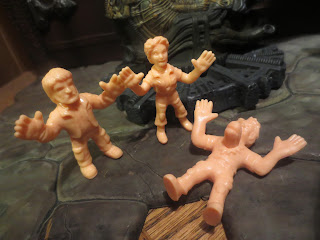 Pack D is the last of the Alien M.U.S.C.L.E. sets I'll be looking at, since it completes the series. It features Dallas, Lambert, and Kane with Chestburster and completes the crew of the Nostromo. Honestly, I'm not sure there has ever been a toy of Lambert before, so that's pretty cool in and of itself. I really like what Super7 is doing with the M.U.S.C.L.E. line, although I'd love to see more Kinnikuman figures, although a different company owns the rights to that property. Let's take a closer look at these Alien minifigures, shall we? Join me after the break... 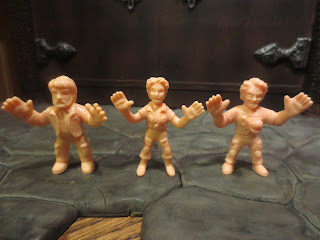 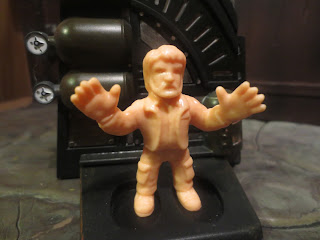 * Look! It's a George Lucas minifigure! Wait, wasn't Alien directed by Ridley Scott? Oh, this isn't Uncle George: It's Tom Skerritt's Dallas, the captain of the Nostromo. The hair is right but the sculpt overall just looks really soft. Much softer than most of the other figures in the line. He's also got that weird hollow eyeless thing going on that has plagues a number of the humans in the line. 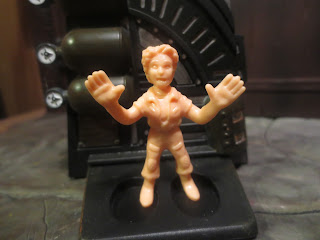 * Veronica Cartwright's Lambert, the Nostromo's navigator, is posed with a look of terror on her face, reflecting the scene where the alien chestburster makes it's way out of Kane's chest and into the bowels of the ship. Again, I like the body sculpt and the more M.U.S.C.L.E. inspired proportions (big hands), but the odd looking eyes still turn me off. Maybe it was a compromise to get around likeness rights? 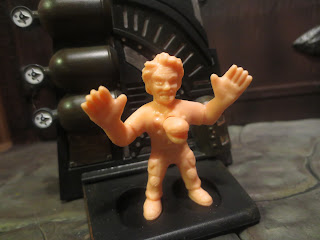 * John Hurt's Kane definite has some of the most memorable scenes in Alien, so it makes sense that Super7 has given him three figures in the series. This one, Kane with Chestburster, depicts Kane with the alien bursting through his chest. It's a decent, if somewhat soft sculpt, but the face is pretty good. The expression actually looks better than most of the other human faces, probably because his eyes are supposed to be shut. The little chestburster just too cool, as well. Darn, that's such an incredible scene, isn't it? 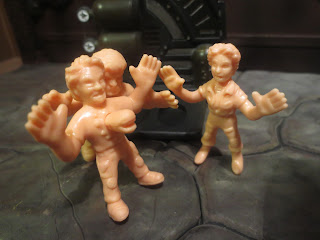 Due to Super7's odd choice of making the face sculpts kind of soft with hollow looking eyes, this is easily the least impressive set in the series. I like the work on the outfits, but the faces just bring this one down. I imagine most folks are going to want the complete crew, plus having a chestbursting Kane is an understandable want, too. This is a Good set, but a bit flawed. The presence of great minis in the other sets helped cover the flaws of the standard humans, but this set shows them completely. Still, at $6 bucks a pack, these are definitely affordable and the sheer novelty of them alone basically sells them.

The only character in this set that I've reviewed other figures of is Kane. I've also reviewed  Kane in Spacesuit from Pack B and the ReAction Kane (with Chestburster).
For more M.U.S.C.L.E. reviews from both Mattel and Super7, check out the following: