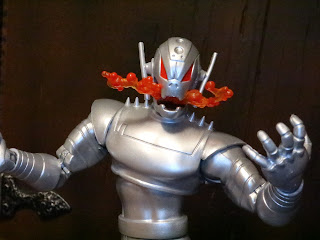 Ultron has been plaguing the Avengers for over 50 years and while both Toy Biz and Hasbro have released many different versions of the murderous synthezoid over the years this is the first time we've gotten a truly classic looking version in Marvel Legends. Ultron is definitely one of the most wanted figures from the Iron Man/ Ursa Major series of Marvel Legends so he might take a bit of effort to track down. He's worth it, though, as he's a truly worthy upgrade of the character. Let's check out this modern take on the classic character of Ultron after the break... 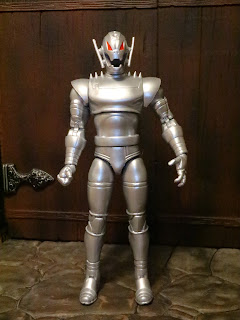 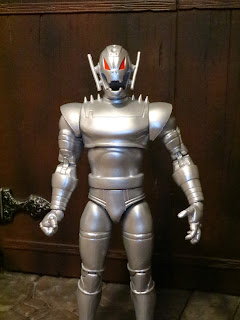 The Positives:
* What to say about Ultron? First off, he just looks fantastic. Very menacing with a great design. Not overdesigned, either; his body looks like something you would see in a classic sci-fi film. It's still "human" looking but given some armored elements to spice things up a bit. I also love the silvery plastic or paint Hasbro used. Often Hasbro has used a swirly, pearlescent plastic on metallic figures but this is a straight up slightly shiny metallic plastic. It looks so good on Ultron! 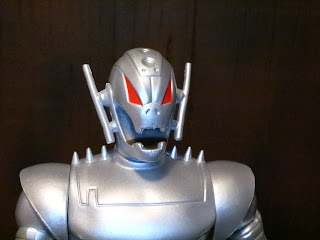 * The headsculpt is perfect. It's very faithful to the comic look of Ultron and it just has so much character in it. I love the massive open mouth and those angular red eyes. 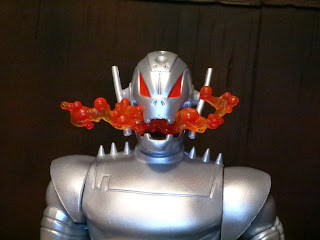 * To make things even better Hasbro included a cool reddish-orange energy effect. It fits in Ultron's mouth to give off the illusion that his body is discharging energy of some sort. It's a neat little piece that adds a nice splash of color to the figure. It also makes him seem like he's breathing fire or vomiting blood, both of which bode well for him getting to go on tour with K.I.S.S. in the near future. 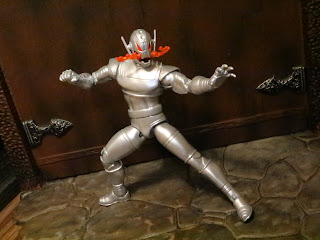 * The articulation is excellent. It's smooth, sturdy, and all of the joints work just right. I particularly love the balljointed torso. It's well hiden and gives the figure an excellent range of motion for dynamic poses. 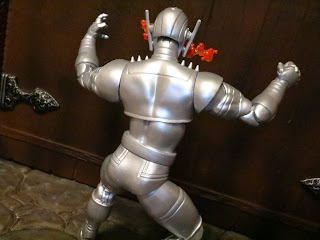 * Here's another shot of Ultron to show off his cool silvery paintjob and his cool shoulder pads. The shoulder pads rotate on their own (they're not attached to the swivel/hinge joint) so you can have all of the parts move as needed. Hasbro did an excellent job designing this guy. 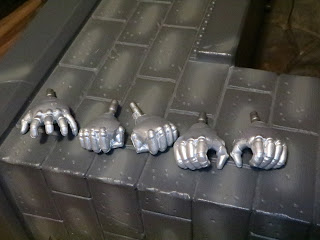 * Ultron comes with five interchangeable hands: An open left hand, a pair of fists, and a pair of standard grips. They swap out nice and easy and give you some options for displaying the figure. 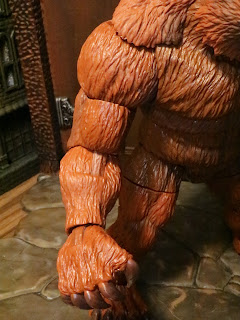 * Originally there were only two figures I wanted from this series: Ironheart and Ultron. When I saw Ursa Major, however, I knew I was going to be picking up some figures I hadn't planned on buying. I'll get around to reviewing the giant bear soon (I have him completed and he's pretty darn nifty!). Ultron comes with Ursa Major's right arm. 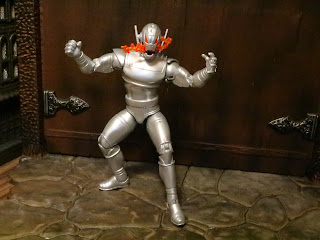 Ultron really turned out well. There have been many attempts to get him right in Marvel Legends over the past... what, 20 years? Hasbro has finally succeeded, though. A few more energy effects would have been nice but overall this is a really cool figure with superb articulation. I'm giving him a Great and a 1/2 and he along with Ironheart are definitely the stars of this series. I'm glad to have another definitive version of a classic Marvel villain on my shelf. I've actually skipped the Eternals and Age of Apocalypse series so until I get my hands on the couple What If? figures I'm looking for things might be quiet on the Marvel Legends front for a bit...
If you're interested in past Ultrons I've also reviewed the Marvel Legends: Iron Man 3 Ultron.
For more Marvel Legends Series reviews check out the following:
Marvel Legends Series by Hasbro (2016)
Crossbones
Darkstar
Enchantress (Mystic Rivals)
Firestar
M.O.D.O.K.
Nico Minoru (Mystic Rivals)
The Punisher