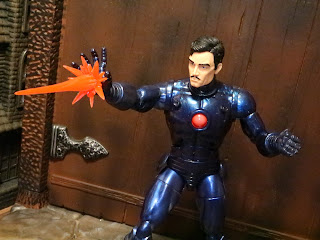 Who's sneaking in to steal all the candy this Halloween season? Why, it's Stealth Iron Man of course! The Iron Man/ Ursa Major series of Marvel Legends figures isn't the newest Marvel Legends series anymore. Heck, there have been three sets to have been released since this one: The second Age of Apocalypse series, the What If? series, and the Eternals set. I picked up Stealth Iron Man for two reasons, the first of which was I really wanted to build Ursa Major. The second reason, though, is that I loved the 1990s Toy Biz Iron Man toyline and Stealth Iron Man was released in that series as well. Ready for a blue Iron Man? Of course you are! Let's check him out after the break... 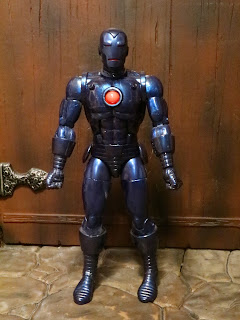 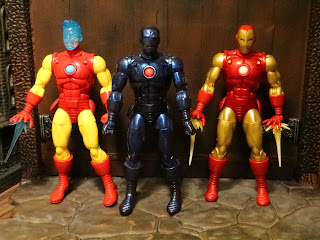 Comparison:
* Hasbro's getting some mileage out of this sculpt! Stealth Iron Man is in the middle while Tony Stark (A.I.) is on the left and the 80th Anniversary Iron Man is on the right. These guys share the same bodies which works just fine. The paint applications on Stealth Iron Man really do make him look quite different from the rest. 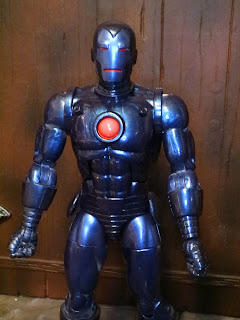 The Positives:
* The blue body has that swirly look to it that doesn't always work on metal figures but I think it actually looks pretty darn fine here. The body is clearly armored, but in an old school way and not in the modern looking way that the movie depicted Iron Man's armor. It really does look like the classic depictions of this suit. Tony's arc reactor is red here offers some nice contrast to the metallic blue suit. 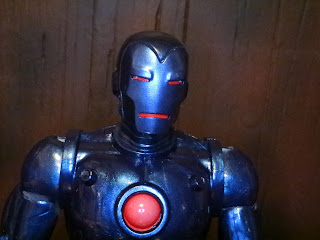 * We've seen this classic Iron Man dome a few times now. It matches the armor and has red eyes and a red mouth to match the reactor on his chest. Looks good to me. I especially like how the face plate is a shade lighter than the helmet just to add some contrast to the suit. 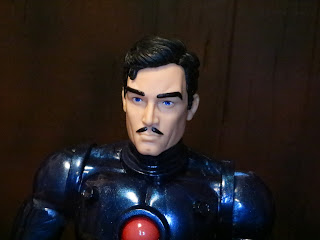 * Want to show off Tony Stark's handsome mug? Here you go! This is the same as the headsculpt included with the 80th Anniversary Iron Man but since that figure is a bit tough to find I doubt most folks will mind having a second chance at it. It's a good sculpt and is very recognizable as a classic Tony likeness. 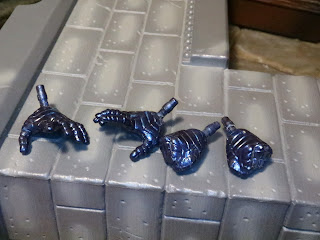 * Stealth Iron Man comes with two sets of hands: Standard fists (with hinged wrists) and open palms that can hold the included repulsor blasts or be used for flying poses. They swap easily and give you some nice options when displaying your figure. 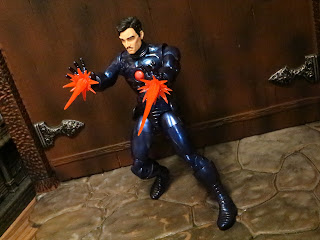 * Iron Man is always a fun figure and the Stealth Iron Man figure is no different. The articulation is excellent and there's a lot to pose and play around with. It's solid, durable, and loaded with useful articulation. I'm not really sure that any company makes durable and well articulated action figures better than Hasbro right now. With Marvel Legends, G.I. Joe: Classified Series, and Star Wars: The Black Series, they're at the top of the game. 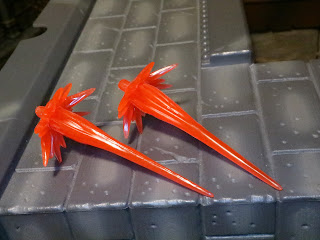 * These energy blasts have with quite a few figures so they're nothing new to most Marvel Legends collectors. Each blast is made from two pieces: A straight beam and a flare that fits over the peg at the bottom of the beam. They can fit on the bottom of Iron Man's boots for flying or placed in the holes on his palms for blasting bad guys. I like the red beams as they contrast nicely with the blue armor. 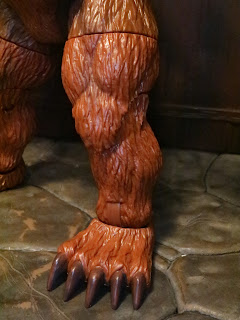 * Originally there were only two figures I wanted from this series: Ironheart and Ultron. When I saw Ursa Major, however, I knew I was going to be picking up some figures I hadn't planned on buying. I'll get around to reviewing the giant bear soon( I have him completed and he's awesome!). Stealth Iron Man comes with the left leg. 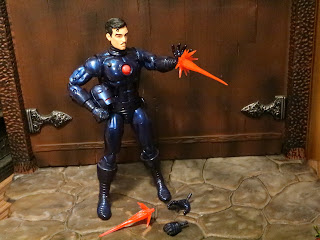 Hasbro consistently puts out excellent figures and Stealth Iron Man is another Great release. Yeah, they have put out a lot of Iron Man figures but lately they've mostly been pretty good. Stealth Iron Man is one of my favorite Iron Mans from this year and he's just a ton of fun. I love the blue and red color scheme which breaks up the Iron Man shelf nicely. The extra Tony Stark head is a key part of this one, too. I do wish that he had wings like the old Toy Biz figure. That was a cool design though I don't think it's at all comic accurate.
Looking for more figures of Iron Man? The check out my reviews of the Marvel Legends' Classic Iron Man and Heroic Age Iron Man and the Marvel Legends Series Tony Stark (A.I.) and Hologram Iron Man.
For more Marvel Legends Series figures check out the following:
Marvel Legends Series by Hasbro (2016)
Crossbones
Darkstar
Enchantress (Mystic Rivals)
Firestar
M.O.D.O.K.
Nico Minoru (Mystic Rivals)
The Punisher