31 Days of Toy Terror: Skeletober! Scare Glow from Masters of the Universe by Mega Construx 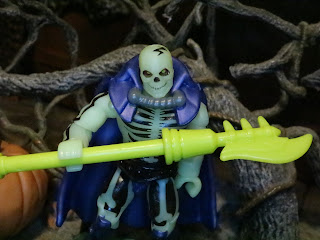 How about today we check out a spooky Masters of the Universe skeleton who isn't Skeletor? Sounds like it's Scare Glow's time to shine! Mega Constux first released Scare Glow back in 2019 when the Masters of the Universe minifigures were still part of the Mega Construx Heroes series. The Heroes series featured characters from multiple different properties, some of which were solid sellers and some of which pegwarmed. Scareglow was part of the fifth series of figures (along with Stratos, Donatello, a grey alien and Mulder from the X-Files, and a blue Xenomorph) which showed up briefly in some Walmart stores and then disappeared as Walmart stopped carrying the Mega Construx Heroes figures for sometime, Fittingly, Scareglow became a victim of Phantom Series syndrome, only showing up at closeout stores like Bargain Hunt and Essex. Since he's so well loved and was so tough to find Mega Construx let collectors know that we would see him again and Scare Glow has finally returned as part of the newest series of MOTU Mega Construx figures. Ready for a ghastly glowing ghoul for a spooky October night? Then join me after the break... 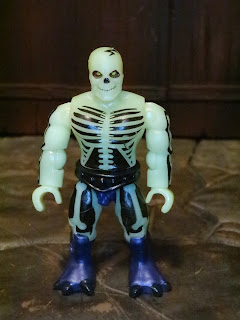 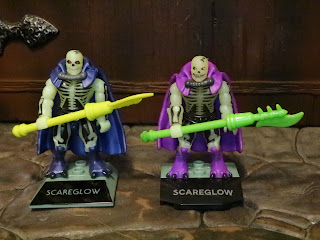 Comparison:
* The new Scare Glow is on the left while the Mega Construx Heroes Scare Glow is on the right. What's differenton the newer figure? The head looks slightly different, his cape and boots are dark purple vs light purple, his halberd is more of a lime green, and he comes with the newer model single piece display stand. 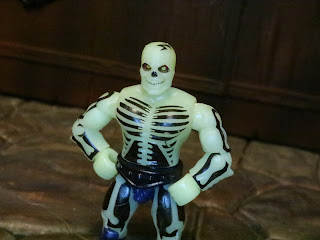 The Positives:
* The vintage Scare Glow figure used the classic MOTU body with painted on lines to show the negative space between the bones and Mega Construx has copies that same design here. Scare Glow is a pretty buff looking skeleton with a very neatly applied bone structure on his torso and on his arms. 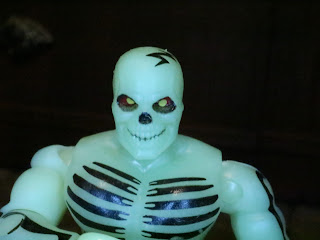 * The headsculpt is really good on Scare Glow and he has some fantastic paintwork. He actually looks a little different than the last figure due to his skeletal grin being a bit smaller (due to the paint). All of the cool details like his glowing eye sockets and the crack on his skull are present and look suitably eerie! 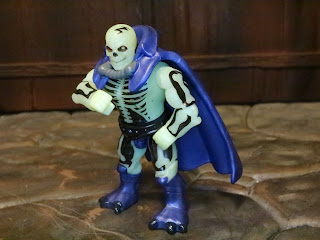 * Scare Glow's cape is cast in a darker purple this time. It's almost blue, really.  It's held on by a peg that attaches to Scare Glow's back and it simply rests on his shoulders. If you want to take it off, you just have to pop off his noggin. While some collectors probably won't like the color change I'm glad we're getting a slightly different figure this time around. 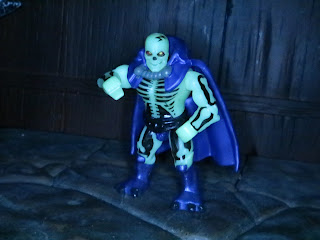 * Scare Glow is known for his evil, paralyzing glow, so it only makes sense that he glows in the dark. Glow in the dark toys are always fun and Scare Glow makes for a great Halloween trinket. Anyways, his glow looks fantastic and he looks marvelous wandering around outside of Castle Grayskull. 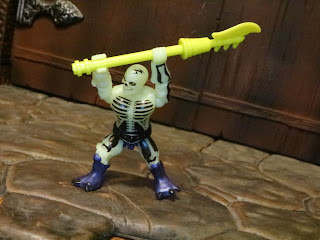 *  Like the rest of the figures in this line Scare Glow is well articulated and ready for battle. These really are some of the nicest minifigures out there and they're incredibly fun. If you haven't picked up on yet and you're either a MOTU fan or a minifigure fan, you really need to. You need more glowing skeletons in your life, right? 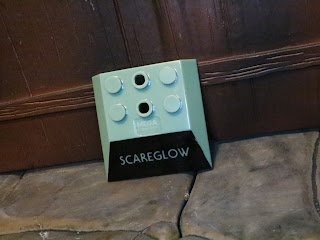 * Scare Glow also comes with a stand. It's a simple display stand with his name on it. This is a great little stand for displaying the figure, even if you want to put him in more extreme poses. 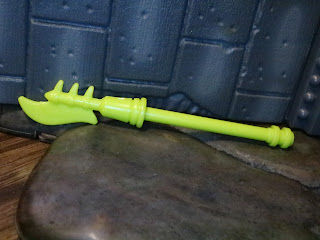 * Scare Glow of course comes with his halberd but now it's a much brighter shade of green which I presume is to differentiate this release from the previous release. It's the same mold, though, and it's made from two pieces. The same halberd is in the Castle Grayskull weapons rack, which was true in the vintage line, too, as Scare Glow's weapon was a recast of the older accessory from the vintage Castle Grayskull. 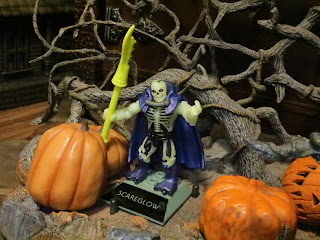