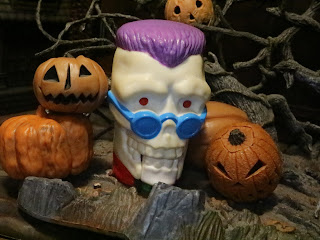 Back in late July and early August everyone was talking about the Fear Street movies on Netflix. I'd never read any book in R.L. Stine's Fear Street series but I've long been a fan of Goosebumps. I got into Goosebumps sometime in the summer of 1994 right, right before 5th grade. I've always loved spooky stuff and Halloween as a kid and Goosebumps was one of my first real forays into horror fiction. Shortly after I got into the series Goosebumps really kicked into high gear with calendars, merchandising, and multiple books besides the main series, one of those being Tales to Give you GooseBumps which featured a cover with Curly the Skeleton on the front. Curly was the Goosebumps mascot for years and today I'm checking out a toy of him from the 1996 Taco Bell promotion. The toy is called the SkullMobile and it's essentially Curly's skull with a wheel on the bottom. Turn the wheel and his eyes bug in and out while his jaw goes up and down. It's something that wouldn't look out of place with Kenner's The Real Ghostbusters toys. I remember getting Curly on a weekend trip to Nashville, Tennessee only a few months before we moved there (I lived right outside of Nashville from 1996 until 2007 and I consider it my true hometown). That weekend was memorable because we went to Opryland for the Halloween festivities, I went in my first real haunted house there (Quarantine which terrified me but also really got me intrigued by zombies), and I found the deluxe Star Wars figures like Han Solo with giant smuggler's backpack. Crazy, huh? Also, I think our car got stolen or something if I remember correctly. Anyways, let's check out Curly's SkullMobile after the break before I spend too long reminiscing... 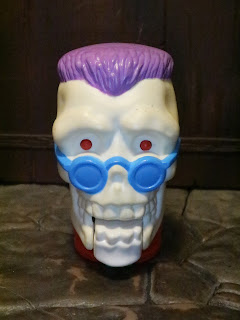 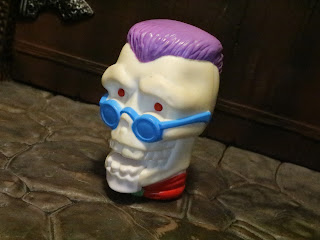 The Positives:
* The SkullMobile is basically Curly's skull with a friction wheel on the bottom. When you roll him his jaw moves up and down and his eyes bug out like a Fright Features Ghostbuster. He's a simple toy made for a kids meal to promote a series of books. What did you expect? He is fun, though. I was never the biggest Curly fan (he was made up for marketing and wasn't part of any of the books prior to his role in marketing the series) but he's so bizarre that now I find him charming. 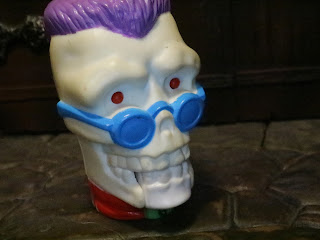 * You can tell that Curly was stored in my parents' garage for years as his skull has started to yellow on the sides. That's on me. Otherwise, this is a very simply painted toy but the bright colors are fun and help him stand out from your garden variety rolling skulls. That purple hair is so 1990s and makes him look like the skeleton of Egon Spengler from Extreme Ghostbusters. 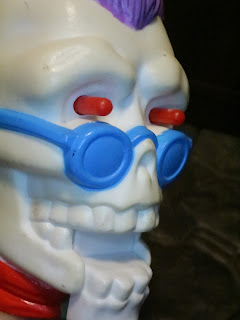 * This toy's play feature is a simple friction wheel that makes the jaw move up and down and the eyes bug in and out. Again, it really does feel like something you might have seen in Kenner's The Real Ghostbusters toyline. I think something broke in mine while I was messing around with it as the jaw now only moves when you pull Curly backwards while the eyes only pop out when you push him forwards. 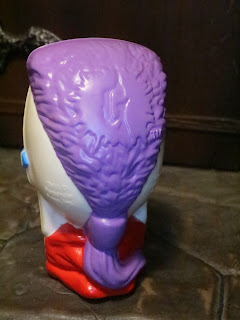 * Here's a better shot of Curly's fantastic hair. He even has the Goosebumps "G" splat logo shaved into the back of his hair. Remember when that was a thing? 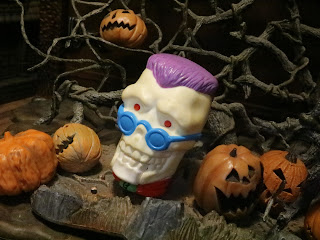 Curly's SkullMobile isn't a great toy or anything but it fits this year's theme, reminds me of Goosebumps, and it's a skull with some truly out there purple hair. I loved Goosebumps (still do for the most part, and both of the movies are pretty good) but I wasn't too into the other stuff that came out around the same time as the merchandised items. Still, it was kind of a big deal that Taco Bell had a Goosebumps kids meal. I bet no one thought we'd be discussing this Good and a 1/2 little taco trinket 25 years later did they?
This is the first toy of Curly I've reviewed.
Posted by Barbecue17 at 10/05/2021