31 Days of Toy Terror: Skeletober! King Hell from The Worst by Super7 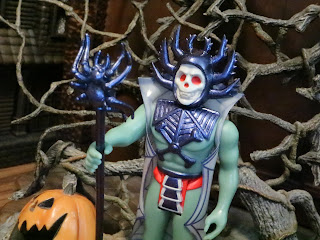 It's time for another entry of Skeletober and this time it's the second figure released in series 3 of Super7's The Worst line: King Hell, the DemonArachnid Emperor! I reviewed Killer Bat earlier this month as a special non-skeleton themed review but King Hell is absolutely on theme this year. He's a skeleton, he's all into spiders, he looks like Skeletor's twin brother; what's not to love about this guy? He's a super cool figure and it's time to get spooky and check him out. More terror after the break... 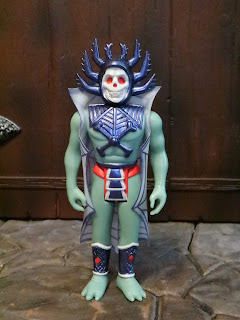 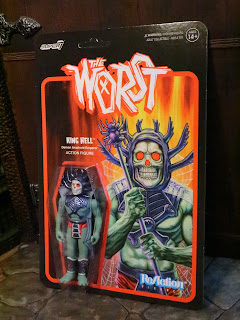 The Packaging:
* I've long loved the Ed Repka artwork on The Worst and King Hell is another is at another level. The packaging is so fun and colorful and it really adds a lot to the overall appeal of the line I open mine but keep the cards because they're so darn slick. This guy needs to be a Super7 Ultimates figure stat as he's just so darn amazing! 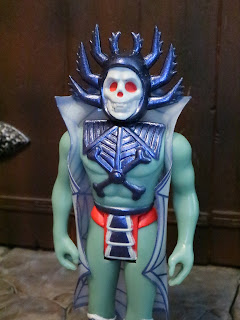 The Positives:
* The character design on The Worst is always amazing and King Hell is another excellent addition to this team of villains. He's clearly a MOTU fan as he's wearing little clothing and is just covered by armored bits. The metallic blue of his chest armor, which combines skeletons and a spiderweb motif, is awesome. The detail on his shin guards and his codpiece is also pretty cool. This guy looks like he doesn't give two flips about what people think about the way he dressed. He things he looks good and that's enough for him. 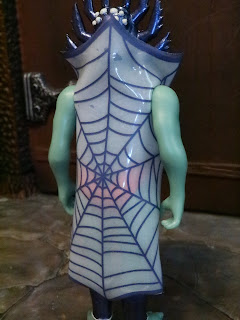 * King Hell's cape is a spider web inspired vinyl piece that you could remove if you wanted to but I'd advise against. Vinyl capes can be fragile! This one looks really cool, though, and according to the package art it's just supposed to be a spiderweb rather than a spiderweb inspired cape. 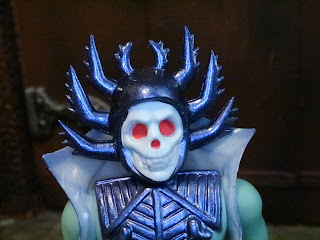 * I know that skulls pretty much look alike but doesn't this guy look like he could have been one of the greatest Skeletor variants of all time? He's got white...bone, red eyes, and a headdress that almost rivals Hela. 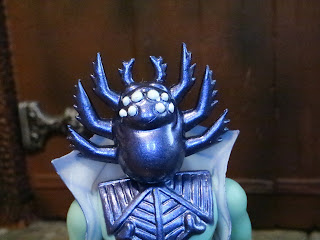 * I'm not sure if this is an intentional feature or just the back of King Hell's helmet but if you spin his head he looks like a giant spider. Perhaps this is his true form? 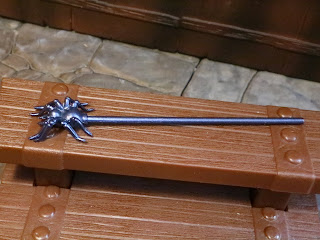 * King Hell comes with a long staff with a purple spider as the headpiece. It's cast in metallic purple plastic and can fit in either of his hands. 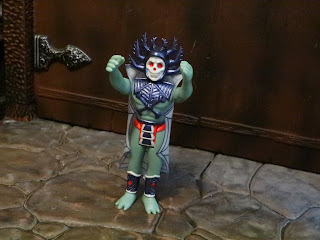 * If you've ever picked up a retro inspired figure like this, you know what to expect: 5 points of articulation and all swivel joints. He feels quite well made and sturdy and definitely of a better quality than some of the earlier ReAction figures that Funko put out. Super7 has been very consistent in the quality of their ReAction lines and they're always durable and well made. 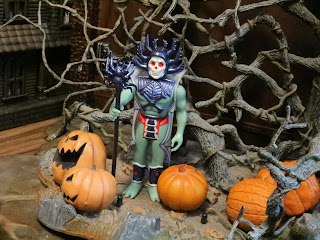 King Hell is another excellent addition to The Worst and earns a Great and a 1/2 rating from me. He has an excellent design and the retro design is a huge part of the charm. His armor, the spiderweb cape, and his staff really add to his coolness. I'm really excited for Super7's upcoming The Worst Ultimates and I can see it as a line I'll go all in on. I hope they start releasing more than just two figures at a time as currently we've got 14 members of The Worst with four more on the way. This guy was a perfect treat for Skeletober and I'm excited to see who else Super7 has in store for the rest of series 3.