31 Days of Toy Terror: Skeletober! Scareglow from Masterverse/ Masters of the Universe: Revelation by Mattel 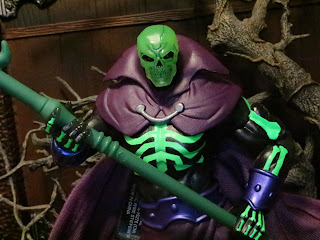 It's Halloween and the 31st Day of 31 Days of Toy Terror: Skeletober and this year I've picked someone ultra spooky and incredibly cool to end the month: The Mattel Creations exclusive Scareglow from Masterverse! Based on his appearance in the first half of the Masters of the Universe: Revelation animated series, this exclusive figure was put up for pre-sale on Mattel Creations on July 22nd, the day before the show premiered on Netflix. It was a quick sellout but I got mine and he arrived in the mail last month. I've been holding on to him for over a month just to save him as a special treat for Halloween! Oddly, the packaging calls him Scareglow but the official name has always been Scare Glow (with a space) so that's how I'm referring to him throughout the review. Voiced by horror star Tony Todd, Scare Glow appearing in his first animated appearance was a huge deal for most MOTU fans and I believe most would agree it was excellent! The episode "Land of the Dead" was fantastic and Scare Glow was an intimidating presence. I think we're going to have a great Halloween checking this guy out. Say "Trick or Treat" and join me after the break.... 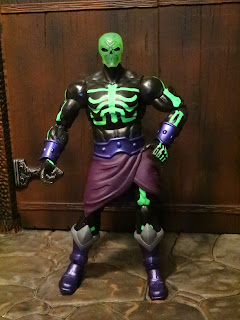 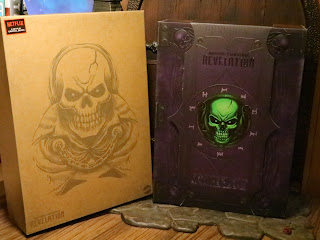 * When Mattel does a Masters of the Universe exclusive you almost always get some phenomenal packaging and Scare Glow is definitely a treat rather than a trick. He comes in a protective brown mailer with some excellent art which houses his true packaging that looks like some ancient and evil tome. It has a removable strap down the middle to reveal a box that looks like the caves of Subternia. More on that in a moment! 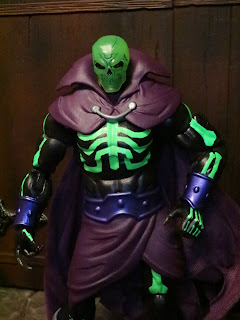 The Positives:
* There is a standard Scare Glow figure coming out in Masterverse series 3 but thus far I don't believe we've seen any images of him. This guy is pretty amazing, though, and he'll be hard to top. This time Scare Glow is cast in black plastic with his bones painted on in neon green. He's wearing a superb "outfit" with a purple waist robe and his traditional purple cape with an elaborate mantle. I love the metallic paint used for his boots, wrist guards, and belt, and the green of his bones just jumps out! There's no way this guy is just going to fade into the background of your toy shelf! 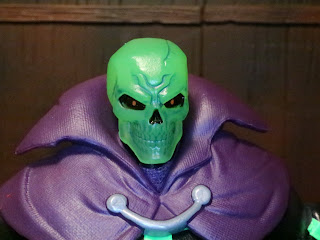 * The headsculpt is excellent and oh so evil! I love the cracks and the lines used to give Scare Glow expression. He really does look truly evil, doesn't he? This is one of the most menacing looking toys I've ever seen. It's a fantastic sculpt! 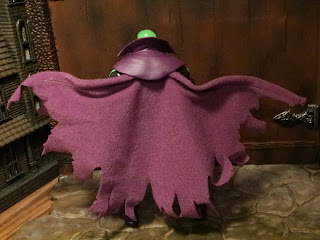 * Both Scare Glow's cape and mantle are removable. The mantle is plastic while the cape is fabric. It's tattered and worn with frayed strips across the bottom and it has wires across the top to allow you to pose it. That's a really fun feature and it makes Scare Glow a very dynamic figure to pose and display. 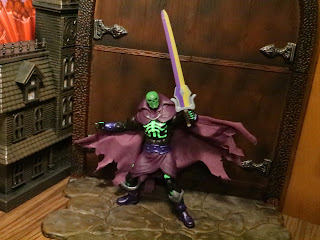 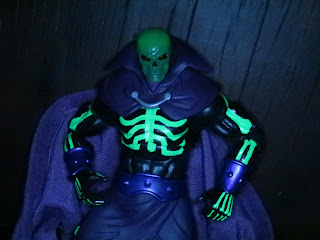 * Traditionally most Scare Glow toys have been molded in glow in the dark plastic with the bones painted on. This Scare Glow is different and the neon green bones sort of have a black light effect. He does glow a bit, though, and looks pretty cool. His packaging has some functioning lights that bring out his glow but I'll get to those shortly... 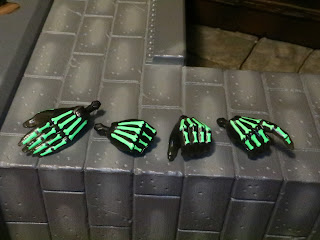 * Scare Glow comes with four interchangeable hands complete with lots of neon green bones. He's got an open palmed left hand and a gripping left hand and a right hand fist and a pointing right hand. They swap pretty easily and do give a nice variety of posing options. 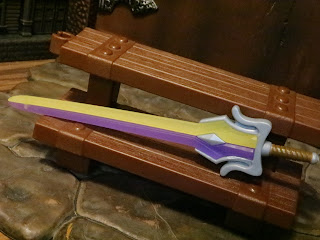 * Scare Glow comes with the Power Sword with both halves highlighted. The light half is yellow while the dark half is purple. It's a really cool accessory that's a key plot point in the episode and in the prequel comic book and it hearkens back to the idea of the Power Sword in the original vintage toyline and comics. The blades are translucent and the handle gets a paint application, too. 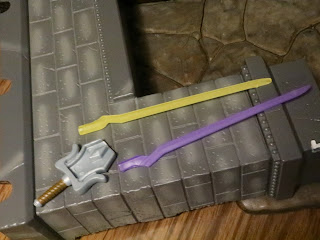 * The Power Sword also splits. You can remove the light and dark halves to recreate the quest to assemble the sword! How cool! 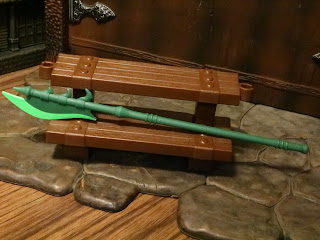 * Scare Glow also comes with his traditional scythe. It's green with a glowing edge of the blade and it looks suitably terrifying for the ruler of Subternia. 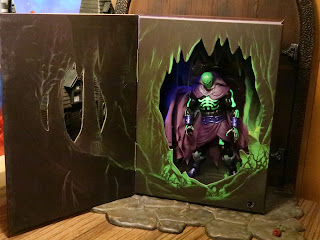 * So.. remember the packaging I mentioned above? Once you remove the "strap" holding it shut you can see through the caverns of Subternia to gaze upon Scare Glow. Open the first flap and you'll get a better view of this evil ghost. Open the second flap and you can remove him from the package. The packaging is fairly collector friendly (you'll just have to remove a couple plastic ties) and really adds a lot to the overall piece. Notice that button in the bottom right corner... 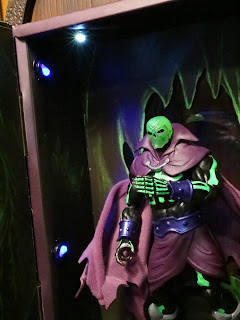 * When you open the flap the lights on the side flicker and flash. The two lights on the sides are black lights to show off Scare Glow's neon green bones while the top is a standard flickering LED to simulate lightning. That's some world class presentation that convinces me this was intended to be an SDCC exclusive at one point. 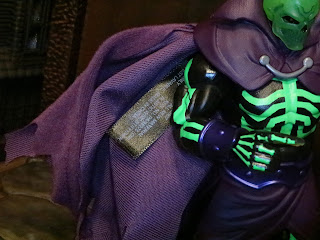 The Negatives:
* I do have a negative. Hey, there's always gotta be at least one pack of raisins in your Trick 'r Treat pail, right? Scare Glow's cape has a massive tag. massive. Why? Has anyone else ever seen anything like this on a soft goods action figure accessory? Oh Mattel. Bless your heart. Remember when they said they couldn't do chase variants as it counted as an interstate lottery? Bless them. 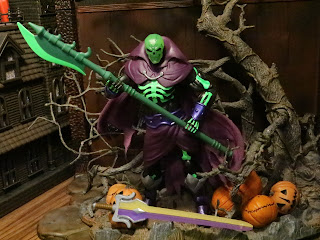 Scare Glow was sold at a premium price but with his excellent accessories and his really impressive packaging he's definitely worth it. A couple more hands would have been nice but it's tough to complain too much about what we're getting here. He's a Great and a 1/2 figure and an impressive addition to Masterverse. Mattel really seems to have big plans for this line and so far they have not disappointed. Congratulations, Scare Glow! You're a 31 Days of Toy Terror icon now alongside other illustrious horror icons like Sam, Michael Myers, Sadako Yamamura, Jack Skellington, and David S. Pumpkins.