Action Figure Review: Evil-Lyn (200X) from Masters of the Universe Origins by Mattel 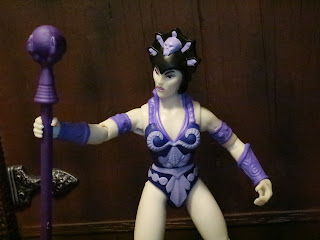 Earlier this month I got my hands on the fifth series of Masters of the Universe Origins figures and I suppose it's about time to start reviewing them. Let's start out with Evil-Lyn, a figure who is mostly a repaint of last year's figure designed to look more like her counterpart from the 200x toyline. With so many characters still yet to be made I'm sure Mattel is releasing so many repaints in the line right now simply to control costs. Every time there is a new Masters of the Universe line I always wonder how deep the line will go, especially when it comes to characters with unique torsos and builds. We might get a 200x repaint of Evil-Lyn but what about Sssqueeze or Leech or Rio-Blast? Mattel has shown they're willing to do deluxe figures in this line so hopefully that clears the way for characters like Dragstor, Rotar, or Rio Blast. In the meantime Mattel is giving this line it's own blend of characters and variants and Evil-Lyn's appearance from the 200x toyline and Mike Young Productions animated series is a popular look for the character. In Masters of the Universe Classics the explanation for Evil-Lyn's gray skin as opposed to her  yellow skin is that she has been depowered. This variant doesn't really get a story or anything so you'll have to make up your own. Let's check out the 200x inspired Origins Evil-Lyn after the break... 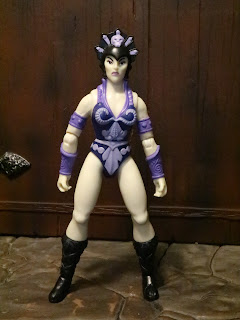 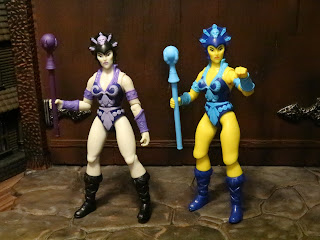 Comparison:
* The new 200x inspired Evil-Lyn is on the left while last year's vintage inspired Evil-Lyn is on the right. What's different? For the most part the 200x version is just a repaint but she does have different knees than the previous female figures. These knees are a big improvement with more definition of the kneecap. They look much better! 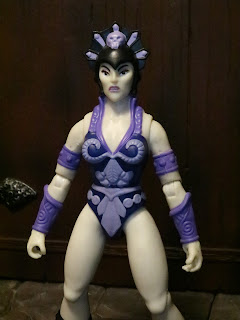 The Positives:
* This homage to the 200x Evil-Lyn doesn't actually have any different sculpted details but simply has pale gray skin and a  purple and black color scheme. It's not a great likeness to Evil-Lyn's more sophisticated outfit in the 200x line but it is a nice looking figure. The details on Evil-Lyn's outfit and her bracers are very sharp with clean paint applications. She does stand out from the previous figure even though she's not as brightly colored. 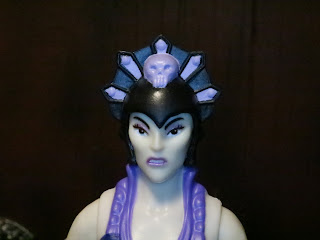 * The headsculpt is the same as the previous release so I'll echo what I said there: While in recent years Evil-Lyn has been portrayed as more classically attractive, the vintage figure definitely seemed to portray her with very severe features, not unlike a Disney villain. That's more what we've got here and I really like it. Her headpiece is nicely rendered here and the face has a great scowl on it. She has an angular nose, very severe cheekbones, and now purple eyeshadow to match her outfit. 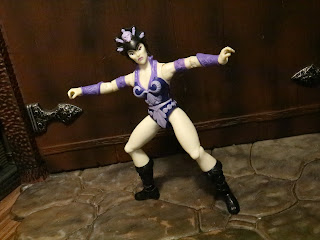 * The articulation used on the female MOTU Origins body is quite good, maybe even with smoother articulation than the male body. I thought I've previously had issues with the look of the knee joints but the new design is much more visually appealing.
*These figures are modular and the limbs, torso, and head can be easily separated to make your own lazy boy customs! 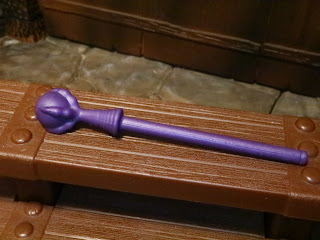 * Evil-Lyn comes with her magic wand but this time it's purple. She's all about color coordinating her outfit. 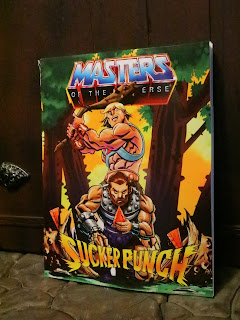 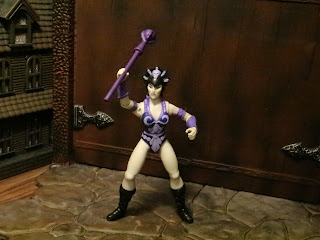 It would have been nice if Mattel had further leaned into the 200x design with a different headsculpt, a cape, or a new wand but this still is a pretty nice figure. If you don't like it there's no need to purchase it since it's not like it's part of a build-a-figure set or anything. It is cool, though, and I'm glad to see Mattel acknowledge the 200x era as it's one of my favorites. This is a Great figure and while getting another Evil-Lyn isn't as exciting as getting a character that's new to this line she's still very nicely done.
If you're a fan of Evil-Lyn I've also reviewed the Masters of the Universe Classics Evil-Lyn, the M.U.S.C.L.E. Evil-Lyn from the Masters of the Universe green boxed set, Tweeterhead's Evil-Lyn bust, the ReAction Evil-Lyn, Super7's neo-vintage Evil-Lyn, the Monogram International Evil-Lyn bag clip, the standard Evil-Lyn POP! + Pez dispenser and the Evil-Lyn (Metallic) POP! + Pez Dispenser, the Rock Candy Evil-Lyn, the Funko POP! Evil-Lyn #86, the Eternia Minis Evil-Lyn, the MOTU Origins Evil-Lyn, the Mega Construx Evil-Lyn and Evil-Lyn (series 2) and Mega Construx Heroes Evil-Lyn.
For more Masters of the Universe Origins reviews check out the following:
Battle Armor He-Man
Battle Armor Skeletor
Battle Cat
Battlefield Warriors
Beast Man
"Buzz Saw" Hordak
Castle Grayskull
Clamp Champ
Evil-Lyn
He-Man
He-Man and Prince Adam 2-Pack
Hordak
Land Shark
Lords of Power
Man-At-Arms
Man-E-Faces
Mer-Man
Ninjor
Orko
Panthor
Panthor (Flocked)
Prince Adam & Sky Sled
Ram Man
Rise of Evil
Roboto
Scare Glow
She-Ra
She-Ra (PowerCon Exclusive)
Skeletor
Stratos
Teela
Trap Jaw
Tri-Klops
Wind Raider
Zodac
Posted by Barbecue17 at 10/27/2021