Action Figure Review: Faker from Masterverse/ Masters of the Universe: Revelation by Mattel 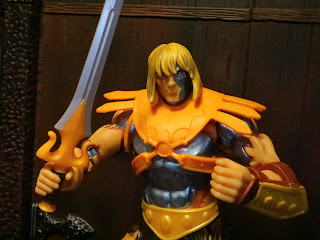 He looks like He-Man, but he's not....
He's really just Skeletor's evil robot!
Faker played a significant part in the first episode of Masters of the Universe: Revelation and Mattel has delivered him as a deluxe release that is currently exclusive to Target (though I believe he'll have wider release next year). The Masterverse line has been really good so far and Faker is another fantastic figure that shows how cool the deluxe releases in this series can be. While the toy version of Faker is famously a blue repaint of He-Man, the Filmation version of the character simply looked like He-Man with a robotic voice and glowing eyes. MOTU: Revelation split the difference and made Faker a bluish robot covered by realistic looking skin, delivering a toy that does feel like it's offering up something quite new. Faker definitely is not just a repaint of the standard Masterverse He-Man! Let's check him out after the break... 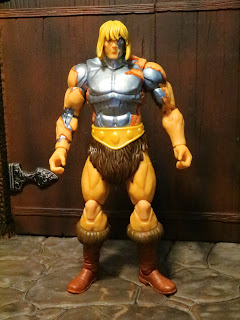 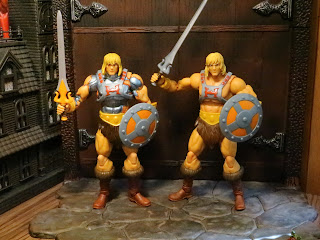 * Faker is on the left while the Masterverse He-Man is on the right. What's the same? They have the same lower bodies, hands, harnesses, shields, and swords (although the swords are different colors). Everything above the waist, for the most part, is different. The robotic elements are sculpted and not just painted elements. 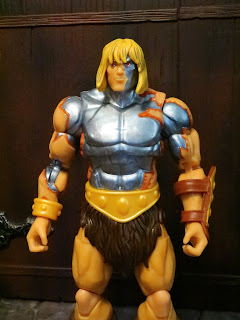 * At the beginning of his appearance in Revelation Faker looks just like He-Man. He captures the Sorceress and she uses her magic to "burn off" most of his skin which reveals the robot underneath. That's the look for Faker Mattel has given us here as you can see Faker's true robotic body covered by the remaining strips of synthetic or magical flesh. It's actually sculpted and looks pretty good. The metal body is a mixture of blue and silver bits. It's quite accurate to the look of the cartoon as well. The lower body is the same and he's sporting the same belt and furry trunks as He-Man, though with a slightly darker paint wash on the trunks. 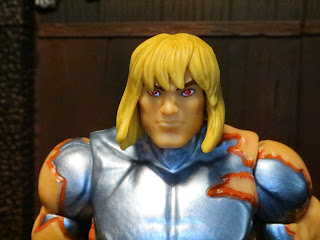 * Faker comes with three heads that you can swap out at will. First up is a standard He-Man head. It's not the same as the head of the standard released He-Man figure as the hair is different, the face sculpt is different and less heroic looking, and he's sporting red eyes. Slap this on the standard He-Man body and you've got your disguised Faker figure from before the Sorceress exposes him. 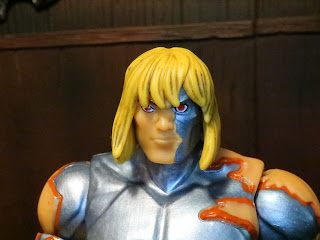 * The second headsculpt shows half of Faker's He-Man disguise and half of his true, robotic self. This is the T-800 styled look that first appeared on the Faker head included with Intergalactic Skeletor in Masters of the Universe Classics and which has become a pretty popular look for the character. It's well done and looks quite good. Like on the body the torn flesh line is a sculpted elements and not just paint which is a big plus. 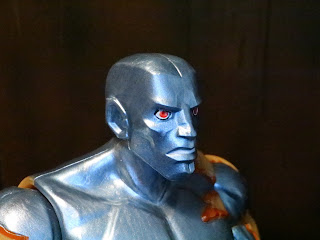 * The third and final head is the fully revealed Faker head. This is an unusual look that reminds me of an anime version of the Silver Surfer or perhaps Steel from DC Comics. It does work as Faker, though. It definitely seems like it could be the base body for Faker to be transformed into a wider variety of characters. 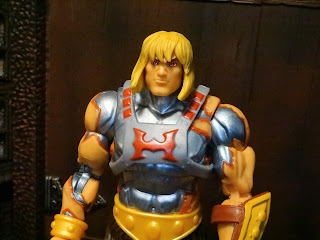 * Faker comes with two harnesses, the first of which is the standard He-Man harness. This is actually what Faker actually wears in the show so it's probably the most accurate look for him. Of course, if you want a more classic Faker Mattel has you covered... 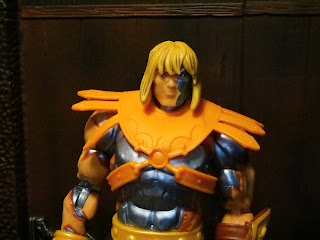 * The second Harness is Skeletor's harness now cast in orange. It's definitely what the classic Faker depictions look like and I imagine most collectors will prefer this look. 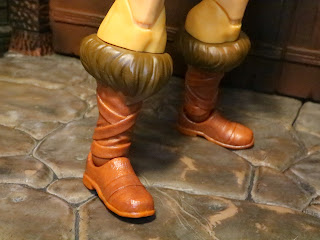 * Faker's boots are just like He-Man's classic boots which are nicely sculpted here with lots of detailed fur and leather wrappings and even some dry brushing effects to bring out some detail. 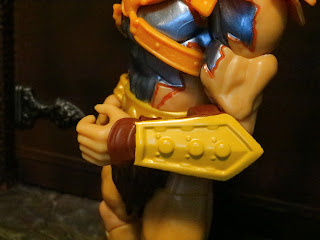 * The bracer on Faker's left wrist and the cuff on his right wrist not only look cool but are also separate, removable pieces. You can pop off Faker's hands and they'll slide right off. 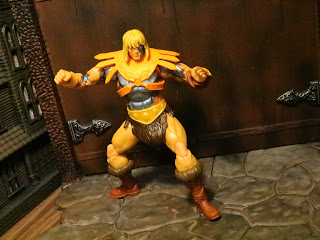 * The articulation is overall really good here. In fact, I do believe these most well articulated MOTU figures ever made. Faker has an abundance of joints and can achieve some excellent poses. This is a really nice, very high quality action figure. 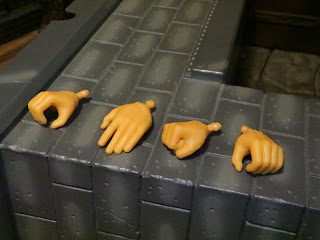 * Faker comes with two pairs of interchangeable hands. There is a pair of standard grips, a right handed fist, and an open left hand which helps with using his shield. They swap off easily and the pegs all feel nice and sturdy. 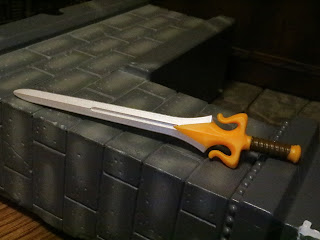 * Faker has the same Power Sword as He-Man but here it's given an orange hilt, just like the vintage toy. It does look cool and it's nice to get the accessory even though it's not from the show. 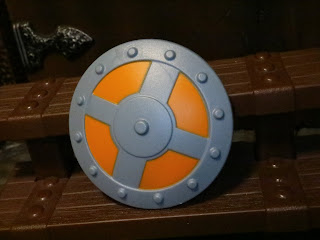 * Faker also comes with He-Man's shield. It's an awesome shield that's very traditional looking with super functional straps that hold the shield over Faker's left bracer. I really like how it works and it looks great on the figure. 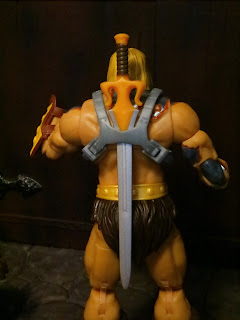 *  There is a groove in the back of the He-Man armor designed to hold the Power Sword in place. I'm sure it wasn't really necessary but it's there and it works well to give Faker a place to stow away the sword when he needs his hands free. 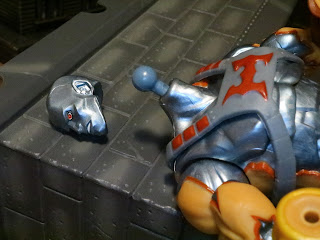 * The first two heads swap easily but the fully robotic head takes some real effort to get on the body. Be careful! 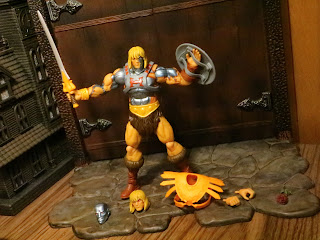 I'm really pleased with Faker. He could have easily just been a He-Man repaint (and I'd probably be fine with that) but this guy really stands on his own. As a deluxe Masterverse release the three heads, two harnesses, and multiple other accessories really do make this guy feel worth the extra sawbuck. He's an Epic figure with lots of options for customizing the figure you want. I'm really excited that Mattel is releasing lots of deluxe figures in this line and I'm excited for more future releases to come.

Are you a fan of the man/ machine known as Faker? Then check out my other Faker reviews:  The Mondo exclusive Faker, the M.U.S.C.L.E. Faker from the Series 3 Pack C, the Ultimates He-Man (which came with a Filmation Faker head), the Eternia Minis Faker, the Faker figural bag clip, the Mega Construx Faker, Faker from the Battle for Eternia Collection and Faker from Battle Bones, the Masters of the WWE Universe Faker John Cena, the ReAction Faker and Leo Faker, the Super7 Faker mask, the Vinyl SODA Faker, and the VYNL Faker.
For more Masterverse reviews check out the following:
Battle Cat
Evil-Lyn
He-Man
Moss Man
Skelegod
Skeletor