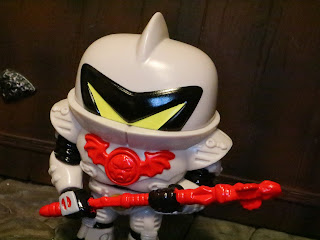 Do any of you POP! collectors army build POP! vinyls? Just curious because Funko has given us the first Masters of the Universe army builder in POP! vinyl format: A Horde Trooper! The Horde Troopers have been depicted a few different ways over the years but considering that this guy is based straight off of the vintage toy he's definitely a robotic warrior, just one in the legions serving Hordak and the Horde Empire. He's a bulky, intimidating brute for your POP! collection. Ready to check this guy out? Then join me after the break... 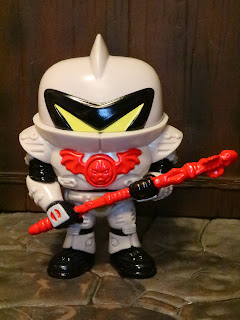 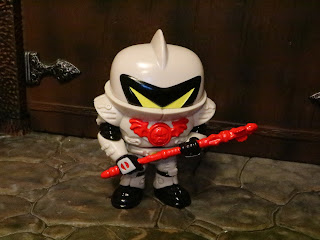 * Unlike most POP! vinyls the Horde Trooper doesn't have a swivel head. I suspect it's do to the unusual way his head connects to his armor and Funko just didn't want to interrupt the look and flow of the figure. That being said he's in a slightly neutral but still pretty cool pose: Vintage staff held at the ready while he's standing at guard. He'd look awesome flanking Hordak, that is if you're lucky enough to own Hordak (I sadly don't- he's pretty expensive!). 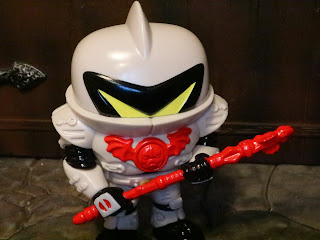 * The sculpt on the Horde Trooper is one of the best POP! vinyl sculpts I've ever seen. He doesn't even look like a POP! vinyl as much as just a great minifigure of a Horde Trooper. The colors are spot on and the little details like the pronounced Horde logo on his chest look fantastic. The Horde logo even looks like the button of the vintage toy that, when pressed, would cause the front and rear armor to fall apart revealing the robotic inner workings of the trooper. 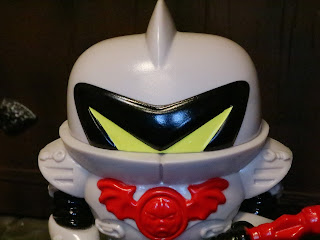 * These guys have some really cool helmets and Funko captured them well. They're a great mix of technology and old school medieval inspired fantasy. 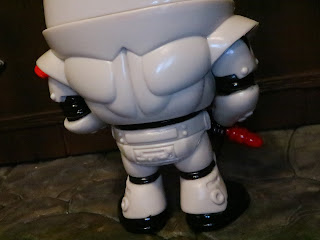 * The armor is quite intricate and has all kinds of little details such as these tech panels on the rear of the figure. Even the shoulders look "articulated" to show off where the Horde Trooper would have joints. 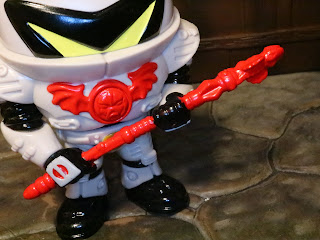 * The Horde Troopers have used many weapons over the years but this guy is toting the staff that the vintage toy came with. It's a nightmare of techno design designed to but a hurting on the peasants of Etheria. We need more members of the Great Rebellion to stop these fools immediately! 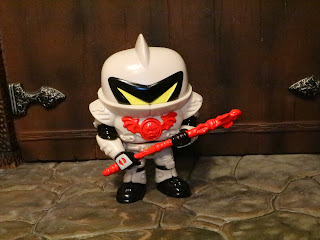 The Horde Trooper is another Great and a 1/2 POP! vinyl and an impressive sculpt of the Horde's terrible troopers. He's solid, menacing, and a great presence to help fill the ever growing collection of Horde POP! figures. I love how bright his reds are! I sadly do not have my childhood Horde Trooper anymore and while I hope to get another vintage one someday it's always fun to get a new rendition of the character. I remember getting him on a Christmas morning when I was fairly young and loved how odd he looked and how he broke apart. Picking up this guy brings that memory to mind which is a pretty welcome thing.