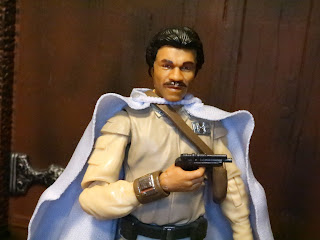 It's been really tough to find Star Wars: The Black Series figures this year and only in the past few weeks have I started finding traces of the newest series. The first figure I managed to get my hands on is General Lando Calrissian. This is my favorite look for Lando from the Original Trilogy (it's my favorite overall, too) and I'm thrilled that we finally got it. Hasbro released Lando in his classic ESB outfit in 2017 and in his Skiff Guard disguise in 2018 so now all we need is Lando wearing Han's clothes from the end of ESB to complete all of his outfits from the Original Trilogy. Lando Calrissian gets promoted to the rank of general thanks to a little maneuver at the Battle of Taanab which gives him another suave outfit to perfect with the addition of a cape. Let's take a look at General Lando Calrissian after the break... 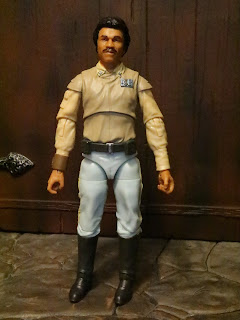 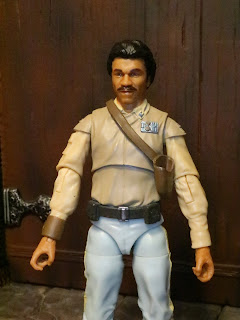 The Positives:
* Lando has one of the best outfits in the Original Trilogy here: A sleek looking Rebel Alliance tunic over a long sleeved shirt, blue pants with a yellow stripe, and a shoulder holster. It looks excellent and Hasbro sculpted everything really well with plenty of paint applications. 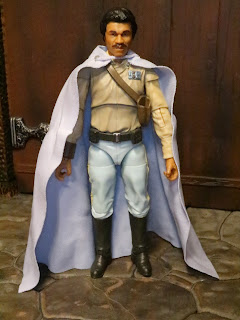 * To really sell the outfit, though, you have to add on this incredibly spiffy cape. This thing looks amazing, doesn't it? I'm so glad they went with actual soft goods here as it just hands so well and looks more impressive. The clasp around Lando's next is plastic and sculpted so it looks pretty accurate to the source material. 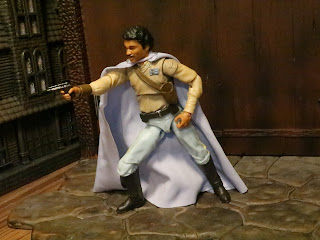 * The articulation is excellent. It's smooth, durable, and has all the right moves; kind of like Lando! He's a fun figure to mess around with and looks great whether just standing around or in an action pose with his blaster pistol at the ready. 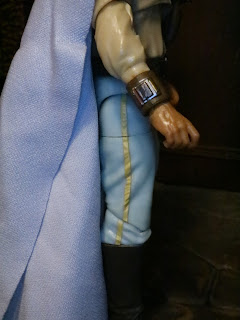 * Hasbro almost always captures the small details on their Star Wars: The Black Series figures and here I'm showing off the stripes on Lando's paints and the cool communicator device on his right wrist. 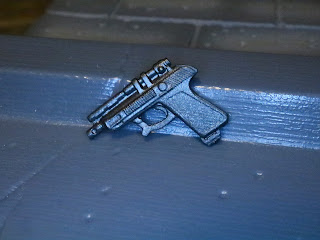 * Lando's blaster pistol seems to be just referred to as a "Fleet Officer Blaster Pistol" rather than having a specific name. Can anyone find an actual in-universe designation? The prop is based on an H&K P9S and it's a really cool looking compact blaster pistol. Hasbro really detailed this one nicely. 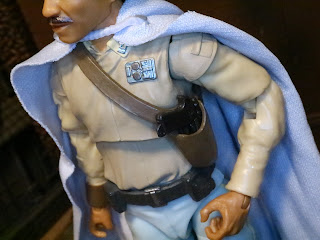 * When Lando's not using his blaster he can pop it into is shoulder holster. The shoulder holster is removable if you work it over Lando's left arm and head if you want to take it off for some reason. 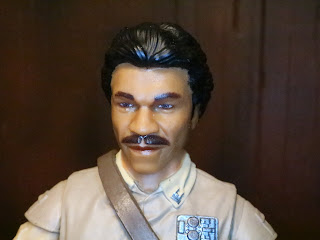 * Let's talk about the portrait. On the plus side it's a great likeness of Billy Dee Williams. Hasbro has been really nailing their Star Wars sculpts lately and the face printing makes it perfect.
The Negatives:
* I do have a negative, though: Why is Lando not smiling? Lando's charm is a defining part of his character and I really wish Hasbro had given him a smiling headsculpt or an alternate headsculpt with a grin. Or shouting with joy as he's escaping the Death Star II. 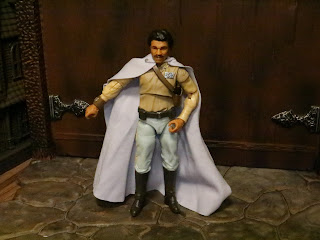 Lately Hasbro has jumped the prices of the Black Series figures up but we're not getting any extras like alternate headsculpts or extra gesturing hands. General Lando Calrissian is a Good and a 1/2 figure but it would have been awesome to have had an alternate portrait or a smiling expression to really show off Lando's character. There's nothing wrong with the figure but the expression just doesn't scream Lando to me and, since this is my favorite look for Lando Calrissian in the Original Trilogy, that's a bit of a disappointment.