Minifigure Review: Roboto from Masters of the Universe by Mega Construx 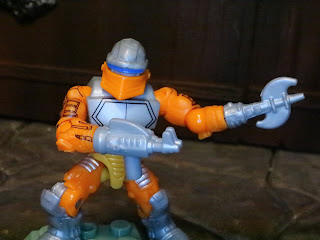 I reviewed Man-E-Faces from the most recent series of Masters of the Universe Mega Construx figures a couple days ago and today I'm checking out the other Heroic Warrior in this set: Roboto! Interestingly, this version of Roboto isn't based on the standard toy version most of us had as kids but instead is based on the minicomic colors from his appearance in "The Battle of Roboto." It's entirely possible that the Mega Construx team has a classic colors Roboto planned for some point in the future as otherwise it seems strange to start with this version. On the other hand it is kind of cool that this is the first time we've gotten Roboto in this color scheme. Let's take a look at this very cool version of Roboto after the break... 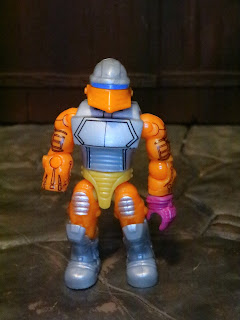 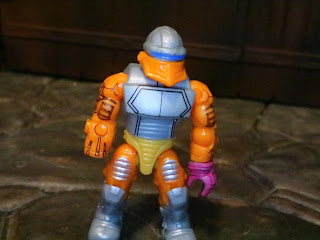 * Roboto doesn't have a clear torso like most versions of the character that have come before him. Instead, he has a solid silver looking chest which does match the comic art quite well other than the lack of his visible heart. To help sell the robot effect and add detail there are some really cool dark lines and details printed on Roboto's torso and arms. He looks really impressive, particularly when you consider he's so small! 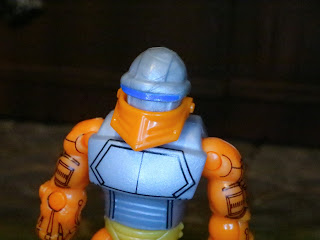 * Roboto's head is also a solid replication of the vintage toy but with an orange beak-like jaw instead of red. The "jaw" is hinged and moves up and down. 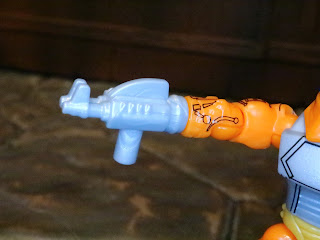 * To arm him against the Evil Warriors Roboto comes with three weapons which can fit on his right arm. Actually, you can pop out his right hand and he can have weapons on either arm. First up is his double-barreled laser blaster. This is useful for when Roboto needs to defeat foes from a distance or to reinforce his street cred. 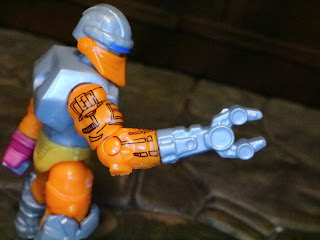 * Next up is his claw. It's my least favorite of Roboto's extra arms but it's still pretty cool. It honestly looks really good in this scale. The detail on the little bits and bobs on the accessory is fantastic. 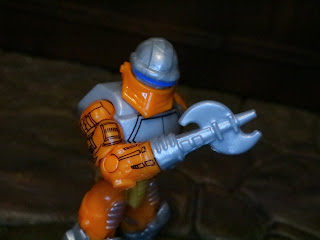 * Last up is Roboto's super cool double bladed axe. This guy is ready to carve up some Shadow Beasts for sure! 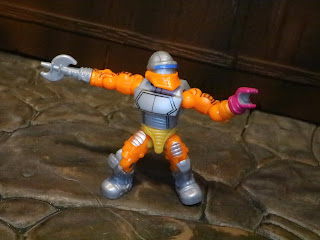 * Like the rest of the figures in this line Roboto is well articulated and ready for battle. These really are some of the nicest minifigures out there and they're incredibly fun. If you haven't picked up on yet and you're either a MOTU fan or a minifigure fan, you really need to. What's more fun than a tiny articulated robot? 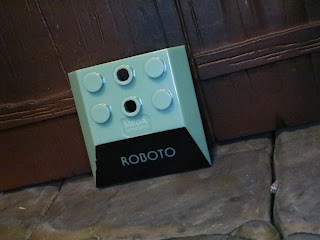 * Roboto also comes with a stand. It's a simple display stand with his name on it. This is a great little stand for displaying the figure, even if you want to put him in more extreme poses. 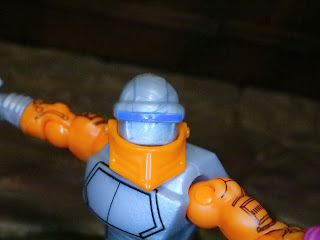 * The hinged bill/ visor/ jaw is really cool but I wish that the space behind it had gotten the black paint application that pretty much every other Roboto I can think of has had. it would have looked so much better when posing the jaw. 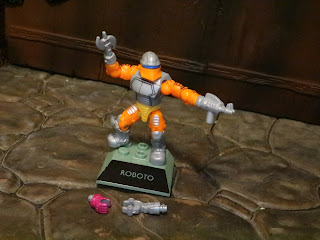 Roboto is a Great minifigure! I love his colors (even though they're not what you'd expect) and the way the details are printed on his arms and torso does look very neat and clean. He comes with a nice assortment of goodies to use on both of his hands, too, so that's extra fun. Roboto is really well made and another fun addition to this growing line. I'm always excited when Mega Construx puts new releases, especially when we're getting new characters. Do you think we'll see a classic colors Roboto in the future? I wouldn't bet against it!

If you're looking for more of Roboto I've also reviewed the MOTU Origins Roboto, M.U.S.C.L.E. Roboto from Series 3 Pack B, the Super7 Filmation inspired Roboto, and the 200x Roboto head from the MOTUC Heads of Eternia set.