31 Days of Toy Terror- Skeletober: Skeletor from Masters of the Universe by Mattel 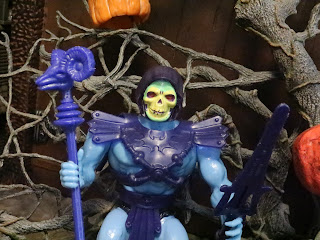 Welcome to 2021's 31 Days of Toy Terror- Skeletober! Over the previous eight years of 31 Days of Toy Terror I've had years with various themes including vintage toys and movie based toys but this year we're going all in on skeletons. Skeletober just sounded too darn awesome, y'know? While we're going to have a variety of spooky skeleton based toys this year just go in knowing that this year's master of scare-emonies is Skeletor himself! Skeletor is probably one of the most popular horror themed toys of all time as so many kids have had him in their toy boxes and with his eerie, skeletal visage he's absolutely a horror toy. Today I'm starting things off with a very special review of my original vintage Skeletor action figure from childhood! Skeletor was part of the original Masters of the Universe lineup from 1982 and this is the original figure. He's a horror icon, a toy icon, and the Evil Lord of Destruction; could there be a more fitting toy to kick things off this year? Let's get 31 Days of Toy Terror- Skeletober rolling with a look at Skeletor after the break... 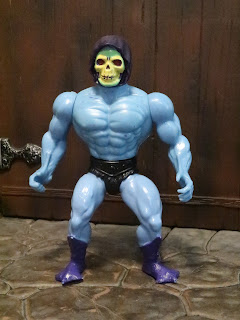 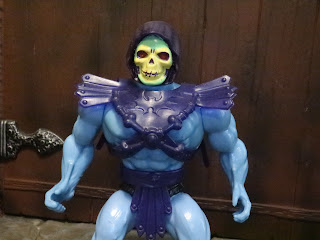 * Skeletor is as iconic as He-Man and possibly even more so! While he shares the built, muscular body of most of the early MOTU figures he's also sporting those wicked arms with fins on the bottom and some truly metal armor. I love the Roman styled shoulder pads, the bone-like design in the middle, and the bat emblem on his chest armor. He's straight up evil and there's no way you could misidentify him as a hero. 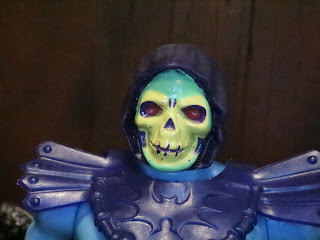 * Skeletor's skeletal visage was designed by Mark Taylor, a true master of the universe, and was based on Day of the Dead calavera designs and the mummified corpse of outlaw Elmer McCurdy which was displayed in a California fun house for years. Skeletor's face is a grotesque mixture of a skull but it's more... alive? The mixture of yellow and green definitely adds to the look while the deep seated eye sockets with a touch of red deep inside add to the menace. 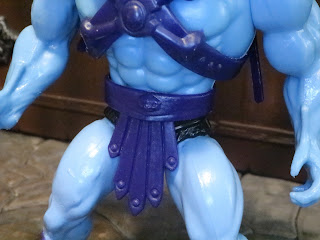 * Skeletor is well dressed (if you can call a half naked skull guy dressed) and is also sporting a removable belt that continues the Roman influence of his armor. Threre's also a figure of a rams head on his belt. 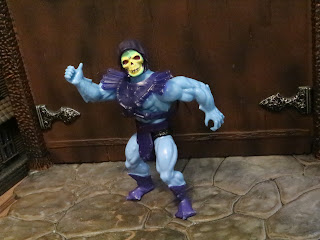 * Most of the vintage MOTU figures have nearly the same articulation and Skeletor, as part of the original 8 figures, definitely features the classic design. The vintage MOTU figures may not be very well articulated but they're dynamic and that battle ready pose certainly made them incredibly fun to play with as a kid. With his legs in a bit of a crouch, as if he's ready to leap, and his arms splayed out as if he's ready to grapple, Skeletor is read for battle and was a leap forward in toy design. 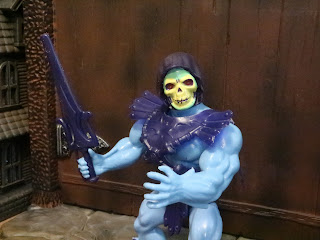 * Skeletor also also has a spring loaded waist for battle action! Twist his waist and let it go so that ol' bonehead can swing his sword or deliver He-Man a crushing blow to the face with his Havoc Staff. Nyeh nyeh nyeh nyeh! 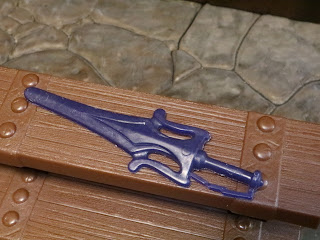 * The evil half of the Power Sword wasn't Skeletor's primary weapon but was originally included at the behest of Mattel's marketing as part of the play theme of having the heroes and villains fighting for control of Castle Grayskull. It can connect with He-Man's sword to create the key necessary to enter into Castle Grayskull. 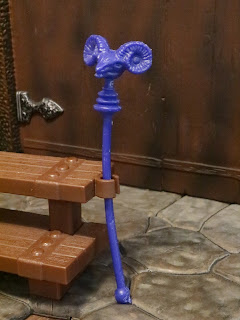 * Skeletor is best known for his Havoc Staff, a wicked looking magical staff adorned with the head of a ram. This is pretty creepy stuff for an early 1980s toyline for sure!

* Skeletor also came with a minicomic. Well, one of many, actually. Skeletor was packaged with many different minicomics during the vintage line. I don't have my originals anymore but it's worth noting that it was part of the original package. 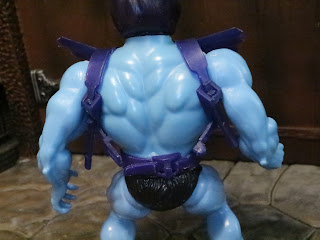 * My only negative is that some of the vintage armor, especially early in the line, was very flimsy. The back strap on my Skeletor has been broken probably since the mid-late 1980s. I wasn't born until 1983 so mine's not a first year release or anything but it's still vintage and has the brittle plastic armor. 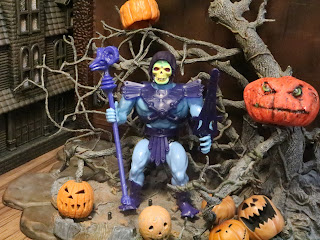 Skeletor definitely stands high in the pantheon of 1980s action figures and he's one of the most memorable aspects of Masters of the Universe overall. He's an Epic toy that's frightening in a good old fashioned swords and sorcery kind of way. Skeletor has cool armor, fantastic accessories, and a headsculpt that's definitely unsettling. What was your first Skeletor figure? I'm sure you had one! I'm going to be checking out many more bony lads and lasses over the next month including many more versions of Skeletor, so stay tuned! It's going to get spookier up in here every day until Halloween comes about!