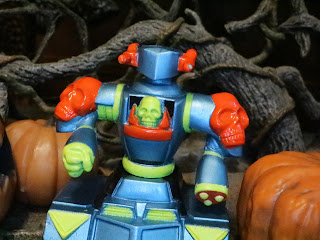 It's been a little over 4 years since I last reviewed a Trash Bag Bunch figure on here but since Halloween is a magical time we're going to make some minifigure magic and review another of these amazing little wonders! Today, for Skeletober, I submit Plutor! He's a robot, yes, but check out those skulls he's using for shoulder pads and the nuclear yellow skull that's revealed behind a panel in his chest. Spooky stuff! This is another item that's my childhood original and I'm thrilled to be able to show him off. The Trash Bag Bunch has a few other spooky skeletal characters in it (Fuminoid and Junk Jackal come to mind) but I've already reviewed those so it's now Plutor's turn. Let's check out this menacing mechanical monstrosity after the break... 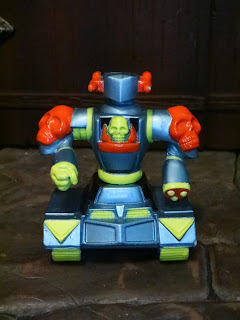 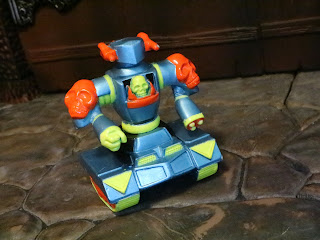 * Plutor is one of the evil Trashors and he looks like he means business! He moves around on treads and looks like he's loaded with some effective weaponry for battling the heroic Disposers. The metallic blue color scheme is awesome and is wonderfully complemented by reddish orange and neon yellow. 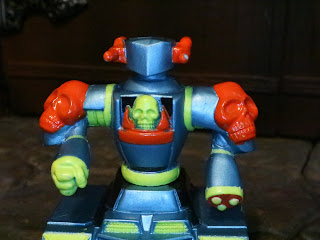 * Plutor's got lasers on the turret on his head, massive skull shaped shoulder pads (or are they shoulder pad shaped skulls?), and a neon green skull that looks like something out of Lisa Frank's goth phase. What's the deal with the skull? As a kid I always pretended that Plutor could launch the skull like a weapon. It would hit and explode causing radiation poison. You know, something that would feel like having the powdered coating of a 1000 Cry Baby gumballs injected into every orifice of your body before you vomit up your guts but now I'm not so sure that the skull isn't controlling the robotic body. Something to ponder, hmm? 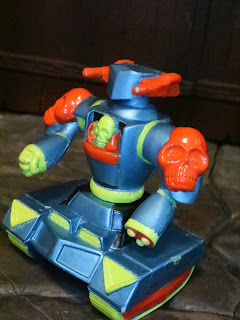 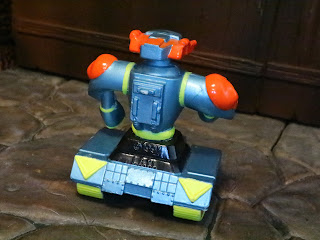 * The sculpt is pretty cool and the back of Plutor has lots of panels and such covering his inner workings. Maybe the secret to defeating him is going back behind here, opening the panels, and deactivating the menace. 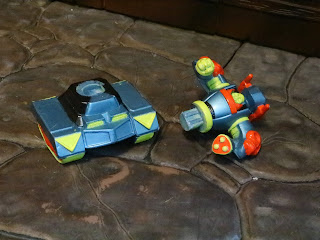 * My childhood Plutor was able to split into two pieces. He stays together just fine so I always considered this a bonus. 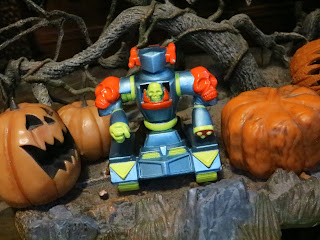 Plutor is one of my childhood original Trash Bag Bunch figures and one of the best in the line. He's an Epic machine that's both very cool and very creepy. Are you a fan of this line? The original toys had the gimmick that they came in a trash bag you threw in the sink, bathtub, or toilet if that's how you rolled, which would cause the bag to bubble and disintegrate, revealing the figure inside. Last Resort Toys has brought the line back in deluxe form in recent years so if you're a fan there's still some Trash Bag Bunch goodness to be had these days!