Action Figure Review: Wind Raider from Masters of the Universe Origins by Mattel 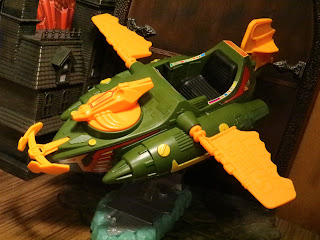 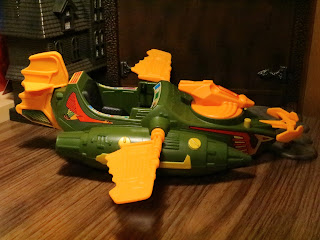 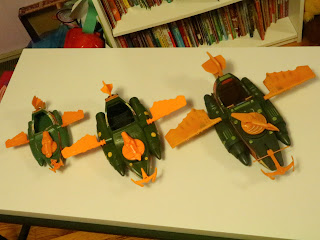 Comparison:
* Here's a quick look at the Origins Wind raider (center), the vintage Wind Raider (left), and the MOTU Classics Wind Raider (right). Size-wise it's right in the middle with the better sculpting and quality of the MOTUC versions but it still uses stickers for most of the cockpit details like the vintage. 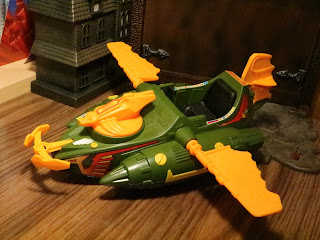 The Positives:
* At 14 inches long the Origins Wind Raider is a rather good sized vehicle. It feels sturdy and well made, like a smaller, less intricate version of the MOTUC Wind Raider. The colors are simple with most of the body the green color of the plastic and the orange elements unpainted. There are some paint details on the body and these look nice and add a touch more detail to the piece. 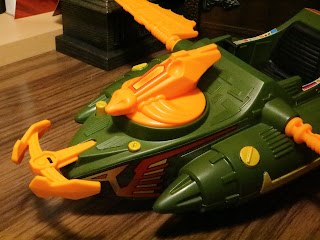 * The Wind Raider has a cool hood piece on the front that looks slightly animalistic, almost like the skull of something like a Pteranodon. The headpiece does rotate as it is the spool for the line attached to the launching anchor. 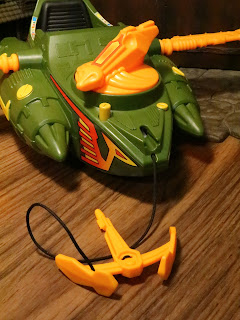 * The anchor launches out of the front and is attached to a length of cable. It's not terribly long but long enough to mess around with. Since the Wind Raider is an odd blend of a boat and aircraft there's always been speculation about what the purpose of the anchor like hook is. Supposedly the original purpose from the designers was that the anchor was used as a weapon. I guess you could hook it on to structures and tear them apart by flying off. Loosen the spool, launch the hook, and then rotate the headpiece again to reel it back in. 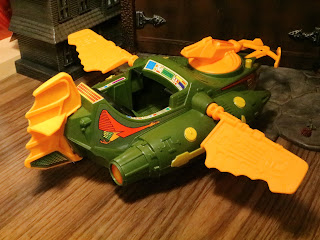 * The Wind Raider's wings and rudder are quite durable as opposed to the wings on the vintage toy. I think I've only ever seen one vintage Wind Raider with unbroken wings and that's the one I bought. This one isn't delicate at all and the wings can rotate while the rudder can swivel back and forth. 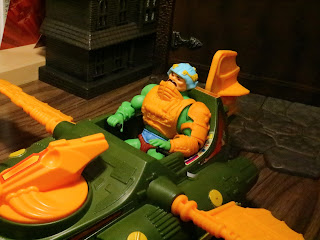 * The cockpit holds the Origins figures perfectly. There are even well positioned handles to give the figures a nice grip. 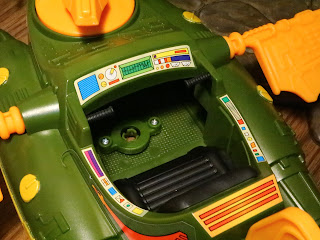 * Inside of the cockpit are some sculpted details although the control panels and such are represented  by colorful stickers. 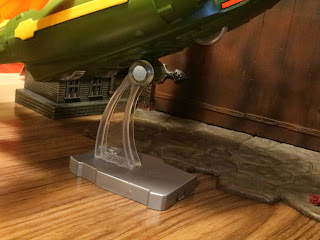 * Like the MOTUC Wind Raider or the Origins Sky Sled, the Origins Wind Raider comes with a flight stand that plugs into the bottom of the vehicle. The vehicle can rotate at the top and the peg can swivel up and down to place the craft in a flying pose. It's a nice extra that makes the Wind Raider a more dynamic presence on your shelf. 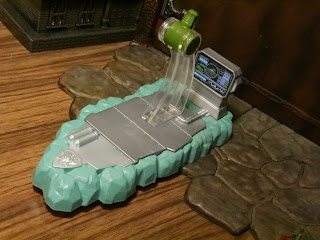 * The flight stand works fine on its own but it's even cooler when placed into the Grayskull inspired base included with the set. The base has a place for the flight stand to attach as well as some various details and a computer console. I really like stuff like this as it just seems cool and adds some play value to the set. It doesn't attach to Castle Grayskull but it looks great sitting inside of it, like it's part of some ancient landing platform or repair bay. 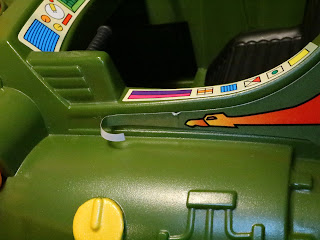 The Negatives:
* My only negatives with the Wind Raider have to do with the stickers: They were peeling off right out of the box! Here's a shot of the sticker next to the cockpit peeling off. 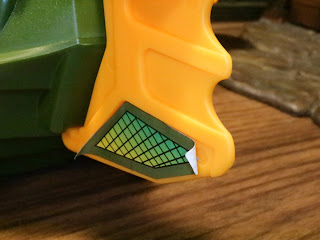 * Here's another shot, this time of the sticker on the rear rudder. I'm really surprised by this. Is anyone else having these issues with their Wind Raider? 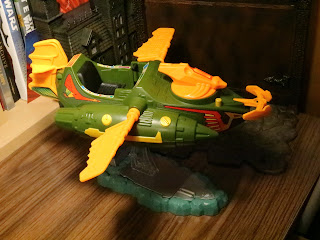 I really, really like this Wind Raider. It's not the work of art that the MOTUC Wind Raider is but it's a really nice toy that just looks cool on the shelf. The addition of the display base and flight stand just makes it better. Sadly, the only thing that mars this beauty of a model is the deficient stickers. What's going on with those? I can probably find a way to fix them so it's not a permanent problem but still a weird quality control issue. Otherwise, this thin is amazing and well worth the cost. It's a Great and a 1/2 vehicle and another solid addition to Masters of the Universe Origins, which is becoming a very respectable MOTU toyline.
If the Wind Raider is your ride I've also reviewed the M.U.S.C.L.E. Wind Raider from Series 3, pack E, and the orange Wind Raider with He-Man, the Hot Wheels Premium Wind Raider and He-Man and Wind Raider & Skeletor and Land Shark set, and the Mega Construx Wind Raider Attack set.
For more Masters of the Universe Origins reviews check out the following:
Battle Armor He-Man
Battle Armor Skeletor
Battle Cat
Battlefield Warriors
Beast Man
"Buzz Saw" Hordak
Castle Grayskull
Clamp Champ
Evil-Lyn
He-Man
He-Man and Prince Adam 2-Pack
Hordak
Land Shark
Lords of Power
Man-At-Arms
Man-E-Faces
Mer-Man
Ninjor
Orko
Panthor
Panthor (Flocked)
Prince Adam & Sky Sled
Ram Man
Rise of Evil
Roboto
Scare Glow
She-Ra
She-Ra (PowerCon Exclusive)
Skeletor
Stratos
Teela
Trap Jaw
Tri-Klops
Zodac
Posted by Barbecue17 at 10/20/2021