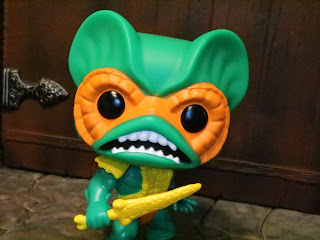 How about another POP! review to offset some of the earlier spookiness? Well, then again Mer-Man is kind of creepy, right? He's kind of like the Creature from the Black Lagoon but more powerful since he can actually command sea creatures. I love Filmation with all my heart but they definitely made the Evil Warriors largely seem pretty incompetent which seems at odds with how they're depicted as toys. These folks are Masters of the Universe. They're each at the top of their respective fields and are the best of the best in Eternia. While Funko is still cranking out lots of new characters in the POP! Retro Toys series of MOTU figures they're also redoing some of the characters released earlier in the POP! Television series. The Mer-Man released a few years ago was definitely based on his Filmation appearance but this guy is straight up based on the vintage toy. Let's check out this evil ocean warlord after the break... 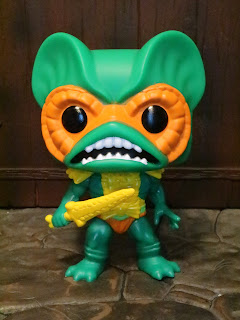 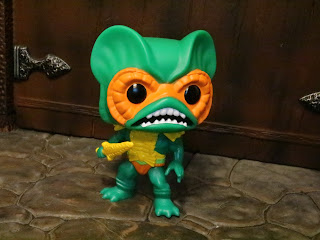 * Mer-Man's standing in a bit of a battle ready pose that kind of looks like the look of the vintage toys. You know, they were sculpted in a semi-crouched battle pose, too. He's got a swivel head and he's holding his sword out at the ready. This fishy fiend is ready to cause some havoc for the Heroic Warriors! 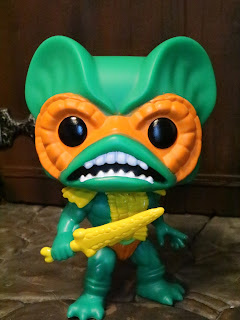 * Mer-Man looks excellent. I love the darker green used here for his skin and the yellow and orange of his trunks and armor look amazing. He's got fins sculpted on his arms and he has very.  long, fishy fingers, too. The armor looks great with lots of sculpted detail on the plate. 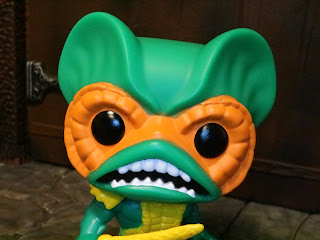 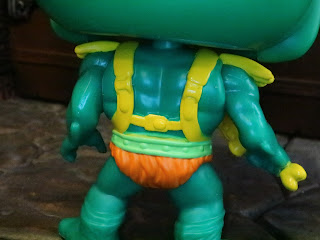 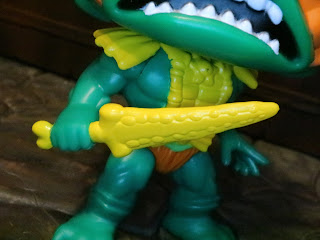 * Mer-Man is now sporting his infamous "corncob" sword. Yeah, it's suppose to be coral or a fish bone or something, but it definitely looks like an ear of corn. A deadly ear of corn. 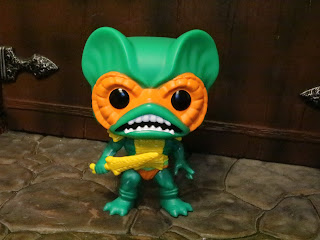 Mer-Man is another Great and a 1/2 POP! vinyl. I've been very pleased with what Funko has put out this year as they've offered up a pretty nice array of Masters of the Universe product for both POP! vinyls and Vinyl SODA. While the previous Mer-Man isn't too tough to acquire it's nice that some of the A-listers are getting redos. Hopefully Scare Glow and Ram Man will get redos as those two are almost impossible to get. We're still missing two more POP! figures of characters from the original series: Teela and Zodac. How in the world do we not have those two yet? This is crazy! Mer-Man is good but my wrath will not abate until I have a POP! Teela.

If you're a fan of Mer-Man, the guy who made talking to fish cool, then check out my reviews of the Masters of the Universe Origins Mer-Man, the M.U.S.C.L.E. standard Mer-Man and green Mer-Man figures, the Micro Collection Mer-Man, the Panosh Place Mer-Man Collectible Eraser, the MOTU Colorforms Deluxe Play Set, the Monogram Mer-Man bag clip, the Geeki Tikis Mer-Man, the Loyal Subjects' Mer-Man, Super7's neo-vintage Mer-Man, the Mondo Exclusive Mer-Man, the Vinyl Soda Mer-Man, the Mega Construx Battle Cat vs Roton set, the MOTU Origins Lords of Power set Mer-Man, and the ReAction Mer-Man (Invisible) and Mer-Man (Carry Case Color).