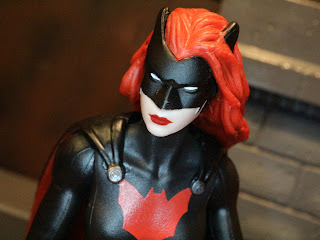 For years Batwoman has been one of my most desired action figures in any DC line. While DC Direct released one in 2007 as part of the 52 line it definitely doesn't fit in well with any of Mattel's DC Universe lines. I really expected to see Batwoman appear in DC Collectibles' New 52 line as well but she never materialized even though she had a solo title and was a part of the Batman family (yes, we got the incredible Bombshells Batwoman, but that doesn't count). Finally, to coincide with Mattel now going full steam ahead in offering DC Rebirth designs in the DC Comics Multiverse line, we have a true modern Batwoman action figure. Upon reading Batwoman at the beginning of the New 52 relaunch (which really was a true continuation of her pre-New 52 series) Kate Kane became one of my favorite comic characters. She's definitely in my top 10 overall and I'd probably put her book as one of the three strongest and most consistent of the New 52 as well. Now Batwoman both her own series in Rebirth and is huge part of the Detective Comics crew so Mattel has wisely given us a figure of her in the newest series which features a Clayface Collect & Connect figure. My Clayface series just arrived in the mail yesterday and I'm anxious to dive in and start things off with a look at Batwoman... 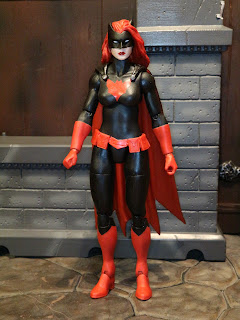 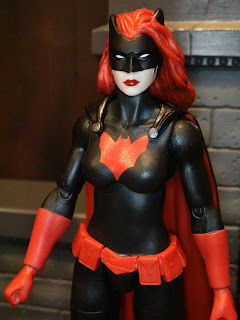 
* Clad in black and red with piercing white eyes and alabaster skin, Batwoman is a striking looking figure. Mattel did a great job in translating the character's incredible appearance into action figure form. Batwoman quite possibly has my favorite outfit of any character in Rebirth currently and it's nice to have her represented in action figure form. Mattel has used an entirely new body sculpt for Batwoman (so far as I can tell their is no reuse from previous Mattel figures) and I hope she is indicative of where the line is heading. 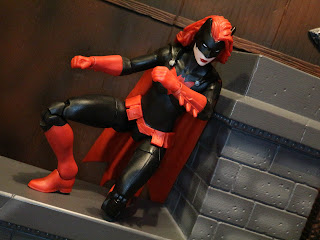 * Batwoman uses an updated articulation model that definitely improves on the older style of articulation Mattel has been using since the DC Superheroes series that predated DC Universe Classics. Unlike most other Mattel female DC figures Batwoman has double hinged knees, balljointed hips (instead of H-hinges), a balljointed mid torso, swivel/hinge wrists, and a head with a great range of motion. There are still some oddly missing joints ( swivel/hinge or rocker ankles being the most noticeable) but overall I like the progress shown here. Kate moves nicely and takes multiple poses well. 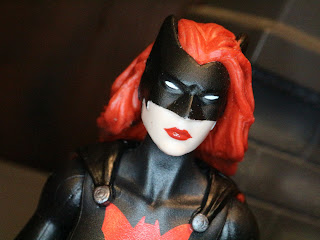 * Batwoman has an excellent headsculpt. I love the sculpt, most of the paintwork, and the way that the long, flowing red hair falls over the mask. 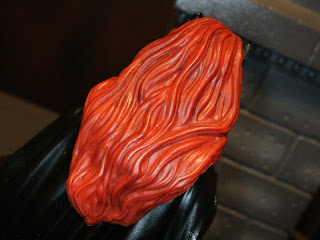 * The Batwoman's hair (remember, this is a wig attached to the mask as Kate usually has a bob or a very short hair cut) looks pretty nice with a good level of detail. There even seems to be a light paint wash on it to bring out a few more details. 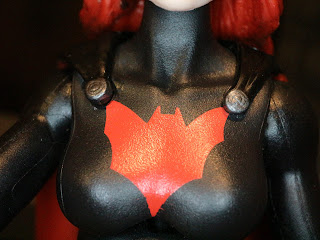 * The clasps for Batwoman's cape look really good. The cape is a separate piece that's molded from flexible plastic. It looks fine on its own but I really like how the clasps attach to Batwoman's costume over the shoulders. It's a nice effect that adds a lot of visual appeal to the sculpt. 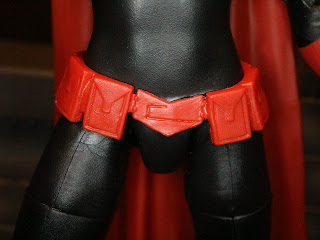 * The utility belt isn't absolutely knock me down amazing but it definitely has a cool appearance due to some light detailing and the fact that it's a separate piece permanently attached to the main body. It also nicely hides the hip articulation, too. 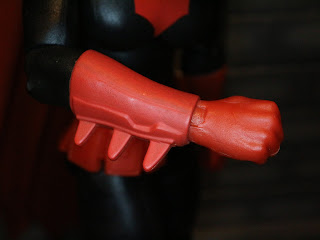 * One of the things I'm determined to do in nearly every review of a member of the Bat-family who has them is to check out the pointiness and durability of the spikes on the character's gauntlets. I'm happy to say that Kate Kane's gauntlets are excellent. They're pointy, straight, and look pretty slick. 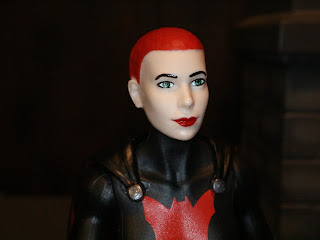 * I'm not totally sold on this headsculpt (I'll get to it a bit more when I go over the negatives of the figure) but I do like the fact that we get an unmasked Kate Kane headsculpt. Furthermore, it swaps on and off very easily. I was concerned based on some past Mattel DC figures that involved headswaps but this one works just fine. Hopefully we see more alternate portraits moving forward. 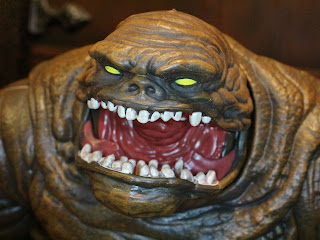 * The five figures in this series include the Collect & Connect pieces for Clayface, another member of the Rebirth era Detective Comics team. I'll be reviewing Clayface after reviewing everyone else in the series, so stay tuned. Batwoman includes his waist and his head. I'm always a fan of build a figures and I'm glad Mattel is continuing to include these as part of the line. Clayface looks like he is going to be fantastic. 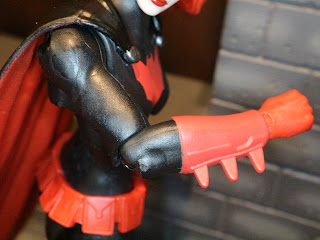 * At the very least any action figure should be able to bend their elbows as a 90 degree angle. Batwoman cannot and I find this incredibly disappointing, She also lacks bicep swivels, so her arm range is a bit limited. 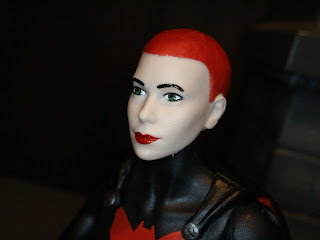 * I'm not sold on this likeness. There's something that's very off and artificial looking about it. I mean, it just doesn't look like any rendition of Kate we've seen nor is it even attractive on its own. 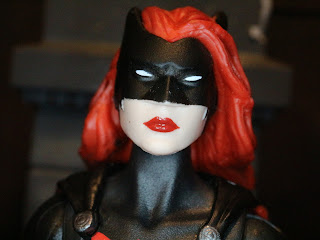 * This might seem like a nitpick but the paint on the bottom of the nose looks off. It is unpainted and makes it look like Kate has a large beak-like nose underneath rather than this being a shaped mask. 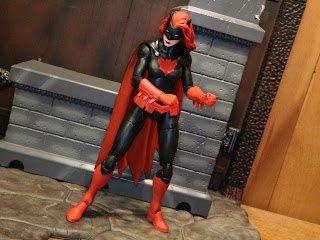 Despite some complaints (one of which is definitely kind of nitpicky) I'm pretty happy to have Batwoman. The paint and sculpt are incredible and Kate strikes as fearsome and striking of a visage in action figure form as she does in the pages of DC Comics. She's a Great and a 1/2 figure and hopefully the latest installment in what could be a great subset of action figures from the Rebirth Detective Comics team. Mattel definitely has showed some growth here and I hope they keep progressing in the quality of their DC Comics offerings.