Minifigure Review: Pack B from M.U.S.C.L.E.: Robotech by Super7 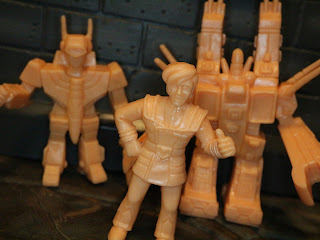 Since I reviewed Pack A from Super7's Robotech M.U.S.C.L.E. line I have actually started watching some episodes of Robotech on Netflix. I'm two episodes in so far and I'm definitely digging it. It's nice to get some more context for these little guys besides vague memories of the Matchbox toyline of the 80s and Toonami reruns. Overall I'm quite happy with this series of figures as the color is definitely fairly M.U.S.C.L.E.ish, the plastic is decent (still a bit too rubbery compared to vintage M.U.S.C.L.E.), and the sculpts are quite crisp. Plus, even if you don't know who these characters are you can still always have fun with robots and mechs. Let's take a look at Pack B (which contains Roy Fokker, a VF-1J, and the SDF-1) after the break... 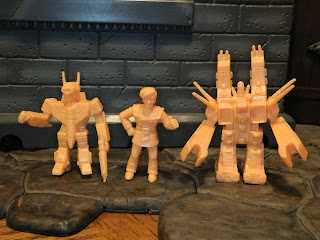 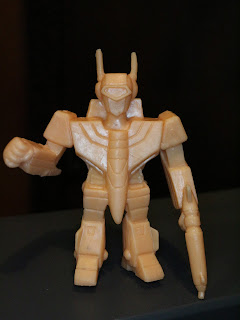 The Valkyrie VF-1J is, I believe, supposed to be Rick Hunter's ship in Battloid mode. The sculpt is crisp with lots of lines and a cool headsculpt but I do have one problem: The gun pod that the VF-1J is carrying is positioned in such a way that it actually extends lower than the soles of the Battloid's feet, meaning the figure cannot stand up very well at all. This is a really odd thing for Super7 to have missed, particularly on a minifigure. Just standing up straight is pretty much all they typically have to do. 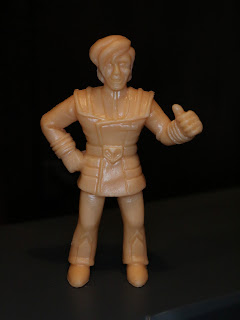 Only two episodes in and Roy Fokker (no relation to Gaylord Focker) is clearly going to be one of the big names. He seems like a cocky guy with a bit of an ego and this little minifigure captures that. He seems like he might be saying "Who's an accomplished fighter pilot wit great hair that just blew up a whole armada of enemy ships? This guy!" 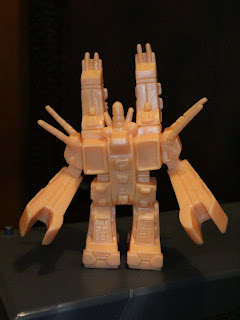 Holy smokes! This is the Battloid version of the giant spaceship that crashed in 1999 on Macross Island! I didn't realize that until I was trying to identify this piece for the review. Well, I guess I have something pretty sweet to look forward to in the show. This minifigure is based off of a massive warship called the Super Dimensional Fortress-1. In the show it crash lands, unmanned, on an island in the South Pacfic. The arrival of the ship causes all of humanity to stop warring against each other and to focus their efforts on repairing it in anticipation of an alien invasion. This is a very, very cool minifigure. 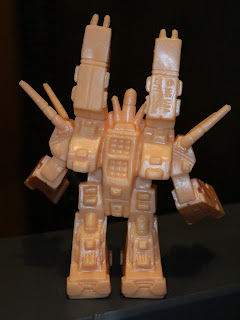 * Both the front and the back of the minifigure feature lots of detail. If you're not concerned about mixing your minis than this would look cool locked in battle against the Power Loader from the Aliens M.U.S.C.L.E.S. released last year. The body definitely looks like it is tilted to the side a bit but I'm not sure if that's a molding issue or a design decision to make the SDF-1 look like it is walking. 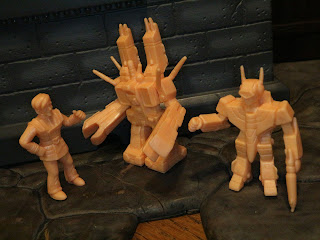 I like this set for the most part but I'm definitely a little frustrated with the overly large gun pod on the VF-1J. It's pretty odd to have a minifigure sculpting error like this preventing it from standing up. Roy Fokker is pretty cool as is the SDF-1, although it might have a bit of warping going on. This is a Good and a 1/2 set of minifigures; not the best Super7 has released but not the worst either. For $6 a pack, it's still a pretty good deal to be able to pick up some more M.U.S.C.L.E. figures.


I also reviewed the Robotech VF-1A in Pack A.

For M.U.S.C.L.E. reviews check out the following: