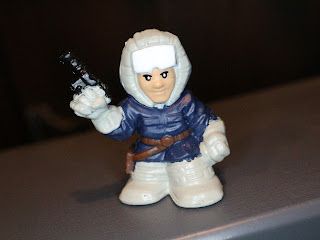 If the rumors are correct the trailer for Solo: A Star Wars Story should hit today. You know, less than four months before the film's release. My guess is that most folks outside those who eat, live, and breathe Star Wars don't even realize that the film is coming out. Unlike any of the previous films in recent memory Hasbro hasn't even set a release date for Solo product. What gives? That's not going to stop me from anticipating the release of the film, however, so between now and the film's May 25th release date all of my Star Wars reviews will be celebrating the Road to Solo! Starting things off today is a review of the Han Solo minifigure from the new Star Wars Micro Force blind bagged line. Each blind bag comes with two figures with the first series having 12 figures total. I picked up a pack of these last week and Han Solo in his Hoth Gear (blue, no doubt) was one of the two figures in my bag. Let's take a look at these cool little minis that have a striking resemblance to the Star Wars Fighter Pods figures from a few years back... 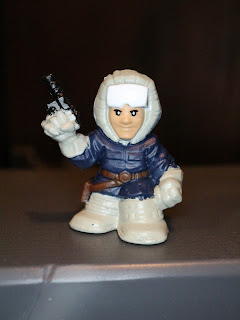 
* Han is decked out in his Hoth Gear (wearing the infamous blue coat that has started a million arguments) and he looks great. Considering that these guys are smaller than an inch tall I am very, very impressed by the sculpt and paintwork. Han has a smile on his face, his goggles pulled up, and a blaster in his hand. He still has the little hole on the bottom that the fighter pods figures used, too. 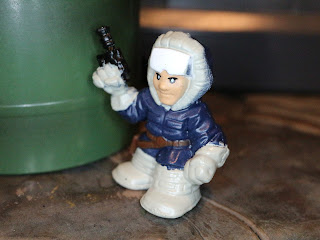 For such a small figure I like these. I do wish that more than 12 figures were available in series 1 (it seems far too likely that you would pull duplicates pretty quickly) but the figure himself is one of the nicest microfigures I've ever seen. Let's be honest: At less than a inch you're no longer really a minifigure; you're a microfigure. Han Solo is fantastic looking and a Great microfigure with excellent sculpting and paintwork.