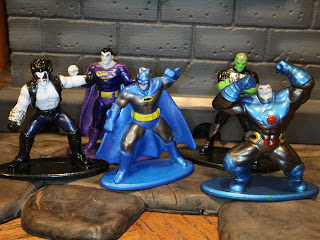 Today I'm back with another review of the second 5-pack of DC Nano Metalfigs that is new for 2018. It's called Pack B and includes three new characters (Lobo, Darkseid, and Bizarro), a new Batman, and a repacked Braniac. Braniac was the one figure I didn't pick up from last year's releases because he was only available in a 20-pack and by the time I learned of its existence I already owned the other 19 figures in the set so, personally, I am really glad he's included here! While not as many news outlets covered Jada Toys at Toy Fair 2018 by looking around I've learned that Jada showed off a ton of new DC Nano Metalfigs including the Atom, Ra's al Ghul, Scarecrow, a Rebirth Batman, a Cesar Romero Joker, a repainted Killer Croc, armored Lex Luthor, a repainted Wonder Woman, a Black and White Harley Quinn, Bane, Deadshot, Batman Beyond, a Tim Drake Robin, General Zod, more Justice League film heroes, and some Teen Titans Go Metalfigs. I'm super excited for these and I hope they continue cranking them out as fast as they can! Anyways, let's talk about who we have in hand right now, shall we? Let's tear into Pack B after the break... 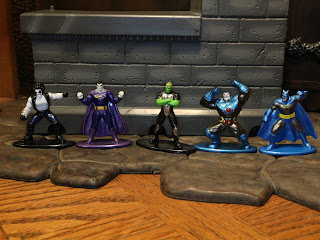 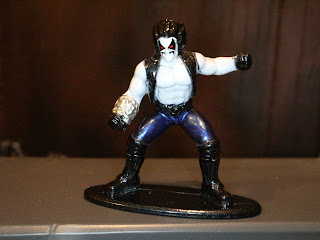 Lobo's 1971 hit "Me and You and a Dog Named Boo" was his first singe and propelled him to.... wait, wrong Lobo. This is actually the Czarnian bounty hunter from DC Comcis who is currently a member of the Justice League of America. I really like this figure as he's a unique character choice and not someone we usually see licensed at mass market retail. He's also a great looking minifigure with pretty clean paintwork, especially on the eyes. 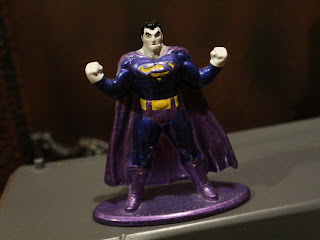 Bizarro definitely seems to be one of the few non-Batman related villains to make it into toylines but that doesn't mean that his presence here isn't appreciated. I love the look of this figure. The darker colors and work on the backwards "S" look great. He definitely looks like Bizarro and not just a repainted Superman thanks to the work on his headsculpt. That's a solid pose for the character, too; it's almost like he's mocking a classic Superman pose. 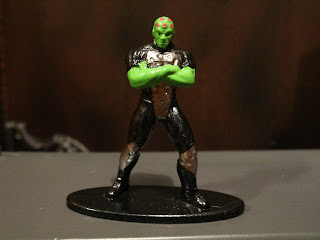 Braniac is one of those characters who has has so many radically different appearances that he can sometime be a bit unrecognizable. This isn't the case here, though, as while this is a fairly modern looking Braniac he also has the classic green skin and the pink ports on his head. I like the pose; standing with his arms crossed somehow gives him the appearance of having a smug superiority over lesser beings. 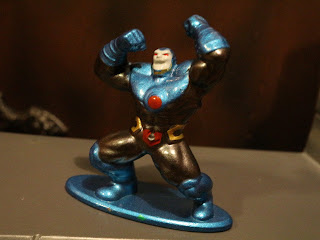 I'm thrilled to see Darkseid in this line but I'm not sure that I think he turned out as well as he should have. There's something off about the figure and it isn't just my preference for the classic Kirby Darkseid over the New 52 appearance. He looks more like Apocalypse to me, actually. I really think Jada Toys was trying to base Darkseid's pose on this specific comic panel. 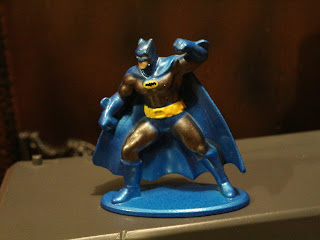 Last, and certainly not least, is this rocking Neal Adamas era Batman. This might be my favorite Batman figure that we've received yet in the DC Nano Metalfigs line. The colors, sculpt, and pose just look perfect. This is an excellent looking minifigure and the metallic blue cape, cowl, and accessories look slick. 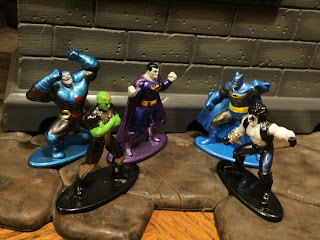 I really like this set. Maybe not as much as Pack A but this set adds some great powerful villains to the line as well as a super cool Batman and the wildcard Lobo. If Jada Toys keeps cranking out a great character selection, keeps these at such an attractive price point, and keeps distribution flowing, they could probably run this line for quite some time. I love picking up such a solid variety of DC Comics characters in this tiny scale. This is a Great set! It's just starting to show up at retail (I found mine at Wal-Mart) so keep checking those shelves!

These are the first figures of Bizarro, Darkseid, and Lobo that I've reviewed on Action Figure Barbecue.

The only other Braniac I've reviewed is the severed head of Braniac that comes with the One:12 Collective Red Son Superman.

Of course, I've reviewed so many Batman figures that he has his own archive: Check out the Dark Knight Gallery!