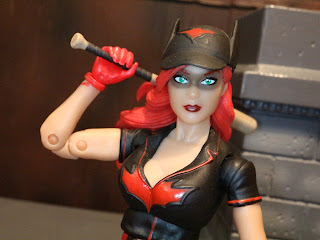 Today I'm checking out Bombshells Batwoman, the fourth and final figure in the first series of the Ant Lucia inspired action figure from the DC Designer Series. I'll readily say that Batwoman is tied with Hawkgirl as my favorite Bombshell design and statue. It might come off as a bit "punny" but I love the idea of Kate Kane running around as a literal "Batwoman," both as a 1940's era baseball player and a baseball themed vigilante. Kate plays a pretty big role in the Bombshells comic (which is really quite good) and is a just a stunning design, so she's really a figure to not miss. While I'm a bit aggravated that DC has released this figure before a true modern Batwoman action figure (Batwoman probably had the best costume of the New 52 and I'd tie her with the Snyder/ Capullo Batwoman as the most consistently wonderful book), that's totally on DC Collectible's often bizarre practice; this is a solid figure who just oozes moxie. Check her out after the break... 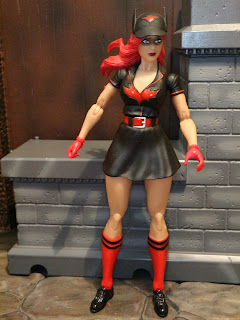 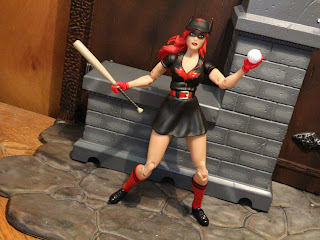 *  The Bombshells have some fantastic articulation in this line. It seems as good, and possibly even better, than DC Icons. At 6 7/8ths inches Batwoman is in scale with most of your other superhero figures (unlike Icons) and she moves as good, if not better than them. She's solid, durable, and has a pretty great range of motion. She is just so insanely fun to play with and to photograph. 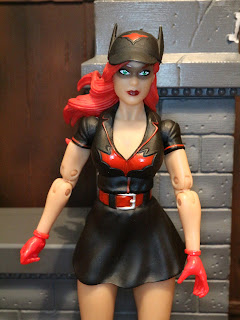 * Batwoman has one of my favorite Bombshells outfits as it perfectly combines a recognizable 1940s style with the character's comic book appearance. Red and black are the colors of the day here and they're just as striking as in any of Batwoman's modern outfits. The dress is very nicely sculpted and the red trim on the outfit helps to convey more depth and complexity to the outfit. Plus the ball cap with the bat ears? Brilliant. Fun fact: My wife is currently crafting her own Batwoman costume to wear to conventions this year! 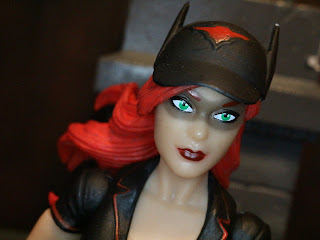 * Batwoman is gorgeous, which doesn't seem to be a rare thing in this line. The headculpts are all beautiful, as is the work on the eyes. To add more intrigue to the figure, Batgirl is also sporting some darker eyeliner or something over her eyes. It's a really cool look and helps to give her a more unique vigilante-like appearance. 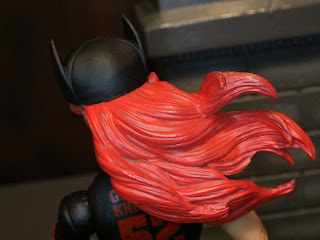 * Kate's hair is pretty nifty, too! It's sculpted in a windswept pose with some great detail and a nice dark wash to bring out the detail even more. 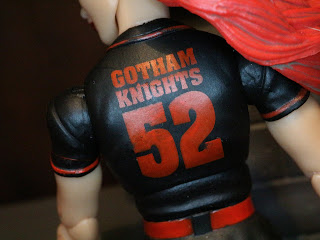 * On the back of her outfit is her player number (#52) and the team name (Gotham Knights). The printing is neat and clean, it's faithful to the art and the statue, and it makes the figure just seem even cooler. 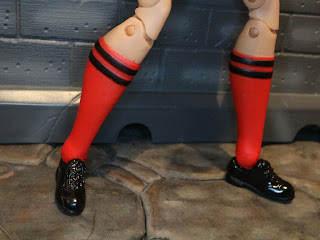 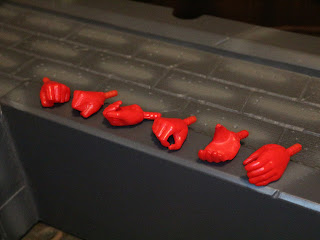 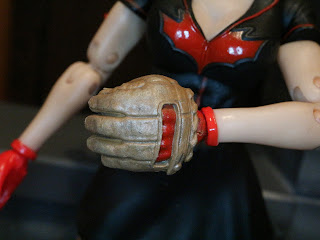 * Batwoman's 7th hand is perhaps the coolest of all: It's a baseball mitt. It fits on just like a hand and has some great sculpting as well as a nice, deep pocket to hold the baseball in. 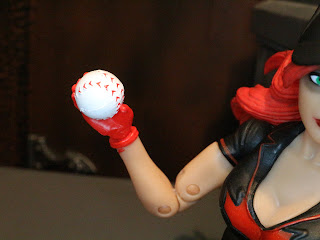 * And here's the baseball! It's white, it's round, and it has little red stitches. How much more "baseball" could you get? I really like this little accessory. There's a lot of fun to be had posing Batwoman utilizing this. 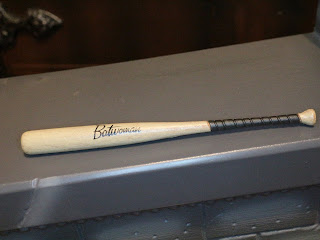 * Last, and certainly not least, is Batwoman's baseball bat. It's a pretty nicely sculpted bat with Batwoman's name on the bat and a bat symbol on the top of the bat. Great work here, too. Is Batwoman just playing the game or does she utilize her athletic equipment like Casey Jones? You decide! 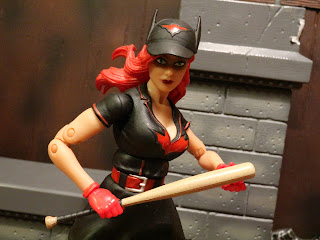 Batwoman is absolutely my favorite figure in the Bombshells segment of the DC Designer series so far. Despite being more of an Elseworlds type of concept, this is still a pretty darn good Batwoman figure. On it's own merits, though, this is an Epic figure. Kate Kane is a great character and this is version of her that manages show her ability to walk between two different worlds. Now, DC Collectibles, please make a version of Batwoman in her modern costume. Please?!


Looking for more Batwoman stuff? Then check out the following reviews I've written: The Kotobukiya Bishoujo Batwoman and the Lil' Bombshells Batwoman.