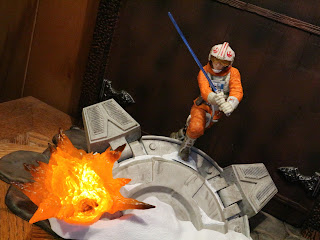 Today I'm checking out the second statue/ diorama from Hasbro's Star Wars: The Black Series Centerpiece line. I reviewed the Darth Vader Centerpiece statue a few days ago but, in case you missed that, the idea behind these small statues/ dioramas is that they are compatible with the 6 inch scaled Black Series figures. While Luke is mostly a statue, you can surround him with other Black Series figures such as Snowtroopers or the Wampa to create a scene for your display shelf. These were released on Force Friday 2017 and were met with a very lukewarm reception. I initially ignored these but after seeing them on sale at Best Buy a week or two ago I decided to snap them up. Luke is wearing his Snowspeeder pilot's outfit here, which makes this a version of the figure we have yet to see in the standard Black Series line. Let's take a closer look at Luke Skywalker after the break... 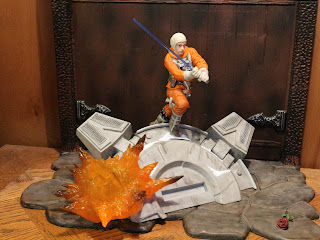 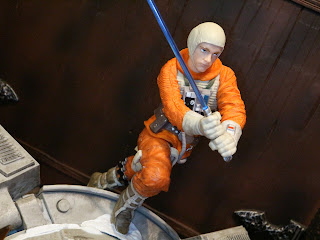 * Luke is a great looking figure. I love the weathered look of his outfit and the dynamic pose Hasbro chose for him. While this isn't a pose from the film, it's a pretty cool "off-camera" kind of scene: Luke charging over the foot of a fallen AT-AT and leaping into battle against an unfortunate Imperial adversary. These definitely remind me of the Star Wars Unleashed line from a decade or more ago. 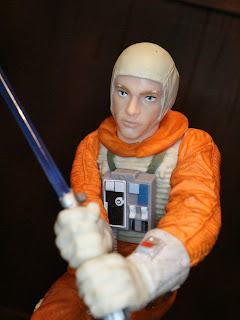 * Luke's outfit is really cool. The chest panel looks great and everything has very neat, very clean paintwork. The headsculpt isn't terrible, either. I think the presence of the hood is throwing things off a bit. It may not be the most accurate headsculpt but it does look like the other Black Series Luke figures, so I guess that's a plus. 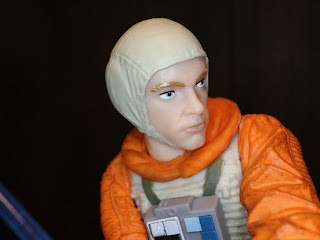 * Interestingly enough Luke's head turns! It's a swivel joint and it allows for a little bit of personalization when setting up your display. This is a great feature and, if this line continues, I hope to see it utilized a bit more. 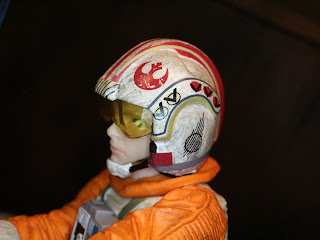 * Another cool feature is that Luke's helmet is removable. First off, this again gives you the chance to customize your statue which is always an option I like. Secondly, this helmet looks amazing. Seriously, the detail work here is just so, so good. Great job, Hasbro! 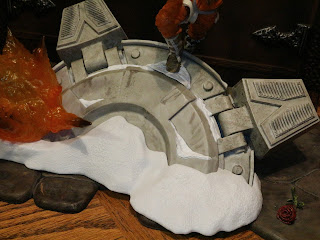 * The base of the statue is really cool: It's the foot of an overturned AT-AT buried in the snow. Luke is removable so if you just wanted to use this as a backdrop for Snowtroopers or something that could work, too. It's a pretty nice looking display. 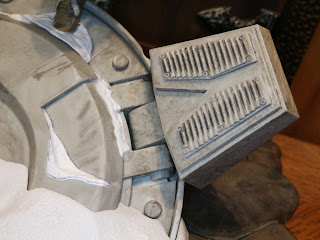 * The toe flaps (while obscenely hard to get on) are pretty good as they're both weathered and articulated. 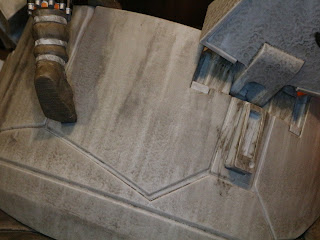 * The paint work on the AT-AT's foot pad is excellent. The weathering and detail really sells the battle worn appearance of the metal monstrosity. 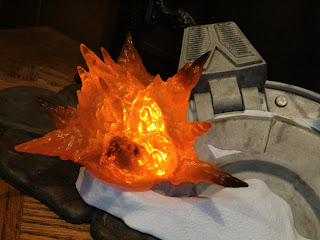 * Like Darth Vader, this statue also has a light-up feature. Press the little button on the base of the AT-AT's foot pad and the explosion on the left side of the statue lights up and flickers. When the light is on the explosion looks pretty cool. The explosion has a few different paint applications as well which makes the effect even more convincing. Also like Vader you can push the button for a short light effect or hold it down for a persistent light effect (it stays on until you push the button again). 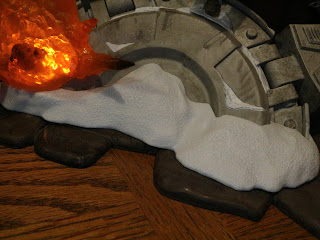 * To give you even more options on how to display this set Hasbro gives you the choice of two different snow covered bases. The first base is thin and works best if you plan on displaying Luke on his own. 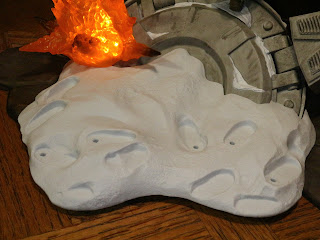 * The second base is quite a bit larger and features a number of footprints in the snow along with holes for the 6 includes foot pegs. 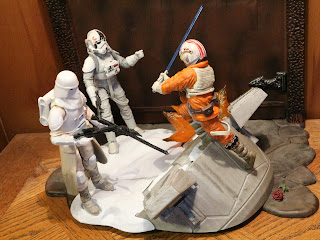 * Luke's base can hold a few Imperial troopers quite securely, putting them into position as if Luke is about to leap on top of them and eat their lunch. I really wish this were an actual scene from Empire. There aren't too many things that could make The Empire Strikes Back a better movie than it is but this probably would have. 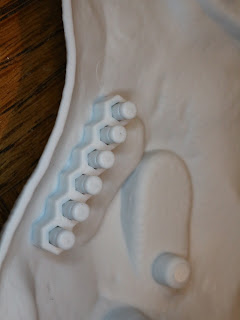 * The six foot pegs store safely and snugly underneath the base. 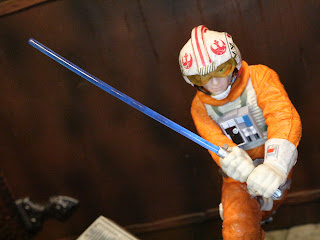 
* Like with Darth Vader, Luke's lightsaber blade is a real pain to get into the hilt. I really was concerned about breakage when putting this piece in so be very, very careful. 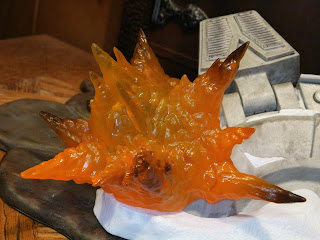 * The explosion looks awesome when lit up but when it's not lit up it looks like a giant chunk of ... something orange. Chuckie Finster's hair, maybe? 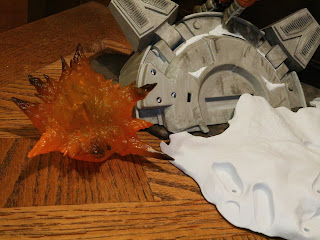 * Both the explosion and the snow bases do tend to detach from the AT-AT foot pad much easier than I would have liked. I can understand why you might want to make these pieces removable but moving it around and having these pieces detach is a bit annoying.

* Luke looks a bit passive for a guy who is in the middle of battle on an ice planet leaping over a downed AT-AT amidst various explosions to attack some Snowtroopers doesn't he? I think a statue like this was an excellent time to give Luke character a more extreme expression. 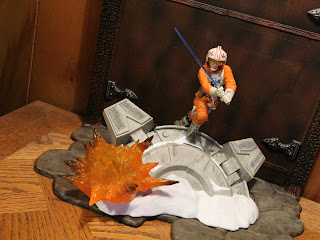 Maybe it's due to the versatility of the statue with various display options or maybe it's just because I like the setup of this piece better, but Luke Skywalker is definitely my favorite of the two Black Series Centerpiece statues. While the price on these seems a little too high at $50 dollars considering their scale and lack of articulation ($40 seems like a fairer price), this definitely can help you to create some cool Black Series displays. Luke Skywalker is a Great item and much cooler than I expected, particularly if you find for sale at a lower price.