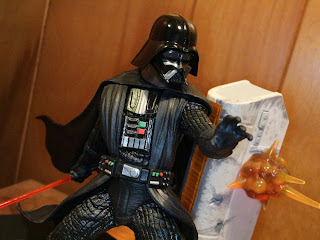 While we're not getting any Solo: A Star Wars story toys yet that doesn't mean that I'm going to hold off on reviewing Star Wars toys. There are still plenty of Star Wars toys, both old and new, that I'll be checking out over the coming months leading up to the release of the film. Today I'm checking out the Darth Vader diorama from the Star Wars: The Black Series Centerpiece line. Darth Vader is part of the pair of Centerpiece statues/ dioramas that were released on Force Friday 2017 to coincide with the release of the product from The Last Jedi. The idea behind these Centerpiece sets is that they are small dioramas with a dynamically posed (but non-articulated) statue that are in scale with the 6 inch figures from the Black Series. Essentially they're dioramas that you can pose your other figures around to make a cooler scene in your collection. I love the concept but these products had a few strikes against them when they were released. First, there was lots of other stuff that seemed moe exciting released at the same time. Second, at around $50 dollars they seemed a bit pricey for what you were getting. Lastly, while Hasbro went with solid character choices (Vader and Luke are always winners), they didn't necessarily pick items that went well in this format. A format like this would have worked great for a Han Solo in Carbonite display or for a sitting Emperor Palpatine with his throne room, figures that would have not fared as well in the standard Black Series line. The prices on these have dropped slowly over time and a week or two ago I took advantage of a Best Buy sale to order both Centerpiece sets for $20 each. Let's take a look at a fairly unique idea Hasbro tried out last year after the break... 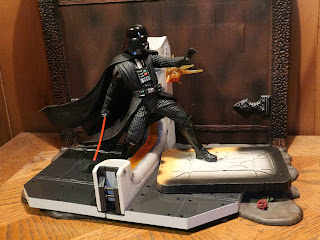 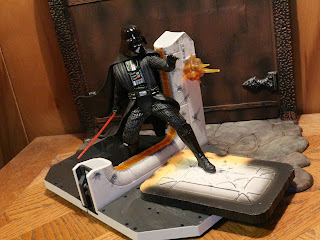 * There is absolutely something appealing about these Centerpiece dioramas and I definitely don't think you can tell what that is from the boxes. I really wish Hasbro would have considered releasing these in some sort of window boxes that would have enhanced the display. While Vader is made from plastic almost everything fears very sturdy and durable. This is clearly not a toy but the individual pieces are as sturdy as one. 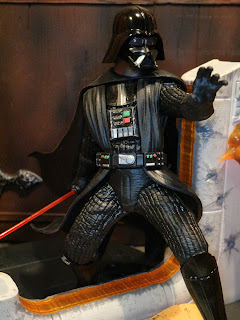 * Vader is non articulated nor is he intended to be displayed apart from the display (he has pegs on the soles of his boots). He's still a nice looking figure, though; he kind of reminds me of the older Star Wars Epic Force or Star Wars Unleashed figures or what we'd get if someone like McFarlane Toys were releasing Star Wars figures. The sculpt is solid, the proportions are great, and the pose is pretty cool. While the set definitely seems to be Vader storming on board the Tantive IV you could also use it as Vader storming the Profundity in Rogue One. 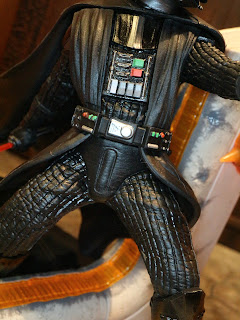 * The detail work and paint applications are quite nice. Maybe even a little better than the standard a New Hope era Vader from the Black Series.Of course, we're talking about the difference in a figure with no articulation and no soft goods versus a solid sculpt. Still, good clean work is always appreciated. 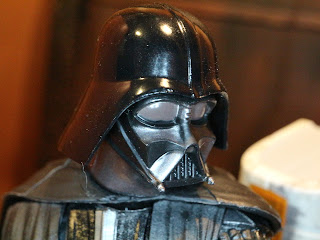 * The headsculpt is quite good as well. It's shiny with good paint apps and slightly red lenses. They're not as red as the standard Black Series A New Hope Vader but they look fine to me. The detail on the grating over Vader's mouth is excellent, too. 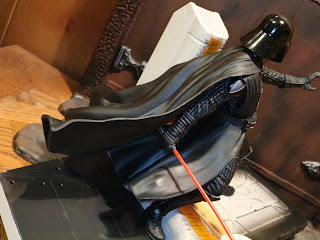 * Since he's a statue, Vader comes with preposed plastic robes, just like in the good old Power of the Force II days. The skirt and cape are flowing out behind the Dark Lord of the Sith, giving him a suitably menacing appearance. 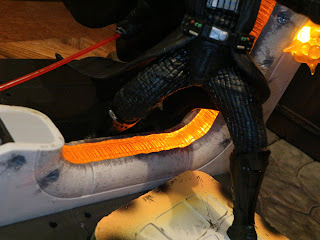 * One of the selling points of these sets are the inclusion of light up features which can be set to display in a short burst or turned on for a longer period of time. They use AAA batteries (you have to supply your own) but they look kind of cool. I really like the glowing edge of the door that Vader is walking through. It nicely illuminates the scene and definitely adds to the dynamic appearance of the piece. 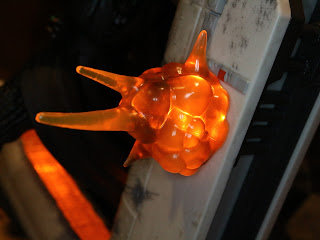 * The second light up feature is an explosion. There are lots of blaster scuffs and marks all over the visible walls on the set but this piece is intended to show a bolt actively hitting the wall. It's a translucent piece of plastic that is positioned over a light (you place it on yourself) and it flickers when you activate the light up feature. The button to activate the lights sits just above the explosion (you can see the edge of it in the picture). 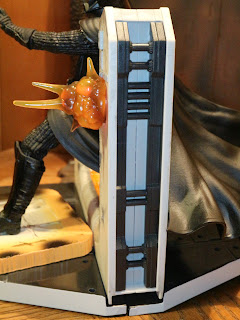 * The sides of the set feature a fair amount of detail designed to look like the structural support of the ship's hallways. 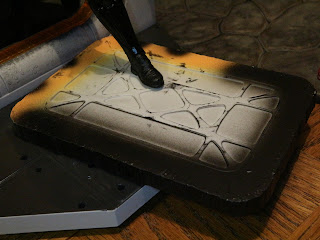 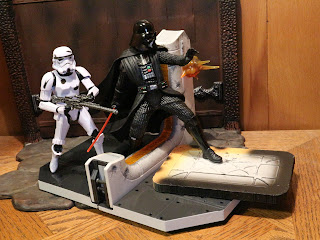 * One of the criticisms of Hasbro's work on the Star Wars line over the past few years has been that they release a lot of product that isn't compatible with their main toylines (1/18th scale and 6 inch scale).  I like that while the Centerpiece series is something "different" it is also is designed to be compatible with the Black Series basic line. There are footpegs and holes to add a few Stormtroopers alongside Darth Vader as part of an Imperial boarding party to create a fairly cool display. Now bring on the Rebel Fleet Trooper! 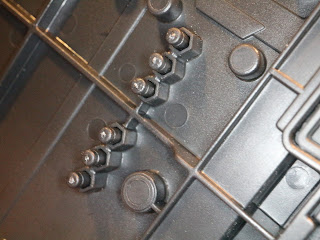 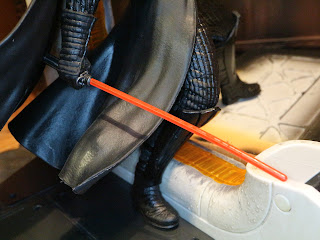 * Vader's lightsaber looks great but it is really, really frustrating to put into the hilt of the lightsaber. I was very afraid that it was going to break before I got it in there. Also, why in the world does the lightsaber not light up? We had light up lightsabers in 1997 back in the Force FX series of the Power of the Force II line. 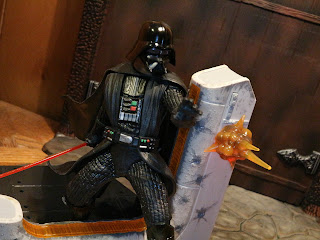 * The only problem with the composition of the set that I have is that Vader is shorter than the wall/door frame he is standing next to. There's something about that design decision that just seems really unusual to me. Why not make the door frame about an inch or two taller? 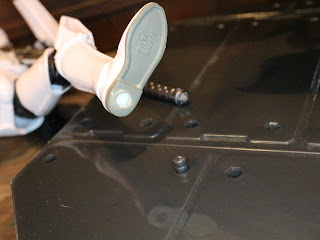 * Oddly enough, I was not able to actually get the Stormtroopers to utilize the footprints. The holes on their feet seem to be too shallow and too wide to properly utilize these pegs, which seems like a real oversight. 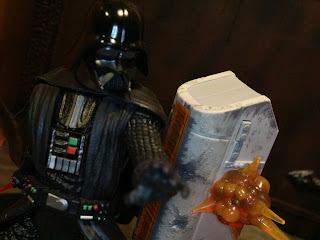 * I know that these are intended to be statues but, considering that Vader's head is already a separate piece that needs to be attached, it seems like adding something as simple as a balljointed head would have been a really cool idea. I'm a big fan of statues that allow for a little personalization in them 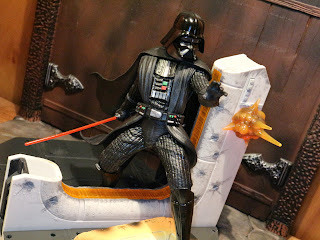 I'm very intrigued to see if Hasbro goes anywhere else with the Centerpiece Series. It definitely seems like it has potential if applied to the proper characters. Again, I could see this format being very appealing for a character like Han Solo in Carbonite, Emperor Palpatine on his throne, or even something like a Destroyer Droid. This is a Good and a 1/2 product that has potential (especially if you find it on sale or clearance ) and I think if Hasbro improves the character selection and how the line is presented (window boxes!) this could be a good thing. Hopefully the ship has not sailed on this line yet.