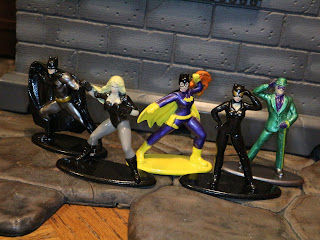 One of my favorite toylines of last year was Jada Toys DC Nano Metalfigs. Jada Toys is starting off the new year strong by already putting out some more cool little diecast metal DC heroes and villains. As a fan of DC Comics and minifigures, there is no way that I could ever pass up this series. Plus, they cost about a dollar each. That's a crazy deal! DC Nano Metalfigs has excellent character selection which makes picking up these little wonders just so much fun. This set has an incredible roster of characters including Batman (I'm pretty sure every multi-pack has Batman), Black Canary, Batgirl, Catwoman, and The Riddler. That's some A-list level star power right there. Let's check them out after the break... 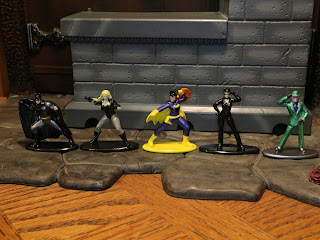 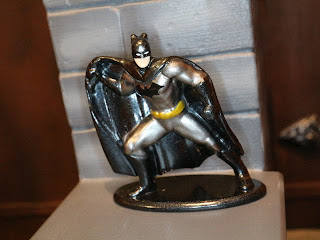 * Yes, there are already 9 Batman figures in Series 1 and 2 but who am I to ever pass up a Batman figure? This is a nice looking black and grey comic styled Batman with a cool pose. I love how he's puling the cape up as if he's preparing to perform some sort of evasive maneuver or unleash some special gadget. I also like how prominent the utility belt is. 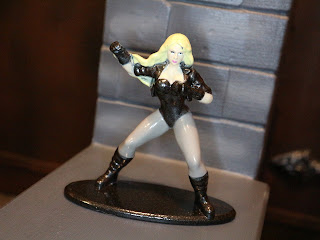 * If you don't love the Black Canary, you're lying. She's definitely a character who tends to get passed over a lot in licensing so I'm very excited to see her in this pack. Considering the scale, the way Jada Toys painted her fishnets is pretty impressive (they simply painted her legs a grayish-tan). She looks ready to throw down alongside the Justice League, JLA, JSA, or the Birds of Prey due to her pretty cool action stance. Black Canary is one of the exclusives to this set. 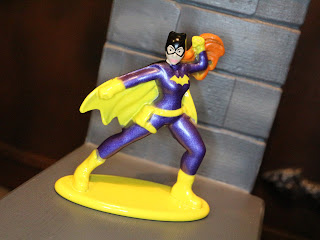 * Considering how many great and iconic costumes Batgirl has had over the years, it's pretty cool to see nearly everyone latching on to her newer outfit. The purple and yellow are just so hip (and yet so retro!) and make for an appealing looking figure. I had to look through quite a few sets to find a figure with a nice paintjob on the face (these are small and some faces tend to look messy), so be careful. 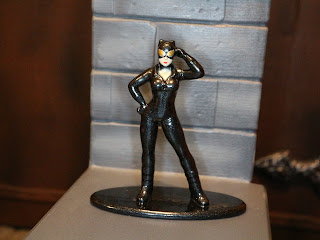 * When I think of Catwoman, this is pretty much the outfit I think of so it's nice to see Jada Toys go with this look (although I'd be all about seeing some more outfits that Selina Kyle has worn over the years). This is a pretty basic figure but they nailed a good pose for the character. They also did some really nice work on the teeny, tiny goggles. 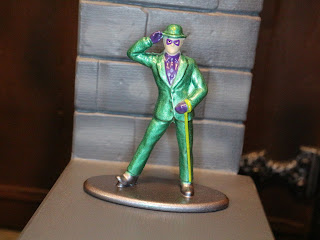 * Another good figure of a Batman side character just standing around is the Riddler. The metallic green and purple look pretty slick. The Riddler is also an exclusive to this five pack, so unless you want to remain un-puzzled you'll need this. 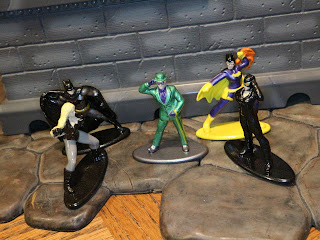 This is a Great and a 1/2 set loaded with some of the biggest names in DC, all of whom are affiliated with Batman in some way. I would think for that reason along this set will prove to be a strong seller. These are some of the neatest toys I've seen on store shelves in quite some time and I love them dearly. I hope Jada Toys keeps cranking these out because they are so much fun to collect. There really isn't a weak figure in this set!


If you're looking for more Batman reviews, check out the Dark Knight Gallery.

If you're looking for more Batgirl reviews check out the Batgirl Library.