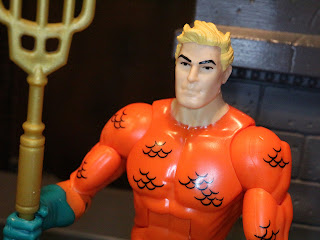 Last year Mattel quietly shipped Super Friends inspired versions of Batman and Green Lantern into stores. The end of the DC Universe Classics line had a number of Super Friends characters in it so these figures both tie into nostalgia and give figures like Apache Chief and El Dorado some other heroes to pal around with fighting the Legion of Doom! Recently Mattel has been shipping Suoper Friends version of Superman and Aquaman and I just had to pick up Aquaman. I might pick Superman up at some point (I kind of like the DCUC Super Powers Superman, so I don't feel overly compelled) but I knew I wanted Aquaman right away. There are definitely not as many Aquaman figures and the unique way that this Aquaman's costume is executed really works pretty well in person. I'm pretty confident that Aquaman and Superman only started shipping in 2018, so this makes him the first DC figure of 2018 I've reviewed. Crazy, huh? 2018 is the year of Aquaman! Let's check old good ol' Arthur Curry after the break... 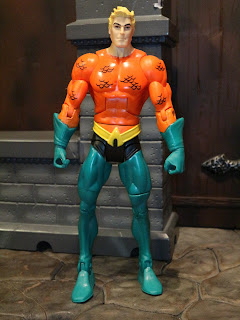 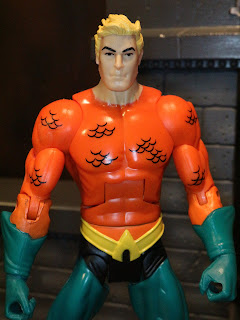 
* Aquaman is a pretty cool looking figure that differs quite a bit from the older DC Universe Classics Aquaman figure. Rather than have a textured scaled shirt this version of Aquaman has a flat torso with painted on scales to capture the look of the animation. Using the scales sparingly on the torso looks quite good and the classic Aquaman belt definitely looks on point here. I'm really digging this guy. 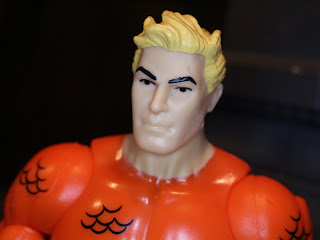 * Aquaman has a simple appearance that fits the animated style. Simple dark eyes and simple "yellow" blonde hair. For this style, it works. 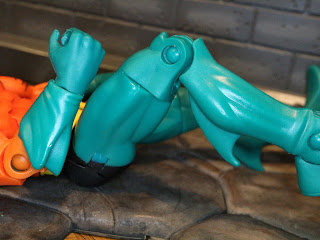 * Aquaman has his distinctive fins on both his gloves and his boots. It's a nice sculpted element that adds uniqueness to his design. 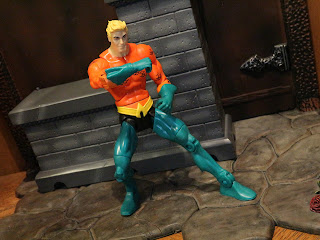 * Since Aquaman uses a fairly standard DC Universe Classics styled body, you know what to expect: It's a standard articulation model that is functional if not overwhelmingly impressive anymore. I mean, it's now over 10 years old. The figure is nice and sturdy and it's still fun to play with, however. I'm anxious to see Mattel finally update their standard bodies, though. 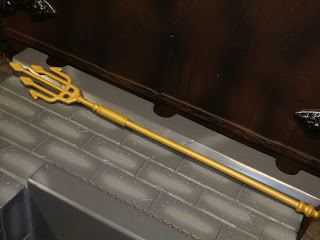 * I really like Aquaman's trident. It's not as cool as his super stylish and complex tridents from DC Universe Classics but it's also an improvement over the tridents from the movie versions. 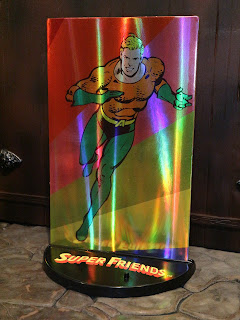 *   Mattel has been giving a few of their Multiverse figures these cool little stands that were first used in the Batman: Classic TV Series line. They're a nice way to display the figures on a shelf. This one is emblazoned with the Super Friends logo on the base. There's also a sturdy cardboard display card that features a shiny version of Aquaman on one side. 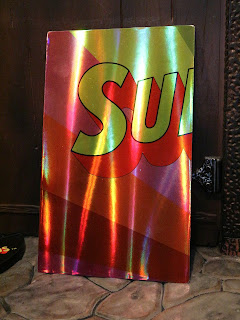 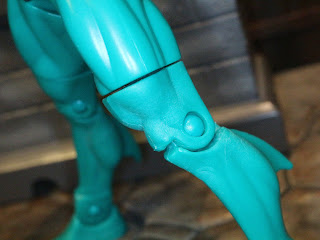 * It's difficult to tell in pictures but the plastic that makes up Aquaman's upper and lower legs doesn't quite match. The plastics seem to be of two different qualities and two slightly different colors. 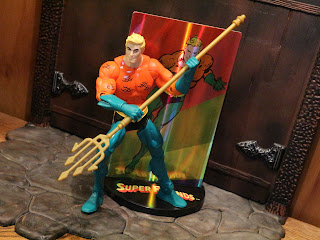 I was quite surprised by how much I liked the Super Friends Batman and I'm also pleasantly surprised by how much I like Aquaman. This isn't a very complex figure but if you're sold on the older Hanna-Barberra cartoon series than you're getting exactly what you probably want. He's well done and makes for a nice refresh of a popular character. Aquaman is a Good and a 1/2 figure and a solid bet for Aquaman fans or fans of Super Friends.


If you are looking for more Aquaman action figures I've also checked out the BvS Multiverse Aquaman, the Justice League Aquaman, the Toys R Us exclusive shirtless Aquaman, and the DC Nano Metalfigs Aquaman from the Pack B 5-pack.


If you're looking for more DC Comics Multiverse figures check out the following: