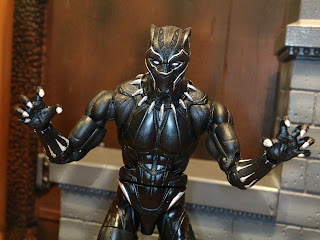 Black Panther already seems to be breaking records, giving Marvel Studios yet another hit. Arguably one of coolest characters in Civil War (and the character with the absolute coolest costume in the film), Black Panther has also been appearing pretty prominently in the toy aisles over the past month or so. Mavel started shipping the Black Panther movie based Marvel Legends figures in mid-December but I just recently picked this guy up at Walgreens. Between now and March 4th (I think) they have all of their Marvel Legends figures for $12.99. That's a steal on these! Even though I'm not a huge Marvel collector I absolutely love what Hasbro is doing with this line and I'll gladly pick up figures I like here and there as the mood strikes me. T'Challa is getting ready to step up into the upper echelons of popular culture and I couldn't be happier for him! Let's celebrate with a look at the new figure based on Chadwick Boseman's portrayal of Black Panther after the break... 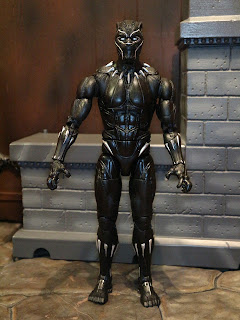 
Accessories: Two interchangeable portraits, two pairs of hands, and the head for the Build-a-Figure Okoye. 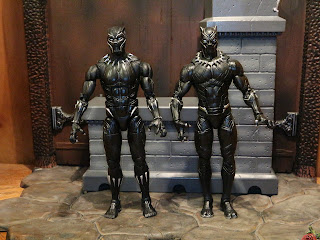 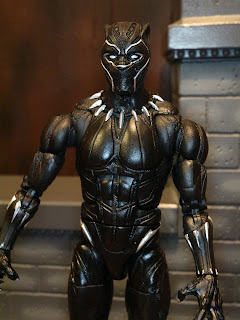 
* This is such a slick looking costume. The Black Panther has always looked as cool as a cucumber but this suit takes things to the next level. Hasbro did an amazing job of delivering a fantastic looking suit that's covered with seams and a few different textures to reflect the armoring. It's mostly just black and silver with striking white eyes, but that's just part of the aesthetic and it works oh so well. 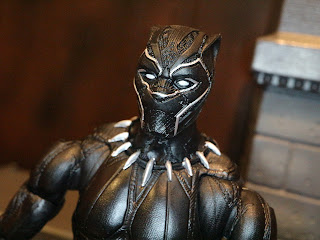 * The headsculpt on this new version of Black Panther is excellent. It's a bit larger than the Civil War version, but that means it looks more like and actual helmet/ mask with a human head underneath. 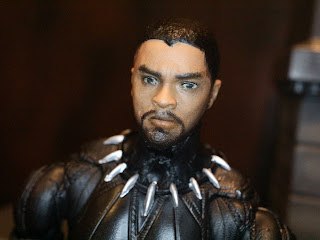 * Hasbro has really been doing some excellent work with face printing and T'Challa's unmasked portrait is another stellar portrait. There is a very realistic, almost uncanny realism to the headsculpt that looks quite a bit like Chadwick Boseman. While close-ups of the figure definitely show that this is printed, in person everything comes together even better to offer up something with a frighteningly good level of realism. 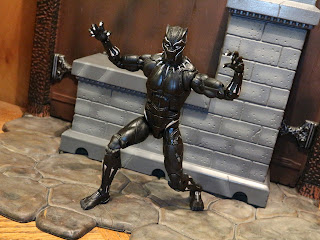 * The articulation on this new version of Black Panther is improved from the previous MCU release, too. He now has the lateral pectoral hinges (like Wolverine) that work great for a physical fighter who uses his claws. 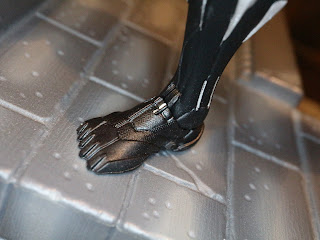 * I love the feet on Black Panther's costume. It's really cool how they're designed to look feline with an armored, robotic look. That's a super cool design detail. 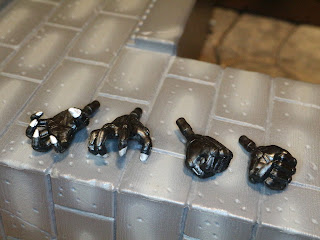 * Black Panther comes with two sets of hands: A pair of fists for punching and a pair of open hands for clawing. They swap out easily and look great, especially the claws. Open palms really make a figure feel more exciting and dynamic. 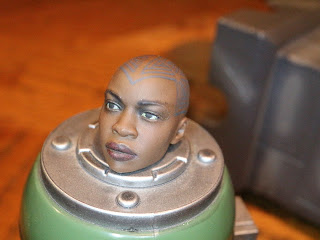 * Black Panther includes the head for the Build-a-Figure of Okoye, played by Danai Gurira. I'm not planning on building the figure so I'll be reselling the head but still, wow. That's an incredible portrait and it looks very accurate to the actress. Hasbro is on a roll with their likenesses lately. 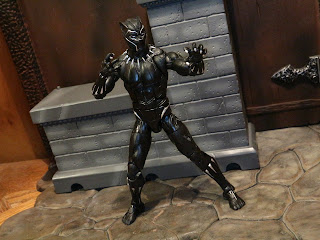 Hasbro took the greatness of the Civil War version of T'Challa and elevated it. By throwing in a better unmasked head, more articulation, and alternate hands into a completely new body, Hasbro has released an absolutely Epic version of the Black Panther. Wakanda's king has a new definitive movie based action figure and he's well worth hunting down. I can imagine that these will be more difficult to find come the film's release on Friday, February 16th, so snatch him up now if you can.


The only other Black Panther figure I've reviewed is the Civil War version.

If you're looking for more Marvel Legends Series figures, check out the following: