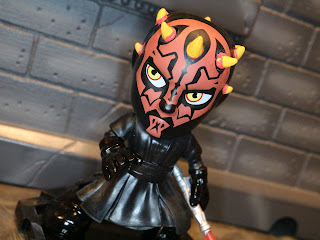 Today I'm checking out the second toy from the most recent Sith themed Smuggler's Bounty crate and it's a Mystery Mini of Darth Maul! I only have two Star Wars Mystery Minis thus far but I'm definitely OK with Funko continuing to include these as part of future crates. They're really cool little figures with a great aesthetic. I'm not a blind box fan so I'm reluctant to pay much to pick these up in stores but I'll definitely take the special ones that come my way. Here we are almost 19 years post The Phantom Menace and Darth Maul is still as cool as he ever was. While he rocked in Episode I I'm absolutely even more impressed by his great storyline in both Clone Wars and Rebels, along with a plethora of Star Wars novel and comic appearances. This figure takes us back to his first appearance though, so let's get nostalgic after the break... 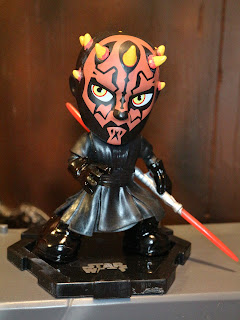 Non-Scalper Price: $25 dollars as part of the January 2018 Smugglers Bounty crate alongside a Count Dooku POP!, a Kylo Ren T--shirt, a Darth Vader pin, and a Darth Vader cup. 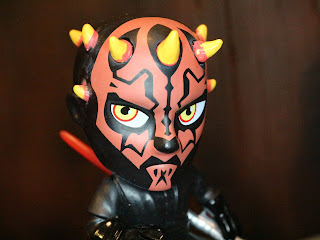 * The headsculpt on this is good but the paint is what really elevates it. The super clean lines and nice differentiation between the red and black look super. While he's in a diminutive scale he still look kind of menacing. He's actually kind of sick of you trash talking the prequels, so maybe you'd better stop. It'd be a shame if someone put a lightsaber through your larynx, you dig? 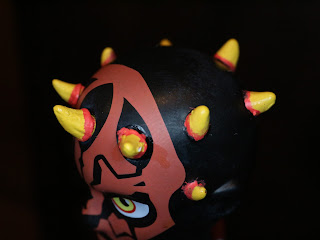 * The horns are great. They stand out from Maul's head really nicely and even have a few different paint applications to help them look pretty authentic. 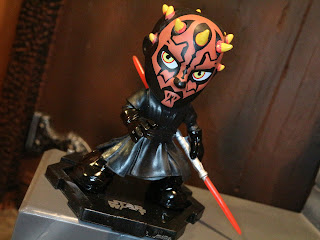 * The pose is also slick. I love it as this is totally Maul in a fighting stance during the battle at the Theed Palace Hanger. I don't care what you think about the Prequels: That is still one of the best scenes from any Star Wars film, ever and this little Darth Maul is just a reminder of that. Plus, the head doesn't just bobble a bit but it rotates, allowing you to change the look of the figure some. 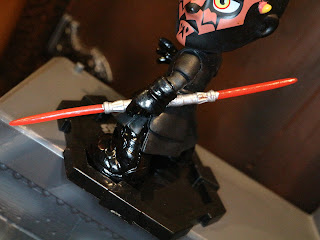 * His lightsaber is pretty cool, too. The paint and use of translucent blades just looks right. 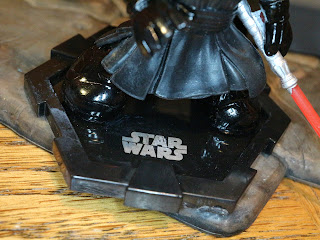 * Darth Maul permanently affixed to a stylish black plastic base with the Star Wars logo. If you have more than one Star Wars Mystery Mini you can attach them together via the "teeth" on the sides. 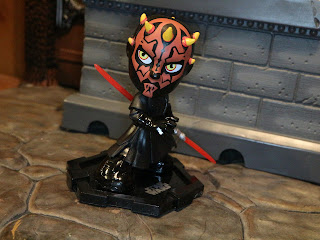 Gosh, this guy is a Great Star Wars minifigure. I love him! He's just so cool! I'm still such a Darth Maul fanboy and anytime I get something based on him I still feel as excited as I did back in 1999 when I received my first Darth Maul figure. Funko does such a nice job with these figures and he was a very welcome addition to the Sith crate.


If you also love Darth Maul, I've reviewed a few other figures of him including the Hero Mashers spider Darth Maul and the Sith Speeder & Darth Maul set, the Black Series Darth Maul, a micro Darth Maul from a set of microfigures from the Episode 1 Micro Machines line, and the Rebels POP! Darth Maul.

If you're looking for more Star Wars Mystery Minis, check out the following: