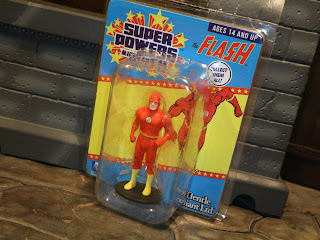 Recently Walgreens had a great sale on the Super Powers Micro-Figures from Gentle Giant Ltd. (99 cents each!) and I snatched up four of the five available (Batman was nowhere to be found but). The line was released in 2016 and consists of Batman, Robin, the Joker, the Flash, a Walgreen's exclusive Lex Luthor, and a SDCC 2016 exclusive 3-pack with Wonder Woman and Superman. I decided to review the Flash because as I've mentioned in another Flash related review, the Super Powers Flash was possibly the first DC Comics action figure I ever owned. That gives me a cool element of nostalgia when checking this guy out. Lots of folks have done Super Powers tribute lines but I think Gentle Giant's is the smallest (of course, they also do the giant figures, so they've got both the smallest and the largest covered). Let's take a look at this super small speedster after the break... 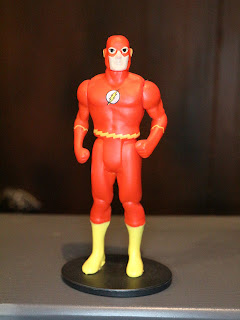 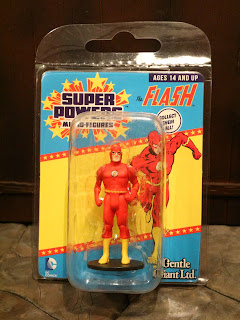 * The packaging on this figure is definitely part of the draw as it's designed to look like the vintage Kenner Super Powers packaging. I love the look of the bold, primary colors on this. The package is also easily opened and resealable, allowing you to take the minifigure out and out it back in. The package stands well on it's own so you can set it on a shelf or hang it using the peg hook (which can be removed if so desired). 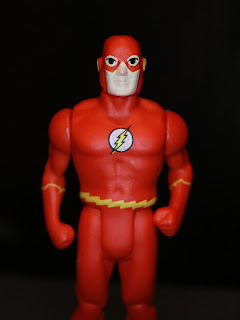 * I'm pretty sure that Gentle Giant has scanned vintage figures to create these sculpts so it is no surprise that the Flash greatly resembles his classic self. I love the classic Kenner appearance here. The proportions look great and the Flash logo is very cleanly printed. 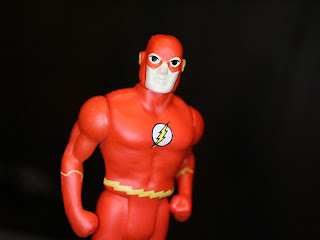 * While the figure looks like it has joints, those are mostly just for show. The neck does swivel, however, meaning that you can give the Flash a little personality in his posing. 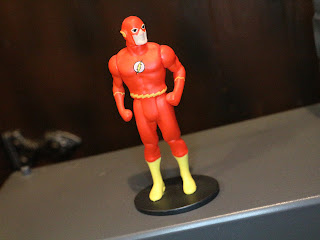 * The figure is permanently affixed to a small round display disc that keeps him standing up if you choose to display him outside of the package. It's a very neat, clean presentation. 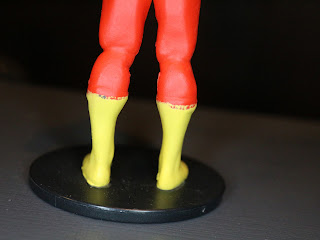 * On the back of the figure the edge of the boots looks a bit rough. It's where the boots meet the red bodysuit. 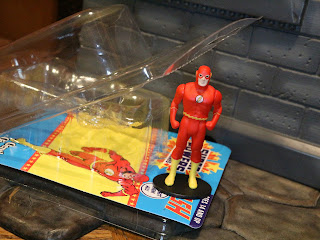 This is a very cool little collectible, especially if you manage to snag it for the $1 or so that Walgreen's is currently selling it for. Of course, that low price and the fact that these are still on shelves almost two years after their debut means that they didn't seem to sell very well. Maybe it was the limited character selection? It's kind of weird to not have Superman and Wonder Woman available other than as exclusives. Still, the Flash is a Good and a 1/2 minifigure and a cool piece of DC memorabilia, especially if you remember getting this actual figure!