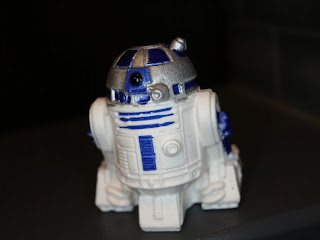 Here's another quick review of a microfigure from Hasbro's current Star Wars: Micro Force line: R2-D2. Remember, these little guys are released two to a pack in a blind bag for around $3 and every figure in the first series is simply a reissue of the figures from the older Fighter Pods figures. R2-D2 is one of the easiest figures to identify in the bag due to his unique size and shape. While there are lots of new, exciting Star Wars items that Hasbro and other companies have been showing off at New York Toy fair 2018, let's take a quick look at this little guy after the break... 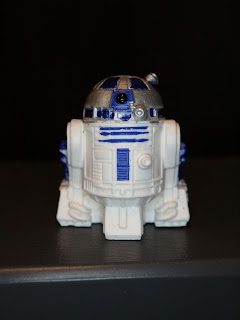 * Again, R2-D2 is a simple reissue of one of the R2-D2 figures from the 2012 Fighter Pods line. I wish I had picked those up when they were at retail as some of them have jumped up in price on the secondary market. I do like the design of this little guy because, at less than an inch, the detail and paint work is pretty exceptional. There isn't anyone alive who wouldn't dig a tiny R2-D2 like this. Well, not anyone I want to hang around anyways. 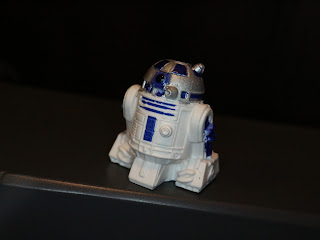 I definitely am not the biggest fan of blind bags (I just want to buy my toys, you know?) but I do like the Micro Force figures. There are 12 figures in series 1. I've purchased four packs and have now ended up with 1 duplicate so, at this point, I'm probably only going to buy these individually online if I can find them at reasonable prices. Still, that doesn't diminish the fact that R2-D2 is an excellent microfigure. He's a Great little droid.


If you're looking for more R2-D2 reviews then make sure to check out my reviews of the Micro Machines Classic Characters set, the R2-D2 Playset from Hasbro's Micro Machines revival, the Black Series R2-D2, and the POP! R2-D2 (Jabba's Skiff) #121.

For more Micro Force reviews, check out the following: