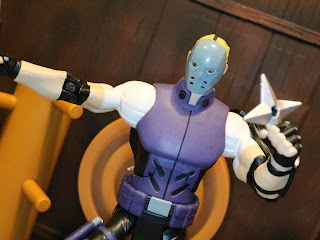 Last month I reviewed the Young Justice Red Hood which I purchased from a vendor at the January 2018 Shelby Comic Con in Shelby, NC. I also picked up the Young Justice version of the Sportsmaster and I'm going to be reviewing him today because, let's be honest, how many opportunities will I have to review an action figure of the Sportsmaster? I just read the latest volume of the Rebirth Harley Quinn series (Volume 4: Surprise, Surprise) and there was an issue involving a robbery attempt by the Clock King and the Sportsmaster which reminded me to review this guy. This is Lawrence "Crusher" Crock, the original Sportsmaster who fought Alan Scott, Ted Grant, and who married the evil Huntress (not the Helena Bertenelli Huntress). He's also the father of Artemis, one of the Young Justice stars. Let's check him out after the break... 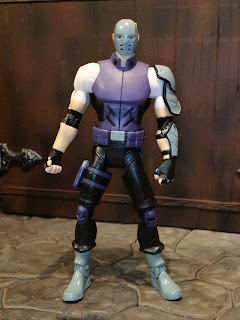 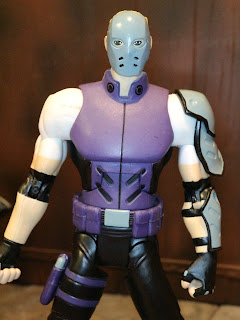 
* The Sportsmaster is a pretty cool looking figure. Yeah, he's wearing hockey pads, but they're pretty wicked looking hockey pads. His look is a mixture of very modern looking sports equipment mixed with tactical body armor. I love the purple, black, and grey color scheme going on here, too. He's animated enough to capture the Young Justice look while still being normal enough to fit in with your DC Universe Classics figures. 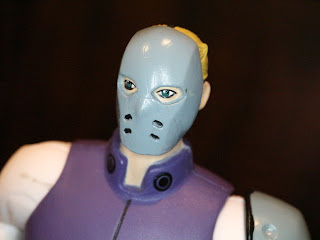 * The headsculpt is pretty cool. It's a very sleek, almost featureless hockey mask (unlike Casey Jones') that gives him a very 80's slasher vibe. His eyes look pretty menacing peering through the mask and the hair and straps on the back of his head are well done. 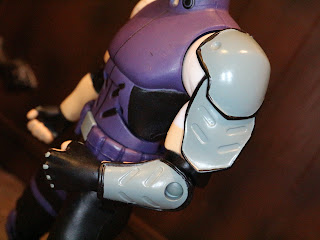 * Sportsmaster's left arm is covered with some armored athletic pads. They look great and have a fair amount of detail on them. The pads are separately sculpted pieces with the upper pads being more flexible so they don't inhibit the articulation as much. 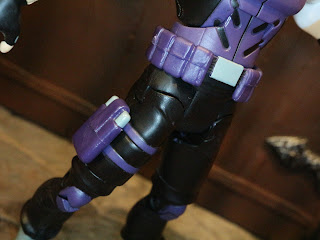 * Further adding to the tactical look of Cursher Crock's outfit is his belt and the pouch on his right hip. He's got lots of belt pouches to store little goodies in as well as something on his right hip. I'm not sure what it is, however. Maybe a collapsible fishing rod? Tubes filled with Gatorade? Extra jock straps? 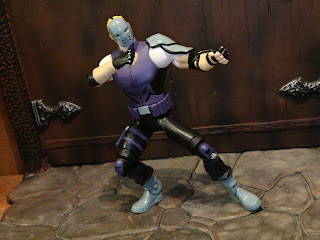 * The articulation is great and is as good as on any standard DC Universe Classics figure. He's solid, well built, and can take some excellent poses. 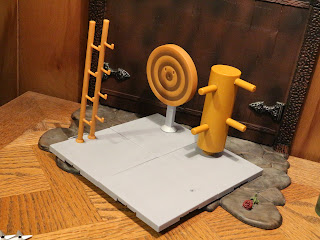 * Sportsmaster is a solid figure on his own but it's the massive amount of accessories he comes with that elevates him to a gold medal winner of a figure. First up is this large base with all kinds of training gear. It's made up of four separate floor tiles that you can connect in different ways. 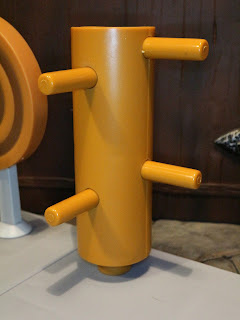 * The sparring dummy is quite solid and makes a nice extra for Sportsmaster to practice with in his secret lair when not battling the good guys. It is removable and can be placed in  the other spots on the base if you want to change things up a bit. 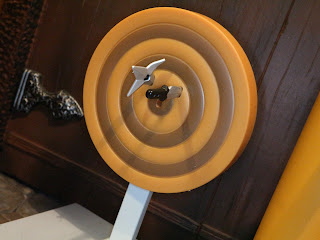 * Sportsmaster also comes with this cool bullseye. There are three slits near the center so that the included knives, shuriken, or boomerang can be placed as if Lawrence is having some target practice. 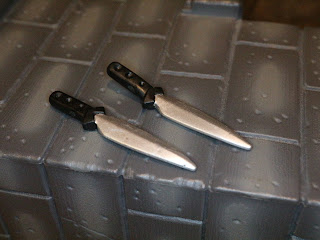 * Sportsmaster comes with a bunch of weapons. First up is a pair of throwing knives! Remember all of the fun you had with throwing knives in GoldenEye 007 for Nintendo 64? Now you can reenact those memories with these! 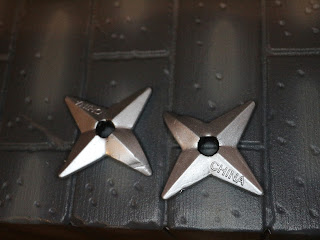 * You also get some authentic shuriken (well not too authentic, as these ones are clearly marked as having been made in China). Still, they're quite cool and a nice accessory to have around. 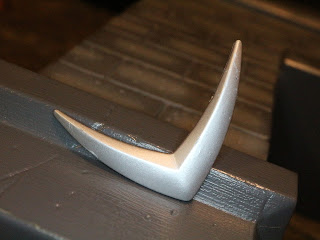 * You also get a boomerang. Yup, they're not just for Captain Boomerang anymore! Or Walkabout from TMNT. Or Skymate from G.I. Joe. Or Turbo from Coleco's Rambo line. Is that every action figure that ever came with a boomerang? Those are the ones that stand out to me, anyways. 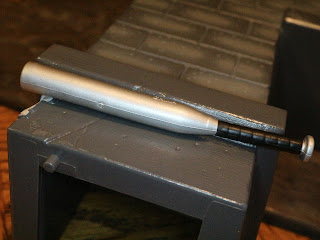 * Sportsmaster comes with a wicked look baseball bat. It appears to be metal and looks like it would cause some major damage. 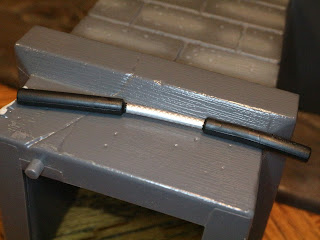 * There's also a pair of nunchaku from the great Olympic sport of chucking. They're flexible so they can be bent and positioned for authentic nunchaku poses. 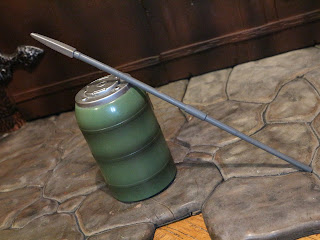 * Last, but not least, Sportsmaster comes with a javelin. It's a cool piece that does seem like it would make a wicked weapon in battle. 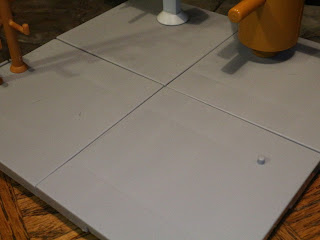 * The four pieces do attach together easily but they really wobble quite a bit. The fit could be sturdier. 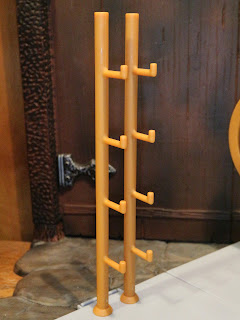 * I like the concept of the weapons rack on Sportsmaster's base but this is also quite wobbly, making it difficult to be of any real use. 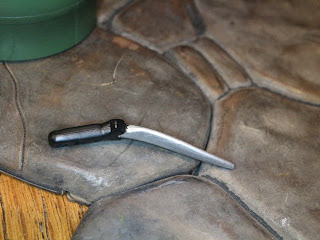 * Like many Mattel accessories, the knives, baseball bat, and shuriken are very rubbery. You could easily die the knives into a knot if you wanted to. 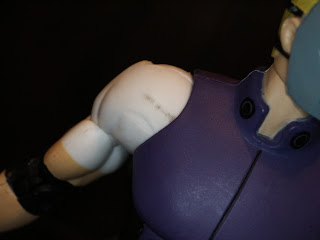 * Sportsmaster has some weird scuff marks on the white shirt he's wearing underneath. Pit stains or paint rub? You decide! 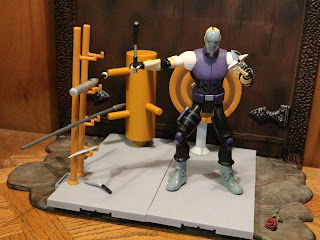 I largely passed up the Young Justice line when it first came out and now, looking back, I think that was a mistake. Sportsmaster is an excellent figure with a plethora of accessories and some cool elements to his display base. Yeah, he has some problems, but you're really getting a lot of good stuff here. I paid $15 dollars for him new in the package and I'm pretty thrilled with him. He's a Great and a 1/2 figure of a DC villain we don't see too often (he also appeared in the Brave and the Bold line and the 4 inch Young Justice line).


If you're looking for more Young Justice figures, check out the following:

Young Justice: Invasion by Mattel
Batman
Posted by Barbecue17 at 2/10/2018