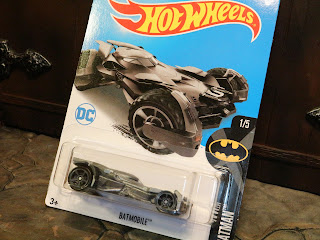 Anytime I find a Hot Wheels Batman vehicle in their standard line that costs around $1 I have to pick it up. Interestingly enough, I found a variant of some sort just a week or two ago. I was out at my local Walgreen's checking out toys and I noticed a Hot Wheels display. Rummaging through it to see if I could find any new Batman vehicles I was rewarded with a cool grey version of the BvS Batmobile. I was pretty sure I hadn't bought this one yet but, upon getting it home, I discovered I not only had already purchased it but I also reviews it in December. Well, kind of; this version is a dull gunmetal grey while the previous version I reviewed is a very dark metallic blue. While the overall set numbers are different (this one is 237/365 while the blue version is 329/365), the subset numbers are both 1/5. Weird, huh? Anyways, here's a quick peek at the BvS Batmobile variant after the break... 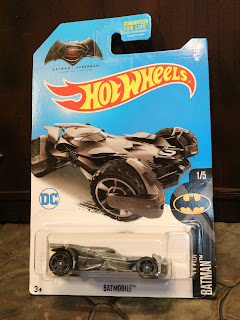 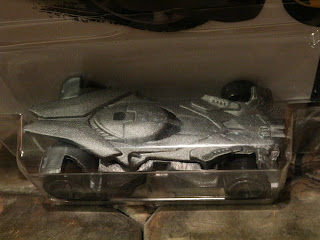 * I've already talked about this model but, I have to say, I love this gray paintjob much more than the metallic blue version. It looks much more accurate to the film and just seems a bit cooler. I actually leave these in the package (pretty much the only thing I buy which I keep packaged) so sorry for the lousy shots of the vehicle. 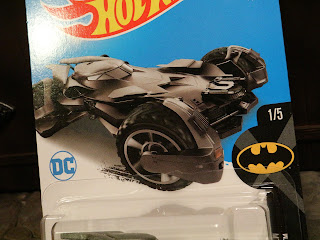 * Not only is the vehicle changed but the color on the card art is different, too.

I like this version a bit better than the blue version, so I'd give this one a Great rather than a Good and a 1/2. It's a nice sculpt and for the price you can't beat it. These seem to still be out on shelves so if you're looking for one be vigilant, just like the Dark Knight himself.