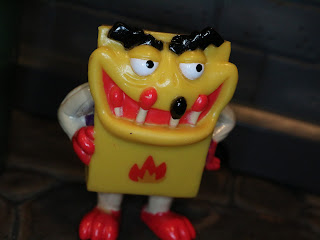 Today I'm checking out a minifigure I received in a recent Yowie. "What's a Yowie?" you ask? A Yowie is a chocolate candy shaped like a monster that has a little plastic container inside containing a minifigure. These minifigures typically take the form of various endangered animals and the Yowies who work to protect them. The Yowies are named characters who defend different habitats. My daughter and I are nuts about these and tend to pick them up if we're out and about with a sweet tooth. The chocolate is yummy and the minifigures are top notch. In a recent Yowie I discovered the first Grumkin figure I've ever seen and that's what I'm reviewing today: Spark. Apparently the Grumkins are the villainous little menaces who harm nature and Spark is essentially a firebug who doesn't care about destroying acres upon acres of forest land. He also looks like the kind of shady character who'd be hanging around a playground encouraging kids to smoke in an early 90s PSA. Let's check out Spark after the break... 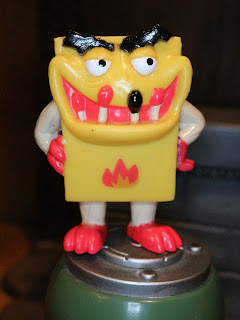 Non-Scalper Price: Around $2-$3 dollars, plus you get a hollow chocolate monster to eat. 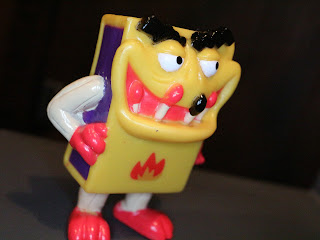 * I love this guy. The expression, the matches for teeth, and the awesomely over the top eyebrows just scream that Spark is bad news. He's an anthropomorphic box of matches and proudly shows off his devotion to fire on his chest. This dude is wicked and kind of looks like a guy who was rejected from a fire safety campaign because he actually encouraged kids to start more fires rather than deterring them. The paintwork is nice as is the sculpt. 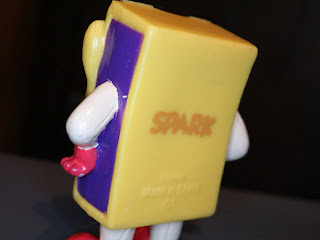 * In case you forget his name, this is Spark. Also, if you need to strike a match he absolutely is your guy due to the presence of the rough match striking surfaces on his side, just like you'd see on a matchbox. 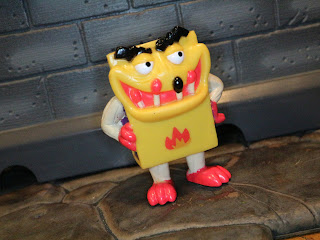 Whether you get into collecting Yowies, just like weird characters, or are a phillumenist, you're going to dig this guy. This is definitely one of the coolest minifigures I own and the fact that I pulled him out of a hollow chocolate monster that I purchased in the checkout aisle at Wal-Mart just makes him even better. He's an Epic minifigure as he's just so creative and hardcore.
Posted by Barbecue17 at 2/07/2018