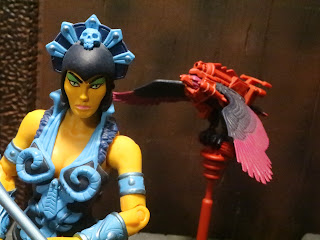 Remember how I had to review a figure of the Sorceress in order to add Zoar in for Masters of the Universe Month 2021? Well, I'm going to have to review Evil-Lyn in order to give Screeech his spot this month as I'm trying to cover different versions of all of characters, beasts, and vehicles from the 1983 series of vintage MOTU toys. Now I actually have already reviewed Evil-Lyn for this month as she's first appeared in the 1983 line as well but keep in mind that 1. This is all about Screeech and 2. I rarely need much coaxing to review a Masters of the Universe Classics figure. Evil-Lyn (and Screech) were released in April 2010, just a little over 11 years ago, and I remember ordering her, or trying to order her, from Matty Collector. Moss Man was my first MOTUC figure and Evil-Lyn was the first figure I ordered (or attempted to order) on the day of sale. Ready for a look at this evil sorceress and her evil barbarian bird? Then join me after the break... 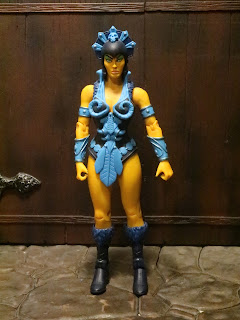 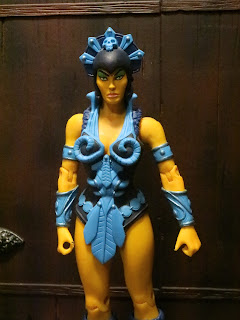 * Evil-Lyn shared the same basic body as Teela, just like the vintage Evil-Lyn did, but her bright yellow skin and blue outfit really makes her stand out from the rest of the crowd. The detail on her one-piece, which appears to be a slightly rubbery overlay that covers her torso, and on her bicep bands and bracers is excellent. The paint applications are excellent and really show off all of the details. I especially like the metallic highlights as it just makes her armor stand out all the more. 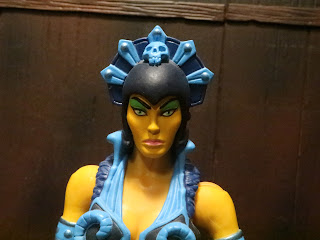 * Evil-Lyn turned out really nice! The Four Horseman did excellent work on the headsculpts in this line and Evil-Lyn is fantastic. The paint work, especially her green eye shadow, really highlights her features. She has a fairly neutral expression on her face though she does look rather serious and quite stern. The work on her headdress is really good and matches the solid paintwork on her outfit. 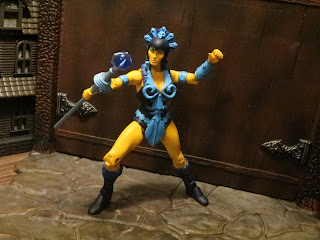 * While the MOTUC Classics body is a bit outdated these days I still really like it. They're fun, durable figures and the articulation scheme really preserves the look of the sculpt. I have no complaints. 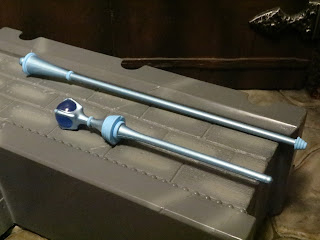 * Evil-Lyn comes with two different wands. Well, more accurately, she comes with the staff of two different wands. She has one headpiece but you can swap out either the short wand, like the vintage toy, for a longer staff, more like the 200x version of the character. It's a cool feature and just one of the was that MOTUC felt like a more deluxe and exciting toyline when it first came out. 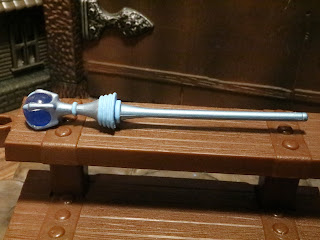 * The wand itself looks really cool. There are some great paint highlights on it and the orb atop the wand is made from translucent plastic, giving it a mystical, magical look! 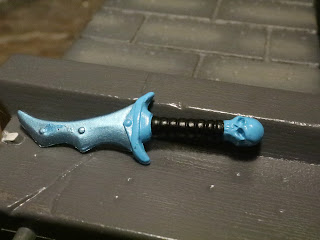 * Evil-Lyn also comes toting a dagger. It's a wicked looking thing with a jagged blade and a small skull shaped pommel. This is another item inspired by the 200x version of the character and it's a cool little addition to help Evil-Lyn in her sorcery! 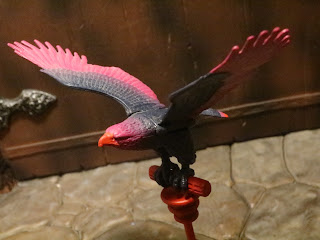 * And now, the reason for today's review, Screeech! Like Zoar, Screeech was a separate release in the vintage line. Screeech and Zoar were very large birds in the vintage line but here they've been scaled down a bit to a more normal size. The vintage toys were based on the Big Jim eagle and this Screeech was based on an eagle used in the DC Universe Classics Wonder Twins set. Mattel actually used this same sculpt a few times in their various DC lines over the years. 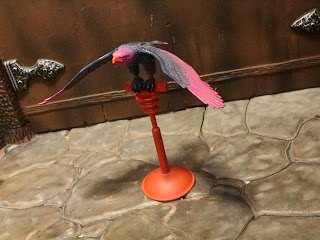 * Screeech has hinged wings and swivel talons and can stand atop the included perch. It's a cool accessory since the vintage toy had one and it allows the falcon to be displayed on your shelf. Screeech stays perched with out much difficulty. 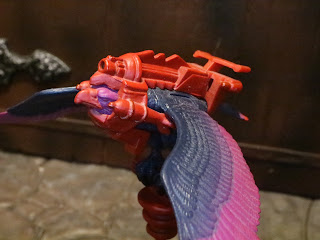 * Last, but not least, Screeech comes toting some serious battle armor. There are missiles, a laser cannon, and presumably lots of other gadgets that help give Screeech an edge in combat. 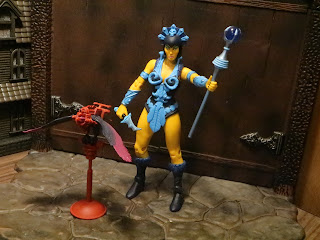 Evil-Lyn is an Epic figure and another very sold release form the era when MOTUC was just about the hottest thing around. She's got great accessories, a great sculpt, and Screeech as a companion. You were getting a lot of extras with some of these early figures in MOTUC and it made them, feel very deluxe and very exciting. Screeech definitely isn't that popular, despite everyone seemingly having owned one as a kid, but it was nice that MOTUC paid tribute to the vintage toy.