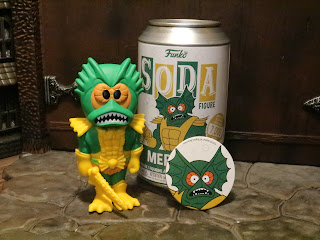 Mer-Man isn't my favorite of the Evil Warrors or anything but, man, do most Mer-Man products end up looking fantastic or what? Today I'm checking out another figure from Funko's excellent Vinyl SODA line and it is of course Mer-Man. Interestingly, this Mer-Man Vinyl SODA figure wasn't an exclusive from an online convention or something and just kind of popped up on the second hand market. Did Mer-Man even show up on sites like Big Bad Toy Store and Entertainment Earth? I never saw him anywhere! He wasn't expensive when I got him, though (standard retail price, really) so I have no clue how Funko directly got him out for sale. Funko is putting out a nice assortment of the Masters of the Universe crew in this line and it's nice to have another of the original 8 figures in this line. Let's dive in and check out Mer-Man after the break... 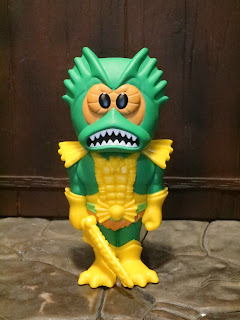 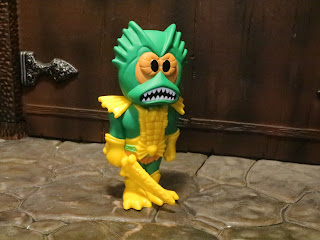 The Positives:
* The style of this line is just so darn appealing! They look fantastic, especially as a group, and they stand up so well. The style of the line reminds me of the breakfast cereal mascots of the past. Can't you imagine Mer-Man cereal? It turns your milk a murky green! 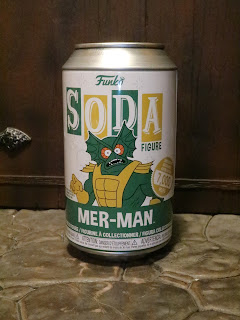 * I love the cans these come in! The soda can design is so incredibly cool and makes for a rather unique display piece on a shelf. Mer-Man soda would probably be something fruity, probably bluish-green and maybe with the little gelatin bits floating in it like the old Orbitz drink.  The can displays all of the expected labels while the back shows off the figure and includes all of the legal info, etc. The top of the can separates so you could use the can to store trinkets as well, and it's even sculpted to look like the top of a soda can. It's made from a much more durable metal than your average soda can, too, so it's quite a nice collectible. 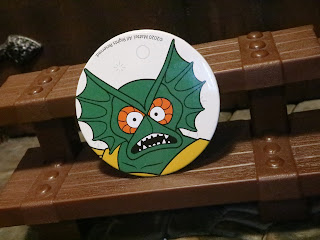 * Inside the can is a round, sturdy cardboard disc. It's kind of like a POG, though a bit larger. On the front is a picture of Mer-Man while the back has the edition size. 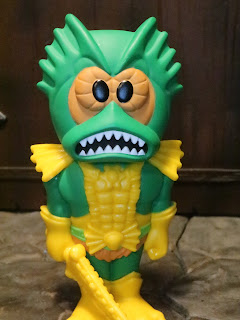 * Mer-Man might have the best sculpt in this line yet! I love, love, love the detail on this guy. Yeah, he's still stylized, but he's there is some excellent work on his armor and the colors are just fantastic. He's a lot brighter than the vintage toy but he looks brilliant. 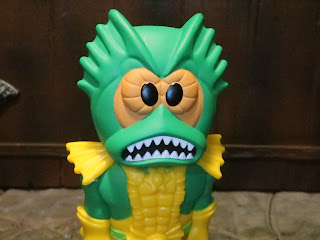 * Count me as someone who has never been a fan of the vintage Mer-Man headsculpt. I've always enjoyed the cross sell and Filmation styled heads for Mer-Man more. This one feels like a mixture of all of the different headsculpts with a really stylized look. I'm really digging the cool design on his eyes and the excellent work on his teeth. the paint is super neat and clean and everything looks as sharp as a piece of coral. 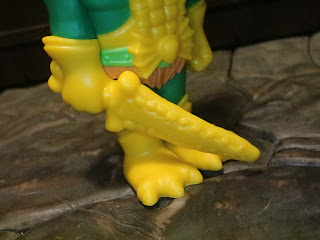 * Mer-Man is toting around his classic underwater sword which really looks like a piece of corn on the cob. Still, nice detail and it really completes Mer-Man's look. 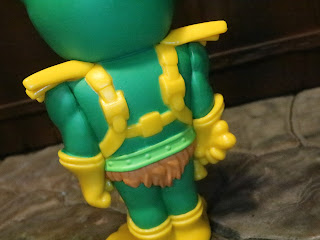 * I really do want to point out the fantastic work on the back of the figure. The straps of Mer-Man's armor looks just like the vintage toy with the visible fasteners as well as the fuzzy trunks, stylish even under the sea. 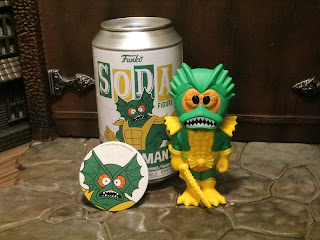 Mer-Man is probably the star of this line so far and he really is a fun, colorful little pop culture collectible. He's really fantastic looking and I'm thrilled by how well he turned out. It's weird that he kind of leaked out with little to no fanfare but fortunately he seems fairly easy to locate so far. Mer-Man is an Epic vinyl figure and is definitely a must have if you're collecting this line or if you're a fan of Mer-Man. I'd love to see Funko make a real effort to complete the original eight MOTU figures from 1982 although that means they'll have to get over their aversion to Teela. What does Funko have against Teela, anyways?

If you're a fan of Mer-Man, the guy who made talking to fish cool, then check out my reviews of the Masters of the Universe Origins Mer-Man, the M.U.S.C.L.E. standard Mer-Man and green Mer-Man figures, the Panosh Place Mer-Man Collectible Eraser, the MOTU Colorforms Deluxe Play Set, the Monogram Mer-Man bag clip, the Geeki Tikis Mer-Man, the Loyal Subjects' Mer-Man, Super7's neo-vintage Mer-Man, the Mondo Exclusive Mer-Man, the Mega Construx Battle Cat vs Roton set, the MOTU Origins Lords of Power set Mer-Man, and the ReAction Mer-Man (Invisible) and Mer-Man (Carry Case Color).