Action Figure Review: Goldberg from Masters of the WWE Universe by Mattel 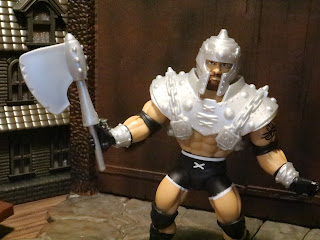 Who's next? Why it's Goldberg, of course! I recently stumbled upon most of series 6 of Masters of the WWE Universe while checking out an out of town Walmart. I found everyone but Kane, so I'm still on the hunt for him. Which Masters of the Universe character is this version of Goldberg inspired by? Ram Man! Billed as the Heroic Human Jackhammer Goldberg is ready to plow his way through his enemies! Ready for another interesting amalgam of the MOTU aesthetic with the star power of the WWE? Then join me after the break.... 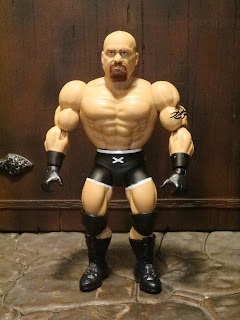 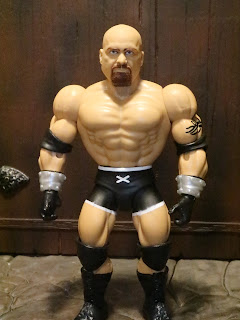 The Positives:
* Underneath his armor you've got a pretty standard Goldberg figure. Tat's not a huge deal to me as I'm totally buying these because of the Masters of the Universe styling but if you're a fan of the vintage Hasbro WWF line or the more modern Mattel throwback WWF line then you might really like how these guys could fit in with those fairly well. They're way more articulated, sure, but the style seems like it could blend in just fine. It's a standard, articulated Goldberg in a smaller scale than Mattel's usual WWE output. 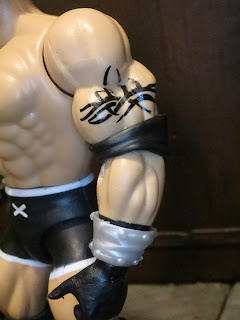 * Goldberg's massive, muscular arms show off his tribal inspired tattoo along with an armband and a wrist cuff. The bands and cuffs are removable (just pop off the hands) so you can customize him a bit or use the pieces to mix and match with other figures in the line. 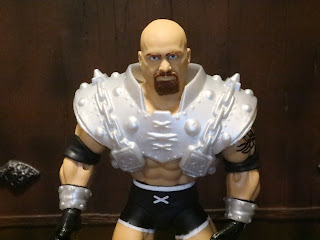 * This version of Goldberg is inspired by Ram Man so he's sporting Ram Man's shoulder armor. Interestingly, this is a completely new piece as it's not reused from the Masters of the Universe Classics Ram Man. It's not from the Origins Ram Man, either. It's really cool armor and it looks great on the figure. I'm sure customizers will find plenty to do with it, too. It's pretty unique in MOTU from what we've seen so far. 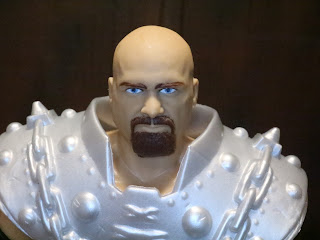 * This version of Goldberg looks like Bill Goldberg so that's a plus. The headsculpts on these look fairly realistic and only a bit caricatured which makes me wonder if these are reused from figures from Mattel's WWE Basics line. 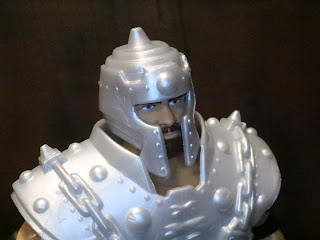 * The Ram Man styled helmet fits Goldberg well and gives him a bit more protection. I'm loving the pointed top which differentiates Goldberg from Ram Man. Goldberg is a human jackhammer so he needs a pointy tip while Ram Man is into ramming things, so the blunt tip is better for him. 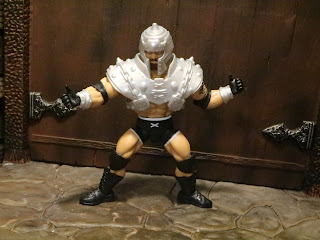 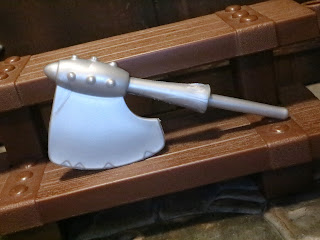 * Goldberg also comes with what looks to be the same axe as the MOTU Origins Ram Man. I haven't managed to acquire one yet so I can't say for certain but from pictures it seems to be the same. 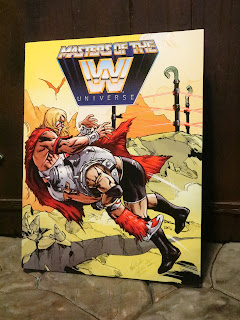 * Goldberg comes with a small minicomic that features a bio on the character and a one-page comic. I like how personalized each comic is, especially compared to the MOTU Origin figures which share a minicomic with each figure in the series. The cover is an homage to the vintage minicomic "He-Man Meets Ram Man" and shows Goldberg jackhammering the Ultimate Warrior. 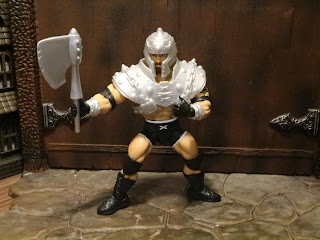 Goldberg isn't one of my favorite wrestlers but I was really looking forward to this figure since I love Ram Man so much. This is a cool Goldberg figure that could really be made to fit in with a MOTU collection or used as the basis for some cool customs. Since these figures can have body parts swapped so easily I think that's definitely a valid positive for them since it's part of the "play pattern." Goldberg is Epic and you're really getting a lot of coolness here. Cool armor, a cool weapon, and a pretty cool little minicomic. Not bad if you can find him! the distribution on this line it terrible which is a real shame!
This is the first figure of Goldberg I've reviewed. For more Masters of the WWE Universe Reviews check out the following:
Becky Lynch
Braun Strowman
Faker John Cena
"The Fiend" Bray Wyatt
Finn Balor
Grayskull Mania
Jake "The Snake" Roberts
"Macho Man" Randy Savage
Mr. T
The New Day
Rattlesnake Mountain Ring
Rey Mysterio
The Rock
Roman Reigns
Seth Rollins
Sting
Triple H
Ultimate Warrior
Undertaker
Posted by Barbecue17 at 4/19/2021