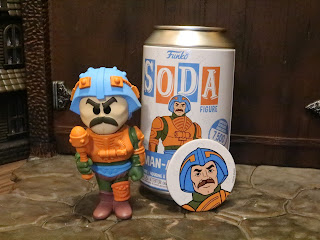 Ready for another Vinyl SODA review? Good because I am too! Today I'm checking out the Vinyl SODA Man-At-Amrs, one of the four Masters of the Universe items that Funko offered up at the Spring 2021 Funko Virtual Con. For a line that's only a little over a year old now The Vinyl SODA MOTU offerings are fairly robust. Man-At-Arms was released as a "limited" run of 7,500 with part of that run being a chase variant based on snake Man-At-Arms from the Mike Young Productions animated series. So far as I can recall Snake Man-At-Arms and Battle Mode Kobra Khan are the first chase variants in this line to have unique sculpts. That's kind of frustrating, really. The paint variants were OK but new sculpts seems kind of frustrating, especially due to how limited these are and the fact that they come blind packaged. Oh well, at least Man-At-Arms himself is really cool. Let's check this one out after the break... 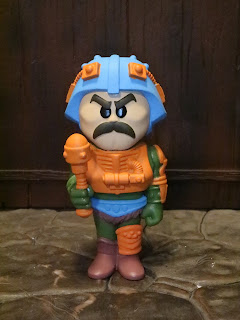 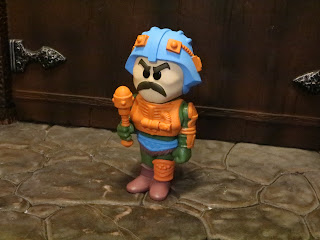 * These are simple, stylized vinyl figures with no articulation. They sure look nice on display, though. The MOTU Vinyl SODA line looks amazing on a shelf together and Man-At-Arms is an excellent addition to a line that's short on heroes. 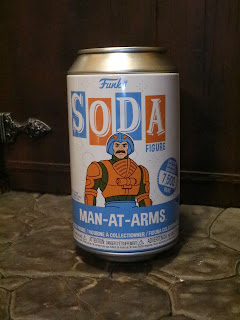 * I love the cans these come in! The soda can design is so incredibly cool and makes for a rather unique display piece on a shelf. Man-At-Arms soda would probably be something very classic, like a very strong cola with a lot of flavor, maybe less sweet and more spice? The can displays all of the expected labels while the back shows off the figure and includes all of the legal info, etc. The top of the can separates so you could use the can to store trinkets as well, and it's even sculpted to look like the top of a soda can. It's made from a much more durable metal than your average soda can, too, so it's quite a nice collectible. 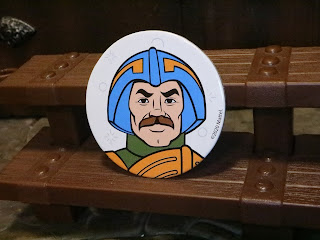 *   Inside the can is a round, sturdy cardboard disc. It's kind of like a POG, though a bit larger. On the front is a picture of Man-At-Arms while the back has the edition size (1/ 6,250). 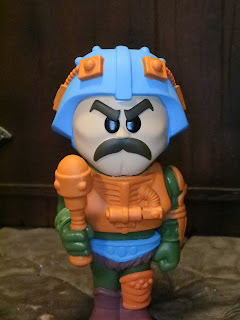 * The sculpt is really cool on Man-At-Arms. While the art on the can shows the Filmation Man-At-Arms art this toy is a mixture. The head has a mustache like the cartoon but the body is definitely based on the armor of the vintage toy. The paintwork is neat and clean and there's a lot of detail on Man-At-Arms compared with some of the other figures in the line. 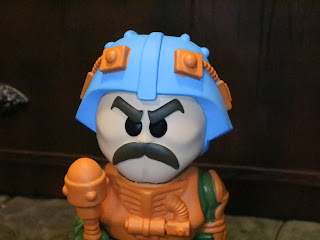 * Here's a closer look at Man-At-Arms' head sculpt. I love the look of his eyebrows and his mustache! There's a lot of detail on his helmet, too. 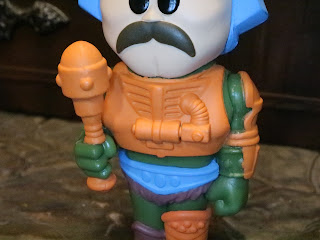 * And here's a close up of Man-At-Arms' cool battle staff and his armor. Seriously, this is nice work for a stylized vinyl figure! 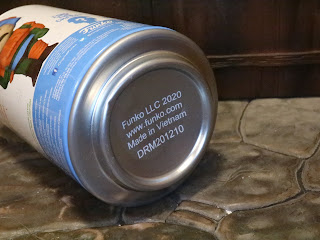 * It might be tough to see from a picture but the bottom of the can came dented to the point that it's tough to get the can to stand up properly. I had to use something to straighten it out and while it stands fine now it's still dented. This one came straight from Funko, too, and it was in a small cardboard box inside of a shipping box, so the problem had to have occurred before it was shipped. 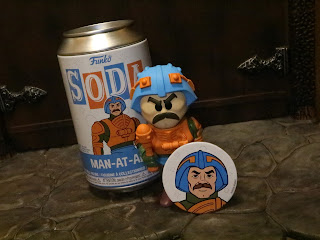 The Vinyl Soda line has been very consistent and Man-At-Arms is another Great addition. I love the Filmation styled head mixed with the vintage toy's asymmetrical armor. Funko is doing a really nice job on these and so far as I can tell this seems to be the most popular new product range they've put out since POP! vinyls themselves. These are way cooler than some of their other endeavors for sure. What do you think about Vinyl SODA? Are you collecting this series? Which properties are you picking up and what properties do you hope to see? Start a discussion in the comments below!

I've reviewed so many figures of Man-At-Arms, AKA Duncan, that he has his own review archive. Check out the Man-At-Armory for all of my Man-At-Arms reviews!

For more reviews from Vinyl Soda check out the following: