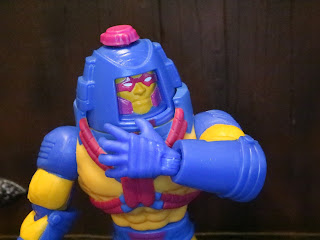 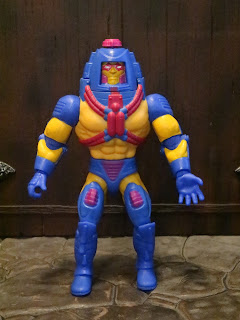 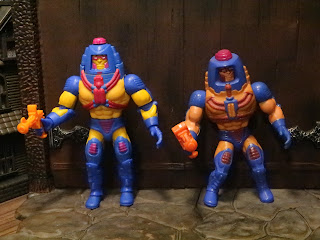 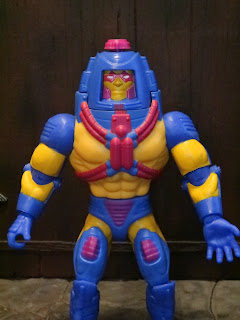 The Positives:
* Man-E-Faces is another very faithful translation of a vintage toy onto the Origins body type. Like the vintage toy Man-E-Faces has a completely new and unique torso that houses his action feature. The paintwork is quite neat and the colors are very bold. Even Man-E-faces skin is brighter and more orange than the vintage toy (which had some color variations during its run). What exactly is Man-E-Faces supposed to be, anyways? Most of the minicomics and promotional materials (including the Filmation cartoon series) portray Man-E-Faces as an actor who at some point was cursed or controlled by Skeletor. His costume always made me think more of an astronaut or perhaps an underground miner of sorts who was afflicted by some alien entity. 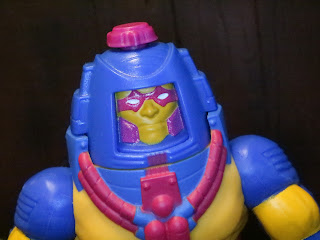 * Man-E-Faces (real name Perkaedo) has a fantastic headsculpt. I love the helmeted look of this figure and the colors of the paintwork on his face. The base of the helmet does rotate so you can have Man-E-Faces look around rather than just having him stare forward, which is a nice touch. Interestingly, you'll notice that Mattel did change the gear on the front of his helmet. Take a look at the vintage figure and take one guess why! Probably a good choice. 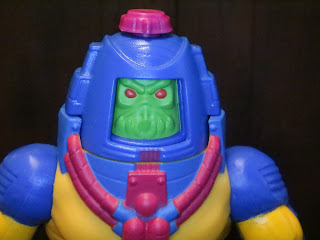 * Like every version of Man-E-Faces I can think of when you turn the purple knob on top of the helmet a cylinder inside rotates, allowing a new face to appear. next up is the monster face, a terrifying green beast! 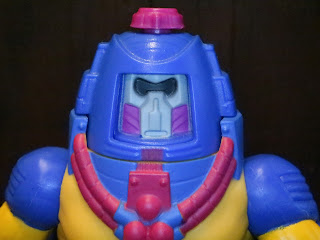 * Last up is the robot face for Man-E-Faces. It's cool and while I know it's a robot face now as a kid I sometimes pretended it was the faceplate for his suit's life support, so essentially an oxygen mask and face shield. 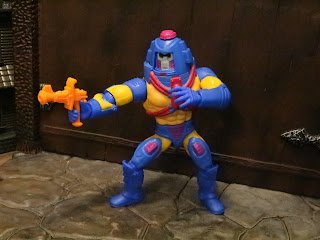 * The MOTU Origins figures are aesthetically similar to the vintage toys but with more modern articulation. While their bulky frames make the articulation a bit clumsy, they do feel like an evolution of the vintage line. Imagine what you would get if you mixed a vintage figure with a Masters of the Universe Classics figure. They're quite fun to play with and pretty durable, feeling more like a toy than a collectible.
* They're also modular. Like the Masters of the WWE universe figures, the arms, hands, and torso can be easily separated to make your own lazy boy customs! 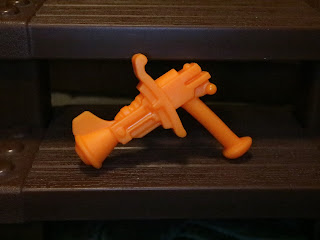 * I really like Man-E-Faces' laser pistol. It's actually a bit smaller than the vintage toy and the detail is way sharper and crisper. It's a great accessory for the figure and he looks slick holding it. It just meshes really well with his retro spaceman vibe. 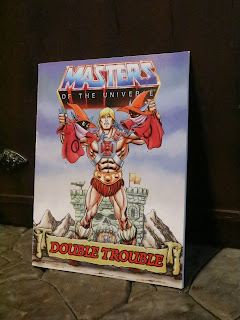 *  The Origins series 2 figures all come with the same minicomic: "Double Trouble." It's a cool little comic that features the series 2 characters and it adds a nice little something to the overall package. I like the cover! 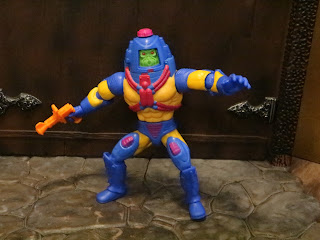 I'm really, really pleased with how Man-E-Faces turned out! When series 1 of Masters of the Universe Origins hit last year I was a bit iffy on it but the series 2 and 3 figures have been excellent (I haven't gotten my hands on series 4 yet) and there is a lot of play value here. Man-E-Faces is another hit and another Epic figure in this line. For the price you're getting a lot of coolness here and Man-E-Faces looks great like this. He's one of my favorites so far! It's nice to see that even 37-38 years later, the characters from the second series of Masters of the Universe are still beloved by so many!