This week was a bit different as we finally got to see my wife's parents after 16 months of being separated. Wow! They came for a visit over Easter and it was great to get to spend some time with them. There was a lot of cleaning prep and such (our guest suite hadn't been used in a year and a half) and then once everyone was here we were mostly busy visiting. Also, as of today my wife and I have been vaccinated for 2 weeks, so that's a big deal! We've been busy with company and Easter and, yeah, I was down for a day or so with what I feared was the making of a wicked sinus infection (the pollen is horrible right now) but, still, lots of stuff to report, starting with last week's episode of The Falcon and The Winter Soldier.... 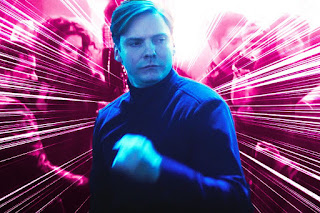 Last week's episode of TF&TWS was excellent as we got the return of both Sharon Carter and Baron Helmut Zemo. Getting to see those two team up with Bucky and Falcon in Madripoor was amazing and the action there was some of the best yet. Poor Sharon really did get a raw deal, didn't she? Who thinks she might be the mysterious Power Broker? Anyways, despite everything else good about this episode the absolute standout is Zemo. He's just incredible though his awesomely awkward dancing is definitely one of my favorite memes in quite some time. Seriously, director Kari Skogland should have went full on David Lynch and just given us five straight minutes of Zemo dancing. This show is another hit and my only complaint about this episode was that we didn't get much of Walker Captain America. I'm kind of starting to like him in a way. He's not Cap by any means but I do want to see him succeed. I watched this episode twice over the past week and I'm ready for tonight's episode!
More after the break... 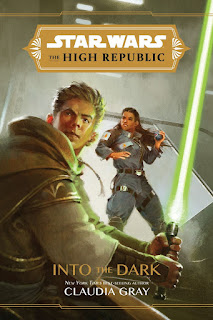 I recently finished Into the Dark by Claudia Gray, another tale set in the new Star Wars: The High Republic era. If there has been a more consistently excellent writer in the new canon than Claudia Gray I can't recall them right now. Into the Dark is definitely the best of the High Republic novels so far, telling a smaller and more focused story about a group of Jedi and the crew of a small cargo ship caught aboard an ancient, abandoned, and Dark Side filled space station due to the Great Disaster of the Legacy Run being destroyed in hyperspace. The characters are memorable, the pacing is excellent, and everything feels really fun and inventive. If you're a fan of an old fashioned Star Wars adventure with some horror elements thrown in then you shouldn't be disappointed with this one. Gray's a fantastic writer and she nicely balances a diverse cast of characters that all stand out. I'm enjoying the High Republic era and while ideally you should read Light of the Jedi before this one, it's not completely necessary as the book explains the major plot points from Light that effect the characters here. Solid stuff and one of the best Star Wars novels I've read in recent memory. 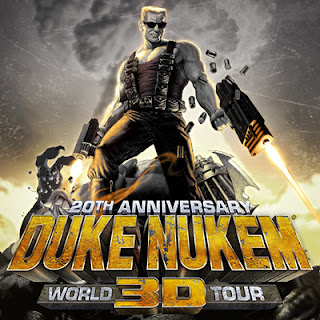 Duke Nukem 64 was one of my favorite games on my Nintendo 64 and I have so many great memories of playing it with one of my best friends growing up. A couple of weeks ago I downloaded Duke Nukem 3D: 20th Anniversary World Tour on the Nintendo Switch and had a good time playing through this port of the original PC version with an all new fifth campaign. It was super fun playing this game again. I hadn't played the original PC version of Duke 3D all the way through so it was fun spotting the differences from the N64 version and the new levels I had never experienced. Considering the way things are these days I always wonder if Duke Nukem has any chance of ever being fully revived as a franchise. 2011's Duke Nukem Forever wasn't very good and it seems that Duke would need some major changes to be viable in the 2020s.
This was a light week but we still have to finish up with the most popular reviews of the week:
Lastly, let's check out the most popular reviews of the past week. Not a whole lot of changes this week, oddly enough...
Mother Boxes from DC Comics Multiverse: Justice League is a review from 2017 that shot up in popularity no doubt due to how well received the Snyder cut of Justice League has been. These were a build an accessory that came with a few of the Walmart exclusive figures back when Mattel still had the DC license. This is its third week on the list so folks are still way into this.
Land Shark from Hot Wheels Premium: Masters of the Universe is proving to be a hit and is on its second week. The Land Shark is probably my favorite vehicle in the vintage MOTU line and  Hot Wheels did a heck of a job with it.
The Scientist from Fortnite: Legendary Series is the only of Jazwares' deluxe Brawlers I've found so far. His bulkiness hurts his articulation and he has a hard time holding his weapons but he has some cool accessories and a great design. This his third week on the list. On a related note, Hasbro showed off their first Fortnite preorder and it's not very impressive. $40 bucks and it comes with just an umbrella? What in the world?
Battle Mode Kobra Khan from Vinyl SODA is the first chase variant from Funko's Vinyl SODA line I've managed to get and I was pretty thrilled to open a can and find him in there. I don't like snakes at all in real life but I love the MOTU Snakemen and I usually put Kobra Khan with them rather than with the Evil Warriors.
Aerial Threat from Fortnite: Legendary Series is probably the most boring figure in the line. I'm just not a sports fan but apparently plenty of other people are. His weapons are nice, though, as is his cool zombie soccer ball companion.
Trap Jaw from Masters of the Universe Origins adds another MOTU figure to the list this week. This guy turned out pretty nice. I actually found series four this week, too, but it'll be a minute before I get around to reviewing them.
That's it for this week! Tonight we're definitely watching The Falcon and the Winter Soldier and we may follow that up with Captain Marvel. Could Endgame be finished by the end of the weekend? We'll see!
Posted by Barbecue17 at 4/09/2021