Action Figure Review: Scare Glow from Masters of the Universe Origins by Mattel 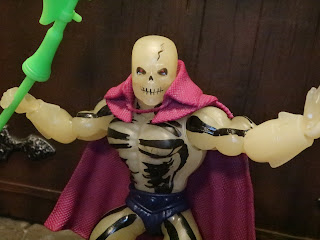 The distribution on Mattel's Masters of the Universe Origin line hasn't been very good and it's been pretty tough to find most of the figures in the line other than the series 1 releases. Scare Glow is part of series 2 and the last figure from that series that I found. Yeah, he's a 2020 release but I've finally got my hands on him. Scare Glow is probably one of the most exciting releases in this series so far as it's a great way for most fans to get a vintage inspired Scare Glow without having to break the bank and live off of Ramen for the next 6-12 months. Yeah, the vintage Scare Glow might not be that expensive but he's definitely pricy, especially if you're trying to acquire him complete with his cape and halberd. This guy's still not easy to acquire but he is a good bit cheaper. Let's check out Scare Glow after the break and see how the cult favorite of the vintage MOTU line has fared in the Origins series.... 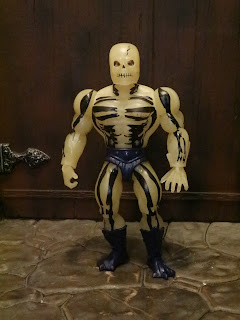 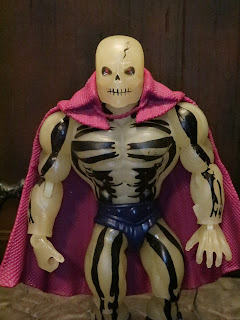 The Positives:
* Scare Glow is a relatively simple figure (a glow in the dark skeleton in a purple cape) but there's something about him that's just brilliant. I don't know how I missed out on the vintage Scare Glow (around 1986 and 1987 was when I was really into MOTU) but this guy looks more like his vintage self than any of the other figures in the line. He's still got the painted on bones, capturing the vintage aesthetic, and this time he has a molded plastic cape rather than a fabric cape. I would have preferred a fabric cape but this one isn't bad and you can still pose Scareglow in plenty of eerie ways. 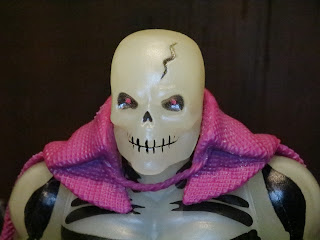 * I've always liked the simple skeleton headsculpt for Scare Glow and he looks great in Origins. The eye are pretty spooky and the crack on his skull looks great, giving him something that helps him feel less generic. 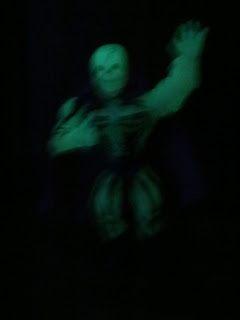 * Does Scare Glow? You better believe it! I suck at taking glow in the dark pictures but, yeah, he glows pretty nicely with a terrifying green glow. What a spooky specter! 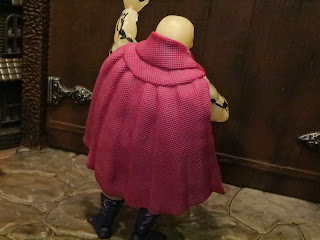 * The cape is made from a rubbery plastic but it looks great. I really like the color and the texture given to the material. The texture really stands out on the cape, especially on the mantle. 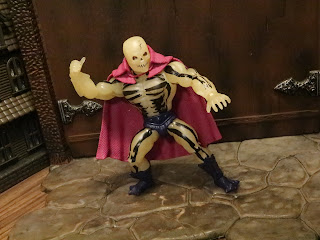 * The MOTU Origins line has figures built like the vintage toys but with modern articulation. While their bulky frames make the articulation a bit clumsy, they do feel like an evolution of the vintage line. Imagine what you would get if you mixed a vintage figure with a MOTUC figure. They're quite fun to play with and they feel very sturdy.
* They're also modular and can be easily separated to make your own lazy boy customs! 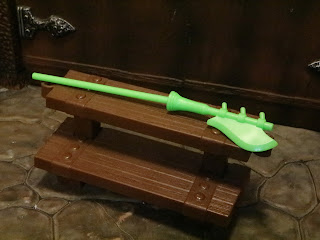 * Scare Glow comes with his neon green halberd, just like the vintage toy. It's a cool accessory and it completes his look nicely. 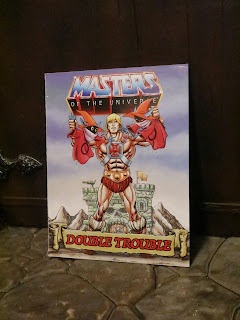 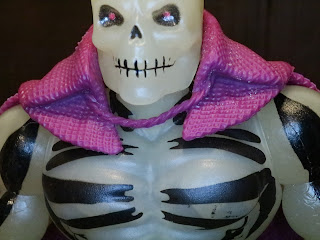 The Negatives:
* I haven't had any problems with it but, wow, that plastic collar for Scare Glows cape is awfully thin. This really seems like a part that could tear pretty easily if you were really posing this guy quite a bit for pictures or just messing around with him. 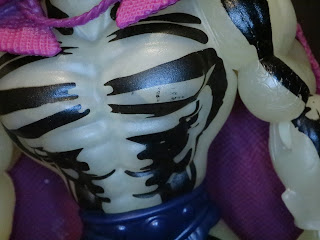 * The print of the negative space for Scare Glow's bones looks pretty good overall but there are definitely some smudgy areas that are a bit of an eyesore. 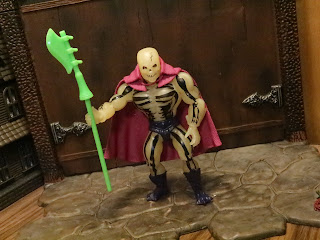 Being able to grab a vintage inspired Scare Glow for $15 bucks? Sign me up! Despite the small issues I have with this guy I still really, really like him. I've seriously considered dropping the scratch for a vintage Scare Glow a few times previously and still may in the future but having this guy in hand definitely feels very, very satisfying. Does anyone else feel like he's the closest to his vintage counterpart of any figure in the Origins line this far? he's a Great and a 1/2 figure and I really hope everyone who wants one can get their hands on him. He's just so much fun!