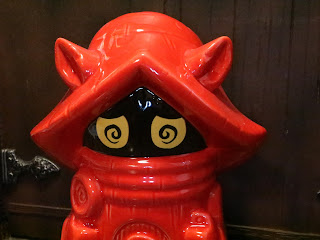 Guess who's just a bit late for March Magic? Orko! Yeah, I originally intended for the Geeki Tikis Orko mug to be one of the installments for last month's celebration but, unfortunately, it just didn't happen. Oh well! Do I really need any excuse to review an Orko item? Nope! Orko is the fourth of the Geeki Tikis mugs I've reviewed and I really like him. Not as much as Mer-Man, of course, but he's up there. Ready for a look at another Masters of the Universe mug? Then join me after the break... 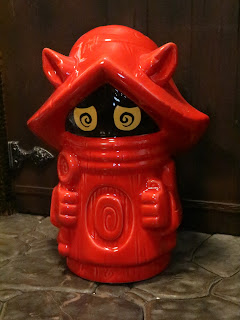 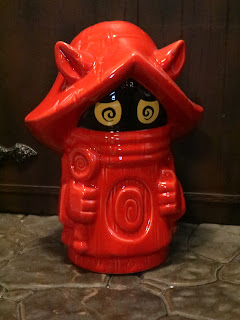 * Orko looks very, very cool. He's molded in a nice, deep red color that really pops out on the shelf. It's definitely different than the usual red we see on Orko but it's gorgeous and works super nicely for a product like this. Orko has some paintwork around his face and I really like it. I wasn't thrilled with the paint applications on He-Man but I think it works really nicely on Orko. 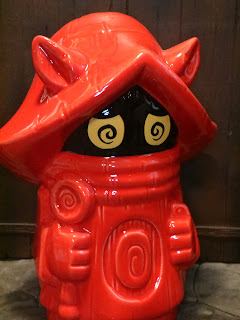 * These mugs are made from ceramic but they are sculpted to look like they are carved from wood. The detail is really nice, especially in areas like the "O" on Orko's shirt. The painted eyes are cool, too, especially with the little swirls in them.

* I'm also really loving that Okro is carrying his wand! It's a nice detail that just adds a little something extra to the overall design. 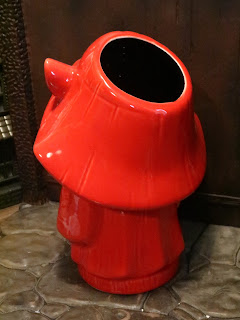 * There's not a ton of detail on the back but you can see that the hole for the mug to hold a drink is angled and worked into Orko's mage's hat. He's also a bit shorter than the other mugs which is a nice touch. I like the variation in size for these although I've hear from others that it's an unpopular feature. I have no intention of drinking from these, however, as they're just for display. 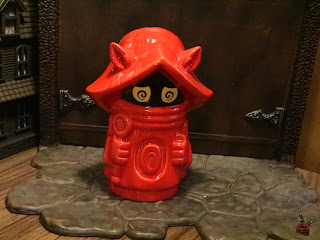 Orko is pretty cool and in ranking these thus far I'd rate him above He-Man but below Battle Cat and Mer-Man (Mer-Man is still my favorite). He's very colorful and the set overall just makes for a striking shelf display. 2021 is shaping up to be an amazing year for Masters of the Universe collectibles with Mattel, Funko, Tweeterhead, Mondo, and a few other companies putting out some excellent stuff but this might be the most unique MOTU line of 2021. Orko is a Good and a 1/2 mug and a really fun item for Orko fans. Oddly enough, this is the second Orko mug in my collection as I also own the 80's Tees Orko mug from a few years back.
If you're an Orko fan I've also reviewed the MOTU Origins Orko, Super7's vintage styled Orko and Shadow Orko, Sideshow's exclusive Orko statue, the green Orko M.U.S.C.L.E. minifigure from the #1 Masters of the Universe set by Super7, The Loyal Subjects Orko, the Orko pin from the GameStop Funko Masters of the Universe box, the Orko POP! + Pez dispenser, the POP! Orko #566, the Dorbz Orko, the Pint Size Heroes Orko, the Monogram International Orko figural bag clip, the standard Orko ReAction figure, and the boxed ReAction Orko (Cartoon Colors).
For more mugs from Geeki Tikis check out the following:
Battle Cat
He-Man
Mer-Man
Posted by Barbecue17 at 4/10/2021