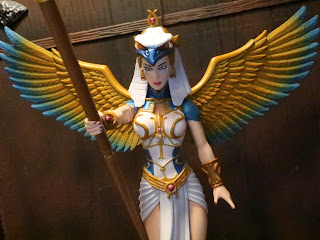 For today's installment of Masters of the Universe Month 2021 I'm checking out the Sorceress in her classic paint scheme from NECA's 2005 Masters of the Universe "staction" line. Now if you've been keeping up with Masters of the Universe Month 2021 you're probably wondering why I'm reviewing the Sorceress, a character originally released in the 1987 series of figures. Isn't the focus of this year's MOTU month the figures and toys from the vintage 1983 series of figures? Yes it is. So why am I reviewing the Sorceress? Because she comes with Zoar the falcon, who was a vintage 1983 release. Further showcasing the theme of symmetry in the 1983 line Mattel released both Zoar and Screeech, the heroic and evil falcons. Originally Zoar was a male bird who was a messenger for the Goddess/ Sorceress but the Filmation series introduced the idea of Zoar as being a form of the Sorceress herself. The Mike Young Productions cartoon also retained the idea of Zoar as being the spirit form of the Sorceress and it's been a pretty prominent part of the MOTU mythos ever since.

Anyways, here's a great history of NECA's 2005 Masters of the Universe line to get you up to speed if you're unfamiliar with the "stactions." The line was intended to complement/ complete Mattel's 200x line which was missing some key characters from the MYP cartoon and never got the chance to cover other fan favorites. The Sorceress was released in the third series of figures in 2006 but this version is the Classic Deco or Vintage Colors Variant. It was released as an exclusive through Action Figure Xpress which, so far as I can tell, doesn't exist anymore. NECA took a few of the MOTU mini-statues/ stactions and gave them paintjobs to match the vintage toyline colors and these proved to be pretty popular with fans. Let's take a look at the Sorceress and Zoar in their classic colors after the break... 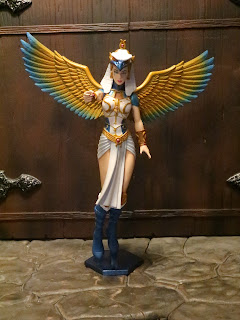 The Facts:
Height: 6 5/8ths inches (with stand)
Articulation: None
Accessories: Zoar, staff, and base.
Designed by: Four Horsemen Studios
Year of Release: 2006 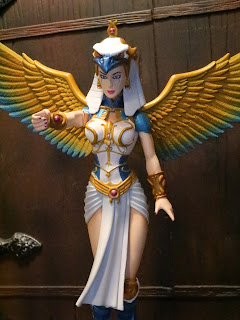 The Positives:
* If you want to know what the absolute best looking line of Masters of the Universe toys ever is it might just be the NECA mini-statues (the Sideshow and Tweeterhead statues make a strong case, too). The focus on sculpting and detail in this line is incredible and it really feels like the Four Horseman really had the chance to do exactly what they wanted to do. The Sorceress' Egyptian inspired motif is gorgeous and she looks even better in these classic colors. The orange and blue highlights really make the Sorceress pop. I like the basic design of the Sorceress in the 200x era but the brighter colors really enhance her. 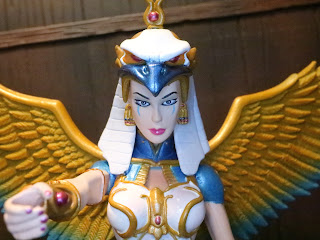 * Sorceress is quite lovely, too, with a great facesculpt and a really cool hood. I love the detail on her hood! You can definitely see the inspiration from a classic Egyptian headpiece on the sides of the hood for sure. There was a lot of interesting details and reinterpretations of costumes in the 200x era and while I love the old-school looks for the characters I'm really eager to see the characters reimagined again at some point. I think that's what I love about the lines from Mondo, Sideshow, and Tweeterhead. They have a classic feel but there's a lot of new design elements present. 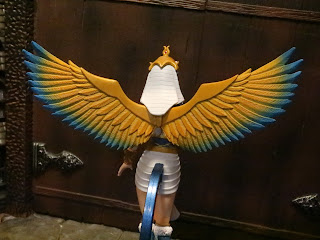 * Check out her wings! The Sorceress is posed with her wing spread out an the detail is excellent. Each feather is lovingly captured and the orange and blue paint just really looks fantastic. 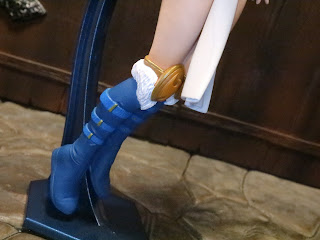 * The Sorceress is permanently attached to a "flight stand" which keeps her in a hovering position. I not only like the look of her boots and kneepads but I also like how her knees and ankles are posed to look as if she's actually hovering. It's good attention to detail and it makes her feel like she really is hovering in place. 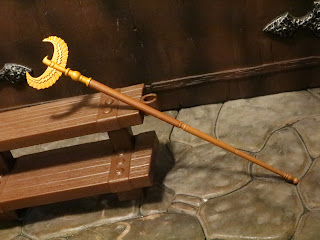 * The Sorceress may not have any articulation (again, these are stactions, or static action figures) but she does come with an accessory: Her staff! It's similar to her classic staff but the headpiece is now gold, looking like some sort of ancient relic. She holds it quite nicely, too. 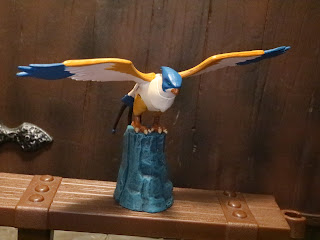 * And here is Zoar, AKA the reason why the Sorceress gets to show up in Masters of the Universe month 2021. Zoar is also given the classic colors although the pattern is a bit different. Zoar is posed perched on a piece of rock that definitely has a very "Grayskull green" look to it. 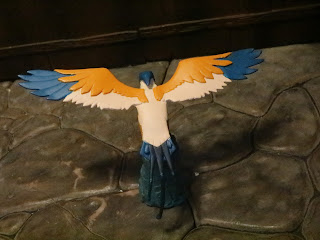 * From the back you can see more of the fairly intricate color scheme. It's nice work, particularly for an accessory. 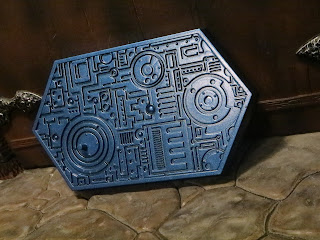 * While the Sorceress can hover on her own thanks to the flight stand attached to her she still includes a display stand with lots of technical details. These figures are made from a sturdy plastic (with softer plastic details) so they're not incredibly fragile like you would think of a statue typically being. They're very similar in construction to NECA and McFarlane products from that era. It seems that all of the Heroic Warriors came with blue stands, so NECA had some sort of color coding going on. 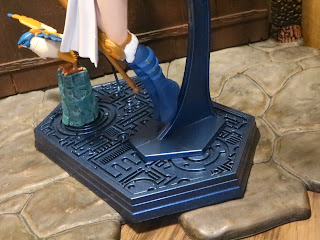 The Negatives:
* While Zoar can plug onto the foot peg on the stand, the Sorceress cannot. You just have to place the base of her flight stand on top. It's not terrible but considering that every other figure could attach to their base it seems odd that she's just on there loose. A unique base or perhaps a second peg that could cold her flight stand would have been preferable though it's possible this was done intentionally so she could hover over the 200x Castle Grayskull playset. 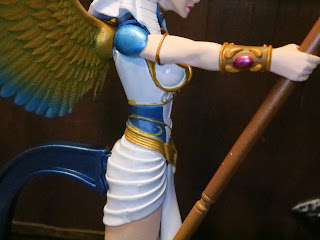 * It's not very noticeable but there are some paint issues on the figure, particularly on the sides. There's some places where the gold is a bit messy, especially when it touches white areas, and there are some weirdly uneven paint spots on the side of her skirt. 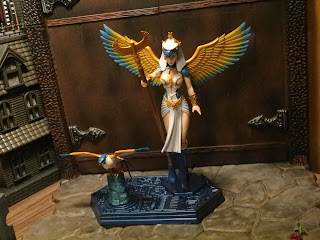 I still think NECA and the Four Horsemen worked magic with this line and it was amazing how they were able to continue the 200x line, even if it was just in the form of ministatues. The Sorceress was probably one of the most significant characters added via the stactions line and the classic deco variant is definitely the better of the two figures. Getting Sorceress and Zoar in one swoop was a nice touch and this is a Great and a 1/2 addition to that line. I'm slowly completing my series of the 200x stactions and maybe someday I'll complete my set.

If you're into birds check out my other reviews of Zoar: The crystal Zoar that came with the MOTUC Nepthu and Zoar from the Mega Construx Castle Grayskull and Panthor at Point Dread set.