JuNe Adventures: Icarius from Masters of the Universe Classics by Mattel 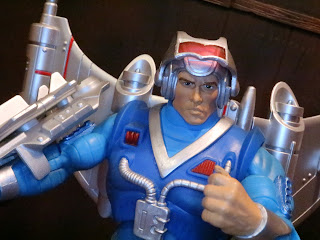 For JuNe Adventures I'm going to be jumping back and forth between reviews from Mattel's 1989 He-Man line and Mattel's Masters of the Universe Classics series which featured characters from the New Adventures of He-Man era alongside MOTU characters from nearly all incarnations of the brand. While MOTUC began in 2008 the line didn't get it's first New Adventures character until 2010 when Optikk joined the line. October 2011 brought the second New Adventures release and the first member of the Galactic Guardians: Icarius! The vintage figure was called Flipshot in the US release but the European release was named Icarius, which I'm assuming is a play on Icarus of Greek Mythology. There were two Greek characters named Icarius: One was a Spartan king and a renowned runner who was the father in law of Odysseus and the other was an Athenian who was hospitable to Dionysus and was murdered by his own shepherds when he introduced them to wine, which they apparently were unfamiliar with.  Neither of these seem like they'd make sense as inspiration for the character's name, though, so I'm going with my original assumption that Icarius is a play on Icarus.

Anyways, I think the issue was that Flipshot was currently being used by another company so Mattel went with the European name. That's cool, and the bio still brings up the point that Lt. Icarius (real name TC Icarius Kaz) is nicknamed Flipshot, so you can still call him Flipshot if you want to. I would argue that Icarius is probably the most popular of the Galactic Protectors (MOTUC started calling them Galactic Protectors rather than Galactic Guardians, probably another licensing issue) and Mattel and the Four Horsemen really went all out to make him a strong MOTUC offering. Let's check out Icarius after the break and see why he's still a high point in the MOTUC line! 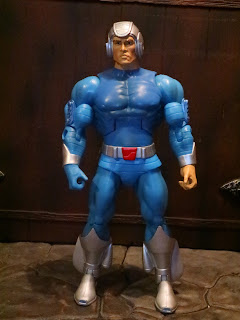 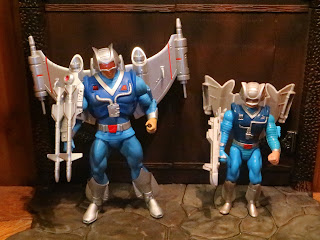 * On the left is the Masters of the Universe Classics Icarius while the vintage Flipshot/ Icarius is on the right. As you can clearly see the Four Horsemen did an incredible job translating this figure faithfully from vintage toy to modern masterpiece! 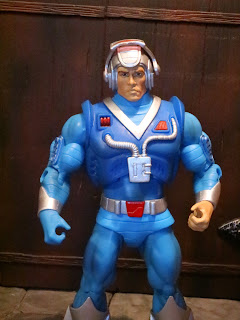 
* Icarius' blue and silver flight suit definitely gives off the vibe of a heroic, futuristic pilot. All of the detail on his torso is actually an armor piece that fits over a standard MOTUC torso and gives him a slightly bulked up appearance with lots of hoses and panels. From what I can recall his arms are unqiue, too, and they have the little ridges on the biceps that activated the action feature on the vintage figure. The paintwork is really sharp and captures Icarius' bold color scheme perfectly. 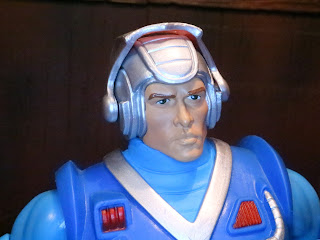 * Flipshot/ Icarius is wearing a helmet that kind of looks like a mixture between a vintage flight cap, or one of those hoods astronauts wear under their helmets, and a retro-space helmet. The sculpt is solid and Icarius has an excellent fportrait (more on that in a minute). 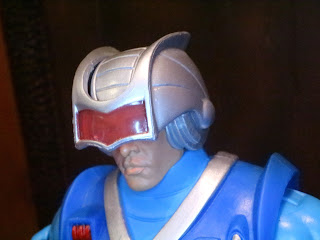 * The visor is removable but it can flip up and down to cover Icarius' eyes with a translucent red visor. It works really well! 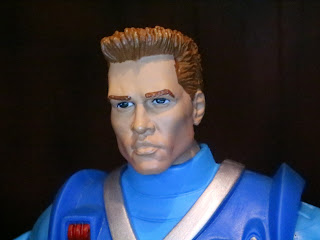 * The vintage figure featured a simple removable helmet, but for the MOTUC version of Flipshot/ Icarius the Four Horsemen opted for a separate unhelmeted head and here it is. And, yes, it looks quite a bit like a young Val Kilmer. Some folks have said he looks like Arnold Schwarzenegger, but they're wrong and you shouldn't believe anything they say. This is clearly Val Kilmer. Why Val Kilmer? Who cares? He's your huckleberry and you're just going to have to go with it. 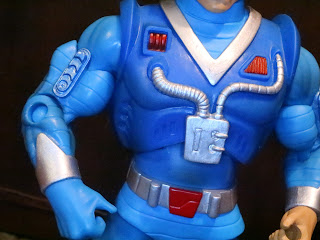 * Here's a better closeup look at all of the details on Icarius' armor. It really is pretty nicely rendered. While the MOTUC line improved in many ways over the years, there was a point where the armor got overly bulky, but Icarius came out at a point when the armor was looking just fine and functioned quite well. 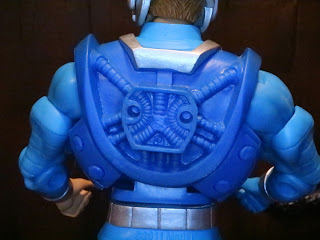 * The back of the armor is really cool, too. The included jetpack plugs into the port on the back of the figure. It looks like there are all kinds of hoses and such to connect it to his suit, so this seems like a pretty high tech rig. 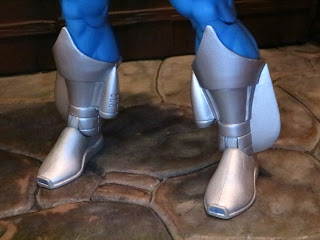 * As we're finishing up looking at Icarius' outfit, let's check out his boots. They have fins on the outside, jets on the inside, and some sort of interesting design or possibly a gadget?) on the toes. 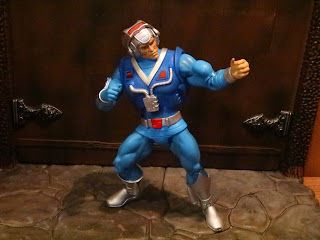 * Icarius has the same articulation as the majority of the MOTUC figures in the line which is just fine. He uses the standard body which is durable, muscular, and has a decent range of motion. While there are plenty of toylines with better articulation than MOTUC these days, I still find myself loving the articulation scheme on this line. 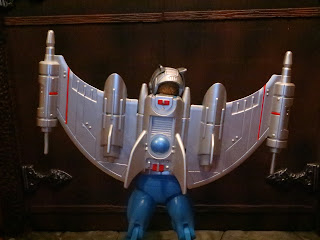 * Let's talk about Icarius' primary feature: His massive jetpack! It has a bit of a retro-futuristic design which I just love. It's also packed with details and plenty of paint applications to bring them all out. 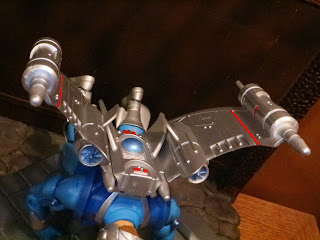 * The wings of the jetpack are even hinged, allowing for you to position them in slightly different ways. 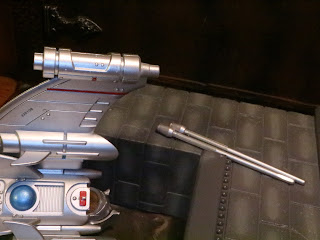 * Lastly, the missiles from the launchers at the ends of the wings are removable. They don't actually fire (and they're in quite snugly, so you can't "flick fire" them) but you can pull them out for playing around. What a neat feature that I wouldn't have even thought about. MOTUC was at it's best when the Four Horsemen were coming up with cool little details like this that really showed how much attention and care they put into these toys. 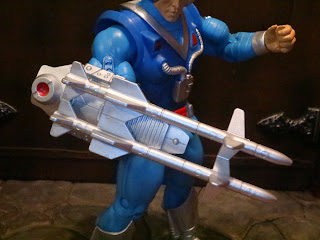 * Icarius is also armed with "concussion grenade wrist rockets" as his primary offensive weapon. The wrist rockets are attached to a shield of sorts that also serves as a launcher. It clips easily on Icarius' forearm! Take notice that his right hand is wearing a glove (since he's launching rockets from it) while his left hand isn't. He's rocking the single gloved look! 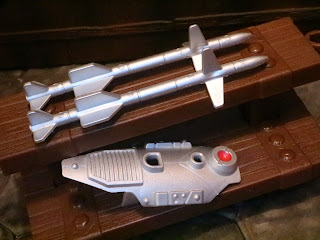 * The missiles are also removable from the launcher/ arm shield, so you've got even more missiles to launch through the air at the Space Mutants! 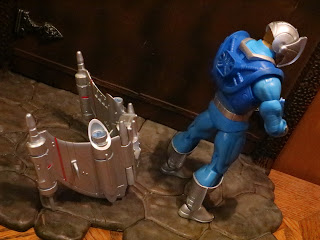 * For the most part Icarius' jetpack stays on well but if you really start playing with the figure it is going to slide off. It's mostly held on with friction and is really intended for display rather than hardcore play. If you're going to swoosh him around your house, just hold the figure rather than the jetpack. 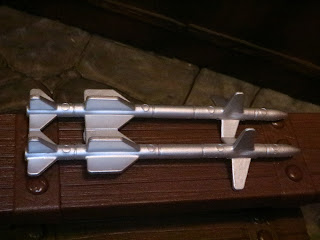 * The removable missiles are quite cool but why can't they be two separate missiles? Wouldn't that have been cooler? 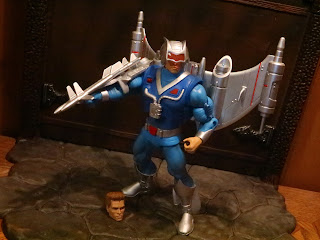 Icarius was the first of the Galactic Protectors/ Galactic Guardians released in Masters of the Universe Classics and, honestly, he's possibly the best as well (although both She-Ra and He-Man are quite good). Despite arguably being the least popular faction to appear in MOTUC, Mattel and the Four Horsemen gave nearly every release the A-list treatment and Icarius soars above many other figures in the line. His accessories are excellent and really set him apart! The Galactic Guardians were sadly never completed in MOTUC (and it's doubtful they ever will be) but we at least got an Epic update to Flipshot/ Icarius.


This is the first figure of Flipshot/ Icarius I've reviewed on the site. For more figures from Mattel's Masters of the Universe Classics check out the following: