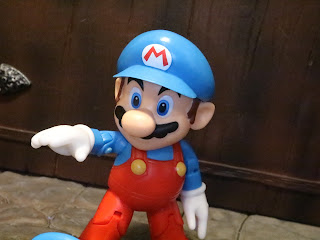 I've loved Super Mario Bros. ever since I was a child. Honestly, it's probably up there with G.I. Joe, Ghostbusters, and Masters of the Universe as the properties I've loved the longest. My seven year old is nuts about Mario and the Nintendo characters too and so we spend a lot of time playing the Nintendo Switch. I loved Jakks Pacific's World of Nintendo line and collected it pretty steadily for years but the distribution was never great on it and the line really started getting to be filled with too many repaints. A few months ago my daughter and I switched out a display shelf in the living room and filled it with the World of Nintendo and Super Mario figures (it looks so good that my wife approved!). Now we've been going back and picking up a few figures we missed out on over the past year or so. Recently GameStop has been getting these in again in their own unique exclusive boxes and we stumbled upon an Ice Mario. This guy was originally released in wave 1-5 of World of Nintendo but it was also released in the Super Mario line a year or so ago. I never picked this version of Mario up previously but seeing him in GameStop a month or so ago while with my daughter convinced me to snag him. Ready to check out the powered up Ice Mario? Then join me after the break... 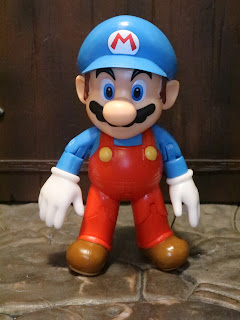 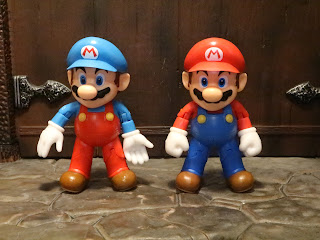 Comparison:
* On the left is Ice Mario while the Mario with Super Star is on the right. The body is the same as the original 1-1 Mario while the head and hands are also reused from previous figures. The only difference here from a basic Mario is the color of his outfit. This guy is a straight up repack, too. 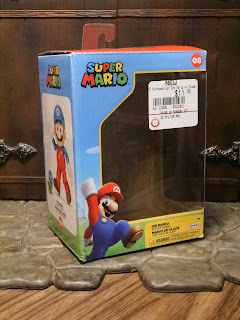 The Packaging:
* If you're interested here's a picture of the boxes these come in. The boxed figures seem to be GameStop exclusives and they're kind of cool. The price isn't any higher than usual, either. 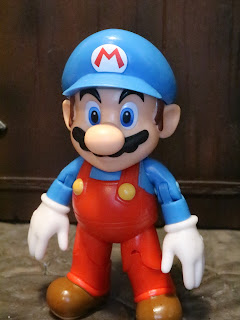 The Positives:
* We've seen this basic Mario body and the open hands before so there's nothing new here sculpt-wise. Still, it's a good, classic looking Mario sculpt and the fact that the line hasn't changed stylistically means that the figures from series 1-1 of World of Nintendo look perfectly fine displayed with the most recent Super Mario releases. The Ice Mario paint is what differentiates this guy from your standard Mario and it's perfectly fine. It's pretty neat and clean with bold, primary colors that stand out. 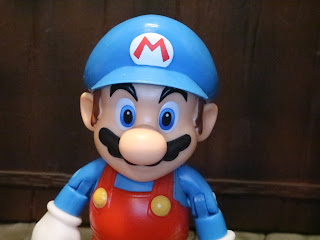 * The headsculpt is also reused but it's still good. Mario looks like Mario. He's one of the most recognizable characters on the planet and he's looked just like this for a pretty long time. Hard to argue with the sculpt here, huh? 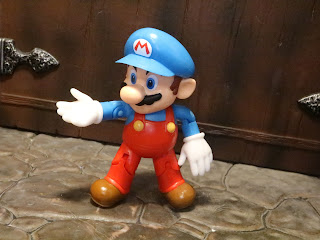 * There's a decent amount of articulation here and while the poses are more static than most collector lines as a toy this is pretty fun. The Nintendo characters just don't lend themselves to super articulated bodies and I think what Jakks has given Mario is perfectly adequate for a mass market retail toy. 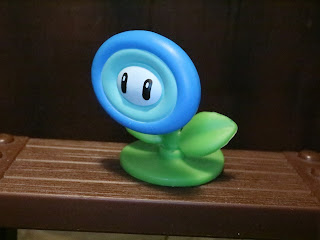 * The Ice Flower is a simple repaint of the Fire Flower, but that's accurate to the games so why expect Jakks to change things? I love the look of the accessories in this line. Jakks Pacific really captured the simple charm of the Nintendo aesthetic with these for sure. 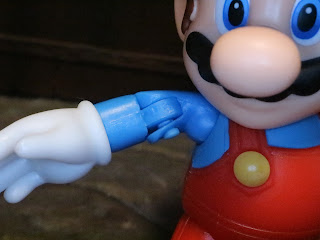 The Negatives:
* Mario's right elbow has a pin that seems to be either too long or coming loose. I'm not too worries about it but it's a bit unsightly. 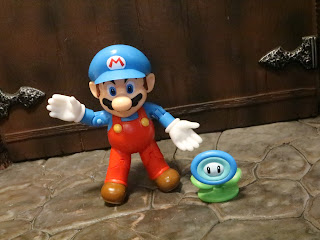 There's nothing amazing about Ice Mario but as a lifelong Nintendo fan with a daughter who is equally enchanted with the world of Nintendo and the Super Mario characters this line is still a dream come true for me. This Ice Mario is a repack of a repaint but if you haven't picked him up before now (like me) then he's a Good purchase. Not one of the best World of Nintendo/ Super Mario figures but not a bad release. Just pretty average. The colors are cool, though, and it's fun to have a display of Mario in his various outfits. I'm still hoping for a caped Mario from Super Mario World and maybe a statue Mario from the Super Mario 3 Tanooki suit to keep the set growing. How about you?
I've reviewed quite a few Mario figures (something I never thought I'd be able to say) including the standard Mario, the 2-4 Mario, the classic Fire Mario, the indestructible Gold Mario, the water-hating Cat Mario, the industrious Mario Maker Mario, the take charge Mario with Cappy, the high flying Racoon Mario, the magical Tanooki Mario, the pint sized Mario from the Dungeon Diorama Set, and the repacked Mario with Super Star.
For more Super Mario figures check out the following:
Dungeon Diorama Set
Fire Bro.
Fire Luigi
Ludwig
Mario with Super Star
Parabones
Piranha Plant