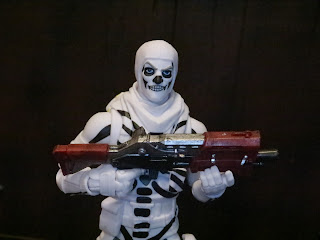 The Skull Trooper (Purple Glow) was the first Fortnite: Legendary Series figure I reviewed back when the line started in 2019 and now, almost two years later, I'm checking out Jazwares' third release of this sculpt: Skull Trooper (Inverted). What's inverted about this guy? Well, he comes packaged upside down of course! Just kidding. Actually, it refers to pattern of the bones on his outfit. Instead of having white bones on a black outfit he's now rocking black bones on white. Hey, it works for Scare Glow, right? Let's check this guy out after the break... 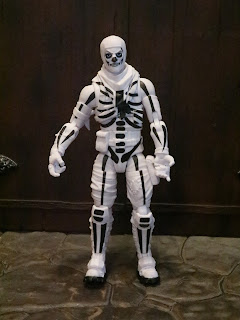 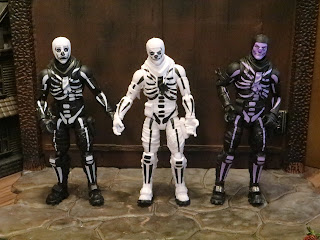 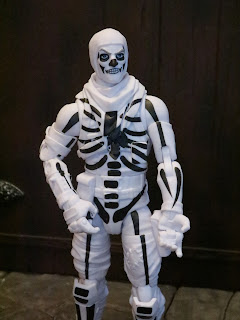 * The Skull Trooper doesn't have any sculpted bones: He's simply a guy in a white tactical jumpsuit with black bones painted on the outfit. He's just a guy in an outfit after all, though the outfit looks quite cool and has a nice complement of tactical pouches, pockets, and straps. The paintwork on the "bones" is really quite sharp and it helps to make this inverted Skull Trooper a rather striking figure. 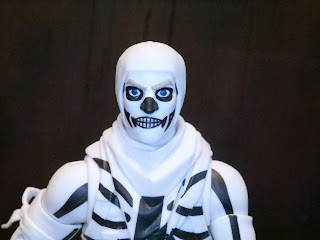 * Like the original figure, the Skull Trooper has three interchangeable face plates. The front half of the head is removable and swaps out very easily. 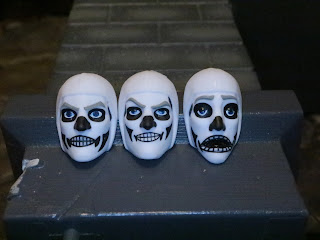 * The figure comes with three faceplates: A standard head with a big skeletal grin, a smirking head, and a surprised head. The paintwork is really impressive and it captures the look and feel of the game perfectly. 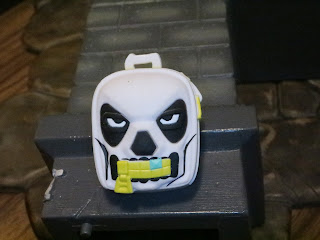 * The Inverted Skull Trooper completes his ensemble with the Grinning Ghoul back bling. It's a sturdy looking backpack with a skeletal face that has a gold grill on the teeth (and one diamond studded tooth1). Flashy! 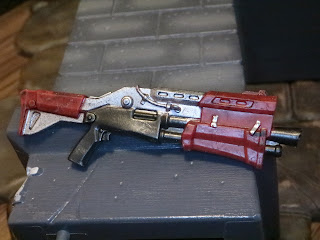 *  We've seen the extremely cool looking Tactical Shotgun before but here it is again. It looks like standard tactical shotgun but it has lots of extras including a more sophisticated stock and a screen of some sort on the right hand side. It's really nicely painted and is just a super slick accessory. 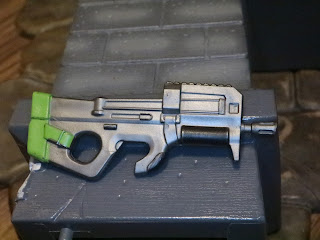 * We just saw this smg with Aerial Threat but here's the Epic and Legendary version of the standard Submachine Gun again. This looks like a modified version of the FN P90 with a cool new paintjob. I've commented before that there's something about the design of these weapons that remind me of the weapon models from GoldenEye 007 on Nintendo 64, so here's a good old RCP90 for you! 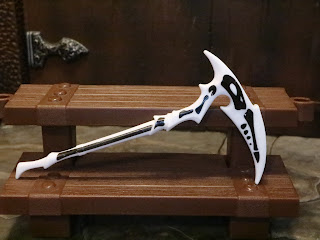 * The Inverted Skull Trooper comes with the appropriately designed white and black version of the Skull Cycle. It's a fairly standard looking harvesting tool but, wow, that paint work is so neat and clean on the side. It looks really nice! 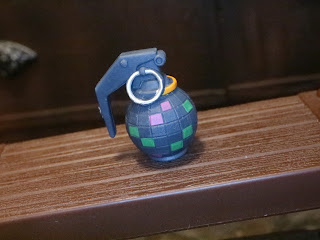 * Another reused accessory is the Boogie Bomb, a grenade that makes the other characters dance. It's a cool looking weapon that looks like a grenade mixed with a disco ball and it actually even has some colored panels on it. I really wonder if Hasbro will be able to keep up the quality paintwork on the accessories like Jazwares has done. Most of Hasbro's 6-inch scaled figures don't have the quality accessories this line has. 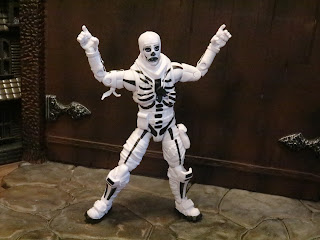 * The Skull Trooper is a good quality figure with lots of useful articulation. These are some very well made, sturdy toys. What else is there to say? 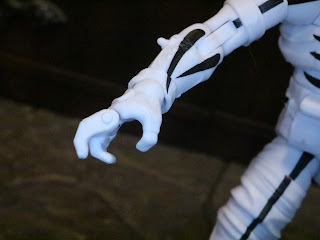 The Negatives:
* I'm still not loving the hinged fingers on these figures as it makes holding their weapons quite difficulty (especially the harvesting tools). It's kind of water under the bridge at this point since Hasbro takes over the 6 inch Fortnite line in 2022, but it is something I wish Jazwares had fixed a year or more ago. 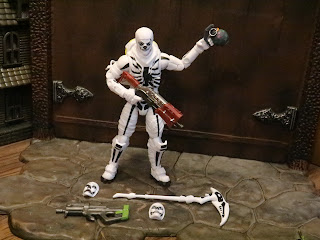 Yeah, he's a repaint, but the Skull Trooper (Inverted) is a solid figure that's very versatile. If you love Fortnite then you'll surely dig the guy but even for those of us who have hardly ever played the game this is the kind of action figure that can fit in multiple lines. He totally looks like he could be a goon for any number of random DC or Marvel supervillains, right? He's still a pretty Epic figure with a lot of value  for your money. It'll be interesting to see if Hasbro can deliver the same quality and value for the price. Their first showing a week or so ago didn't inspire me much but we'll have to wait and see...