Action Figure Review: Becky Lynch from Masters of the WWE Universe by Mattel 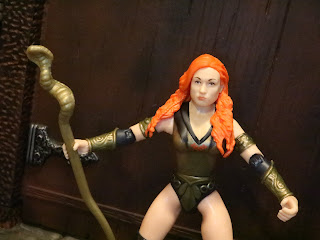 I've finally found my first Masters of the WWE Universe figure of the year and it's Becky Lynch, the Man of WWEternia! Released as part of the fifth series of this Walmart exclusive line I was pretty thrilled to stumble upon her in the toy aisle. After series 2 this line has had some of the worst distribution I've seen in a toyline. Both series 5 and 6 are on store shelves right now and I've only found one figure from series 5 and three from series 6 (if you find the rest of series 5 or Kane help me out!). Anyways, this is Wrestlemania weekend so it seemed fitting to review a Masters of the WWE Universe figure even though I haven't watched wrestling for almost two years now. I really like Becky Lynch, though, and she is perfectly cast as a Teela inspired warrior. Ready to check out The Man? Then let's get ready to rumble after the break... 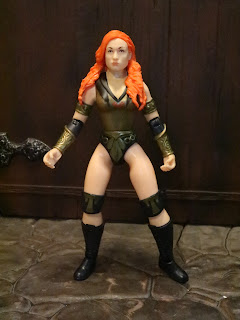 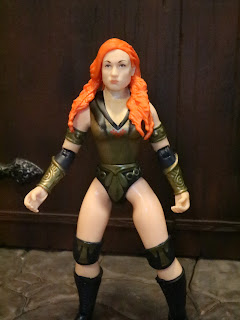 * Honestly, Becky Lynch fits in pretty well in the MOTU style. She has a different torso than the Origins Teela figure but design is cool with black and gold armor and perhaps what is meant to be a stylized heart on her chest. She's got all of the cool bracers and armbands and the belt like Teela but she's also sporting some kneepads and laced up wrestling boots. The kneepads have a stylized "T" on them which maybe stands for "The Man?" I'm not sure. 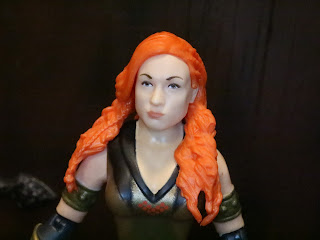 * Mattel has come a long way since their first Becky Lynch figure from 2016 and this headsculpt is way better. This is easily recognizable and it captures one of Lynch's determined expressions quite well. Heck, I wouldn't be shocked if some folks used this headsculpt as a Teela variant. 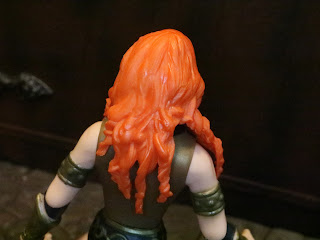 * While Becky Lynch's hair is simply molded in orange plastic the sculpt is really detailed and captures her fair really nicely. It's perfectly fitting for a barbarian fantasy, swords and sorcery world. 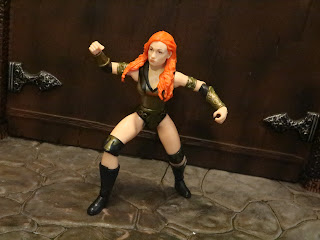 * I like the articulation used on the female MOTU Origins body. It's quite good, maybe even with smoother articulation than the male body. This is the first use of the female body in the MOTWWEU line and it works just fine here, too. In fact, the knee pads cover the awkward knees, so that's a huge advantage Becky Lynch has over the Origins ladies.
* Just like the male figures in the line the women are also modular and the limbs, torso, and head can be easily separated to make your own lazy boy customs! 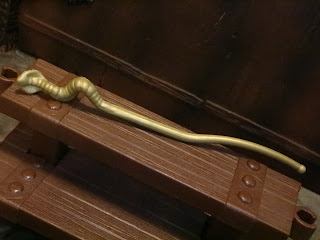 * Becky Lynch includes Teela's staff but now it's molded in gold plastic. The minicomic calls it the Staff of the Warrior Goddess. It's a solid accessory that fits in her hands quite nicely. 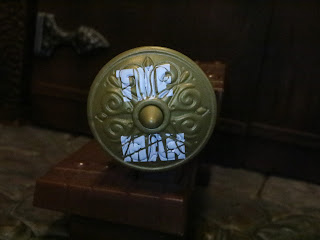 * Becky's shield is a gold remold of Teela's shield, and it's very, very similar to the vintage Teela's shield. Rather than a clip on the back to fit on her wrist this shield has a simple handle for her to hold. It also has her nickname, "The Man," painted on the front because this is known as the "Man-Handling Shield." 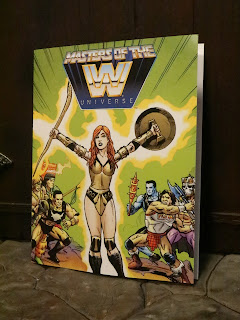 * I really like the little minicomics that come with the Masters of the WWE Universe line. Every figure gets a unique comic and Becky Lynch's has a cover that pays homage to "The Search for Keldor" with Becky in the place of the Sorceress. The inside features a bio and information about her weapons as well as a one page comic depicting Becky Lynch as a prophesied warrior and champion of WWEternia. I'm now convinced that Becky Lynch should be seriously considered to play Teela if a MOTU movie happens anytime soon. I think she could nail it! 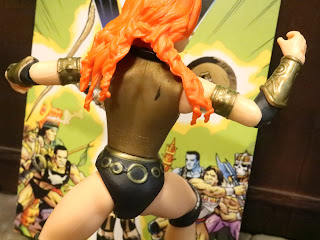 * There's some errant paint slop on the back of her armor. What a shame! 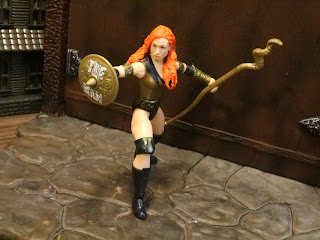 I gotta tell you that I am loving this figure! I was a Becky Lynch fan already but this figure just really feels like it could be a very cool Teela variation or truly another Eternian warrior. Maybe just change out the boots and the shield? Becky Lynch, The Man of WWEternia, is an Epic toy. There's a lot of coolness and play value here and while the classic WWE Superstars tend to be the most popular figures in the line, Becky Lynch is a stellar toy of one of the modern Superstars. How are you using her in your collection. Any cool custom ideas or ways you might fit her in as a true MOTU character? Let us know in the comments!

If you're a fan of Becky Lynch, AKA Rebecca Quinn, also check out my review of the 2016 Becky Lynch from Mattel's Basic WWE line.